Who shut down the shutdown?

Federal workers showed a glimmer of their potential power with sickouts and other largely spontaneous actions. What would it take for unions to step up the fight?

IN THE end, Trump’s wall ended with a cave.

But it took federal workers beginning to snarl traffic at major U.S. airports before he and the Republicans, without really admitting it, backed down and allowed the federal government to be reopened.

Trump had to retreat from his boasts that he would keep the government shut down until he got $5.7 billion in funding for a border wall that few want. But for 35 days — and at an estimated cost of $11 billion, according to the Congressional Budget Office — he kept the government offline for the longest federal shutdown in history, while the Republican establishment stayed silent, afraid to cross Trump when they weren’t openly pandering to him.

During that time, 800,000 federal workers went without paychecks, forcing significant numbers of them to seek help from food banks and other emergency aid. Millions more were impacted as federal services ground to a halt, including cancer patients unable to access medical care, Native Americans cut off from federally administered tribal services, and public housing residents who had their housing threatened. 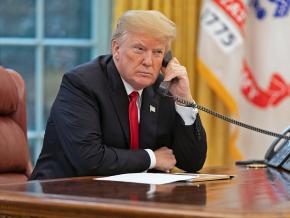 It says a lot about the Trump administration that Commerce Secretary Wilbur Ross — a man whose net worth is $700 million and who routinely pads around in $600 velvet slippers — had no problem telling the media that he didn’t “really quite understand why” so many low-income federal workers were being forced to turn to food banks when they could just “get a loan.”

Ross was only outdone by Trump, who showed he has no idea how grocery stores work when he suggested that local stores would “work along” with federal employees by giving them free food.

It was poetic justice that the Trump administration’s crumbling resolve was probably broken by air traffic controllers, who nearly 40 years ago had their union broken by a Republican president. The controllers’ sickouts snarled air traffic at New York City’s LaGuardia and several other airports, causing well-publicized chaos.

That’s not to mention the other federal workers whose increasing “sick” days off began to throw a major wrench into the workings of multiple federal agencies that millions of people rely on.

But as Trump takes a three-week “time out,” it’s unclear whether he will attempt to force another shutdown when the interim spending measure that ended the shutdown runs out in mid-February.

The media speculation is that his administration will use the time until February 15 to prepare an emergency order to get his border wall, even though legal experts say that would be illegal.

ONE GROUP in Washington that doesn’t deserve credit for putting the pressure on Trump is the Democratic Party, with its new majority in the House of Representatives.

The Democrats weren’t the first to surrender this time, in contrast to their capitulation after three days in January 2018 when they were vowing to fight for undocumented youth to the end.

But they did offer numerous anti-immigrant concessions that would have given Republicans a lot of what they wanted — including $5.7 billion in funding for a so-called “smart wall,” enhanced border security, plus more Border Patrol agents and immigration judges. It was only Trump’s fanaticism that derailed this package of increased immigration controls and the anti-immigrant repression that comes with it.

As Socialist Worker has argued in the past, this isn’t only because the Democrats are spineless when it comes to standing up to the Republicans:

The Democrats’ strategy is the logical outcome for a party that says it stands for immigrant justice to satisfy its more liberal base at election time, but that stands in practice for a status quo where implementing justice would be a social and political threat.

It is no coincidence that the Democratic Party’s actual agenda on immigration issues mirrors that of Corporate America: support for a system that allows immigration to supplement the U.S. workforce at various levels, but that disciplines that workforce by keeping most immigrants in a second-class status.

The three-week window to reopen the government will close fast, and federal workers who are still uncertain when they will receive back pay could be left to scramble for another round of furloughs and forced servitude without pay.

What could head off the next stalemate before it begins?

The Democrats can’t be trusted to stop another shutdown in any way other than capitulation — which seems unlikely given the current balance of forces, even though it would be very much in character.

What the Democrats won’t do is take action that would force the hand of Republicans, if not Trump himself. House Speaker Nancy Pelosi’s idea of a tough stand was meeting the GOP halfway on border security and refusing to allow Trump to give his State of the Union speech.

Many of the unions and liberal groups aligned with the Democratic Party stayed silent during the last shutdown or even championed the Democrats’ willingness to fund repressive anti-immigrant measures as long as there was no new wall construction involved.

A united show of support for federal workers from the entire labor movement could have made a huge difference. But the unions mainly concentrated on providing affected members with support and advice for how to get by without a paycheck — important assistance, but not exactly a militant stance.

DESPITE BEING barred from striking — or even asserting the right to strike — some federal workers did act, though in an unorganized way. By the end of the shutdown, one in 10 Transportation Security Administration screeners was out “sick.” A statement from the unions representing air traffic controllers, flight attendants and pilots declared that there was no way to “calculate the level of risk currently at play” as a result of the shutdown.

One Guardian article by an anonymous federal worker described the sentiment for struggle and solidarity shown by local events providing free dinner and groceries for federal workers and their families:

Small, morale-boosting events like these may not rise to the level necessary to force an end to the shutdown. Nevertheless, they demonstrate a craving for the kind of solidarity that might begin to tip the balance in our favor. So organized labor could support such efforts where they emerge, or help get them going in locations with concentrations of federal staff.

As the shutdown dragged on, frustration with Washington and calls for collective job action began to mount. Association of Flight Attendants President Sara Nelson raised the suggestion of a general strike and urged occupations of lawmakers’ offices:

Go back with the fierce urgency of now to talk with your locals and international unions about all workers joining together — to end this shutdown with a general strike. We can do this. Together. Sí se puede. Every gender, race, culture and creed. The American labor movement. We have the power.

Meanwhile, historian Joseph McCartin, writing in the Washington Post, singled out the importance of the sickout by air traffic controllers in breaking through the impasse in Washington:

The role of air traffic controllers in these events calls to mind a quip attributed to Mark Twain: History doesn’t repeat itself, but occasionally it rhymes. Air traffic controllers revectored the course of U.S. history once before. The illegal strike of the Professional Air Traffic Controllers Organization (PATCO) in 1981 led President Ronald Reagan to fire and replace more than 11,000 controllers, inaugurating an era of diminished worker bargaining power.

In time, we might come to see the controllers’ actions on Friday as a historical bookend, signaling — finally — the end of that era. It also shows that labor still has some power, at least when public opinion is on its side...

Could this event mark a turn as the 1981 strike did? Possibly, for like the PATCO strike it did not occur in a vacuum. PATCO struck just as conservative politics and neoliberal economics were ascending to power; the magnitude of its damage was reinforced by those larger dynamics.

The worker actions that helped end this shutdown came in a very different time, one when the left rather than the right is gaining energy, when economic deregulation and privatization are losing their luster, amid growing public concern about rising inequality and weakened worker bargaining power, and hard on the heels of the successful strike by Los Angeles teachers and the “#RedforEd” teacher mobilizations of 2018.

A small group of strategically placed workers just acted to help bring a widely detested shutdown to an end. They refused to play the role of victim and instead became agents of their own liberation. By doing so, they might have also put the nation on a new political vector.

It has to be underlined, however, that labor’s vast potential to make a mark on national politics needs to be mobilized systematically, and that will require breaking through the conservatism of a union leadership that has lowered its expectations and curbed rank-and-file initiative.

Our side urgently needs to organize to push back. The energy of the tens of thousands — and in some cases, hundreds of thousands — who marched and rallied on this month’s Women’s Marches can be connected to a broader struggle.

We’ll need that and more in the months to come. Trump may have lost this round, and the noose of the “Russiagate” investigation seems to be tightening around him with the arrest of prominent adviser Roger Stone. But he remains the president, with immense power to cause harm.

There’s no time to waste in building the struggles that can pose a real alternative to the reactionary agenda of the Republicans and the caution and concessions of the Democrats.