If Trump gets away with some of his attacks, does that mean the mass outpourings of protest were futile? Leela Yellesetty explains why Marxists take a longer view.

JANUARY SAW the largest protests to ever greet an incoming president--and quite possibly the largest nationwide day of protests in U.S. history. But in the days that followed, Trump moved forward with nearly every aspect of his reactionary agenda that millions of people had come out to oppose.

It remains to be seen, of course, whether he'll get away with all, most or some of it, but it's understandable if people ask the question: Do protests even matter?

On the eve of the inauguration, former Occupy activist Micah White wrote: "Today's social activists have succumbed to one of the most enduring myths of contemporary American protest: the comforting belief that if you can get enough people into the streets from diverse demographics, largely unified behind a clear message, then our representatives will be forced to heed the crowd's wishes."

White went on to list a number of mass demonstrations over the past century that he claimed had failed in achieving their stated aims, culminating with the largest day of global protest in human history on February 15, 2003--George W. Bush dismissed the 10 million people who marched around the world as a "focus group" as he proceeded to launch the invasion of Iraq.

In a similar vein, Zeynep Tufekci wrote in the New York Times that the size of a protest is not a good indicator of its impact on policy, especially in the age of social media, where it takes less organization and effort to bring large numbers of people into the streets.

Tufekci contrasts the Iraq war protests and Occupy with the right-wing Tea Party of the Obama years, which "then got to work on a ferociously focused agenda: identifying and supporting primary candidates to challenge Republicans who did not agree with their demands, keeping close tabs on legislation and pressuring politicians who deviated from a Tea Party platform."

LEAVING ASIDE the fact that the Tea Party "movement" was heavily bankrolled and organized by establishment organizations and the billionaire Koch Brothers, it's worth asking whether the main point of mass protests should be to win elections.

Many in the antiwar movement did draw this conclusion--but as a result, they focused efforts on the failed campaign of pro-war Democrat John Kerry. By the time Barack Obama was elected in 2008, the antiwar movement had effectively collapsed, leaving little organized resistance as Obama--the supposed antiwar candidate--continued to carry out U.S. imperial policy in the Middle East and beyond. 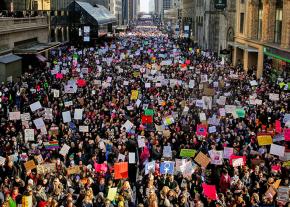 While we agree that a single demonstration is unlikely to achieve much in terms of immediate results, socialists take a different view of the role played by mass protests. As the late writer and artist John Berger described in his masterful 1968 essay on the nature of mass demonstrations:

Theoretically demonstrations are meant to reveal the strength of popular opinion or feeling: theoretically they are an appeal to the democratic conscience of the State. But this presupposes a conscience which is very unlikely to exist.

If the State authority is open to democratic influence, the demonstration will hardly be necessary; if it is not, it is unlikely to be influenced by an empty show of force containing no real threat.

In this sense, Berger wrote, the numbers present at a protest are significant not because of their impact on the state, but on those who participate:

The importance of the numbers involved is to be found in the direct experience of those taking part in or sympathetically witnessing the demonstration. For them the numbers cease to be numbers and become the evidence of their senses, the conclusions of their imagination. The larger the demonstration, the more powerful and immediate (visible, audible, tangible) a metaphor it becomes for their total collective strength.

FOR SOCIALISTS, this impact on consciousness is the most important achievement of mass protests. Even if--and maybe especially when--they are not immediately successful, they reveal how profoundly undemocratic our society is, and how little the powers that be care about what the mass of society believes.

But at the same time, they point to, and build confidence in, a different sort of potential power. In his book Prelude to Revolution about May 1968 in France--which began with student demonstrations and ultimately spread into a mass strike wave--Daniel Singer wrote:

Revision of values is an infectious phenomenon...Do you remember those rare sleepless nights when, lying uncomfortably awake, you vividly recollect the hopes or illusions of youth and set this promise against the fulfillment, when with painful lucidity you ponder the meaning of your life?

Something of that kind all at once happens to thousands, and it happens during the day. Only this collective blues is coupled with collective hope, is really inspired by it. The prospect of change releases the inner censorship. It prompts one to confess that the present is intolerable, to admit it to oneself but also to others. In factories, in offices, groups gather to discuss what can be done. Hackneyed words like "man's hope" or "man's dignity" acquire a fresh meaning.

What's more, the example of May '68 in France should remind us that mass demonstrations can be inspirational and organizational milestones on the road to more militant and radical action. The mass strikes of industrial workers in France really shook the system to its core, because of the economic power workers have at the point of production. But the student protests and actions opened the way for the working class to take center stage.

In a more modest example today, one of the most dramatic moments of the "Uprising of the Airports" after Trump issued his ban on Muslims entering the U.S. was the New York Taxi Workers Alliance holding a one-hour boycott of JFK International Airport. This group of mostly immigrant workers may not have had the confidence to take action without the massive outpouring of people a week earlier that showed how despised Trump's policies are.

IN OUR day-to-day lives, it is difficult for most ordinary people to imagine that we can have a real impact on the way our society is organized.

Mass demonstrations can be an aid in that imagining. Katrina Wallace, a friend who attended the Women's March in Seattle--her first-ever protest--caught on to this right away. "I never saw the point in it before," she said, "standing around waving signs, what could that possibly do? But now I get it. It's not about what it does to them, it's what it does to us, how it changes the people who are there."

Of course, this transformation could be lasting or fleeting, depending on what happens next. Do we channel this energy into electing marginally better candidates, as Democratic Party politicians and many liberal groups suggest, or do we use the opportunity to build the self-organization of ordinary people--to move from demonstrating our collective power to using it?

In her classic pamphlet The Mass Strike, the Polish revolutionary Rosa Luxemburg talked about this process in the context of the 1905 Revolution in Russia, which became known as the "great dress rehearsal" for 1917:

The most precious, lasting thing in the rapid ebb and flow of the wave is its mental sediment: the intellectual, cultural growth of the proletariat, which proceeds by fits and starts, and which offers an inviolable guarantee of their further irresistible progress in the economic as in the political struggle...[T]he apparently "chaotic" strikes and the "disorganized" revolutionary action after the January general strike are becoming the starting point of a feverish work of organization.

This organizing is an essential process for developing our collective forces and beginning to win real change--it both contributes to mass demonstrations actually becoming "mass," and it benefits from the spirit of the protests.

Consider the example that protest skeptic Zeynep Tufekci acknowledged did seem to achieve something: the 1963 March on Washington. Why did this march, though smaller than some other examples that could be pointed to in history, seem to lead quickly to the passage of the Civil Rights Act?

Because it was an organic part of a movement that was years in the making. The success of the civil rights struggles before it set the stage for the March on Washington to have the impact that it did. As journalist Anand Gopal put it at the "Anti-Inauguration" forum in Washington, D.C.:

A single protest, as important as they are, has never changed anything. But the social movements of linked protests--that is the lifeblood of resistance. That is the only thing, ultimately, that's ever changed everything. And by that, I mean civil disobedience, boycotts, sit-ins, prison solidarity networks, abortion funds, sanctuary spaces, all of it. Resistance isn't a moment. Resistance isn't a state of mind, but a tapestry which is collective and enduring. It's so enduring that the status quo cannot sleep at night.

SO ONE of the goals for socialists is to use the opportunities presented by mass protests to continue the work of building lasting networks of resistance.

But we have another goal in mind as well, which is to pose the question: What are we organizing for? In today's context, how do we organize to not only oppose the worst of Trump's attacks, but make progress in the struggle to win lasting change?

This, Luxemburg concluded, may be the most important role for socialists: "[I]t becomes obvious that the task of social democracy does not consist in the technical preparation and direction of mass strikes, but, first and foremost, in the political leadership of the whole movement."

Political leadership matters, because as we've seen throughout history, injustice and oppression sooner or later provoke resistance, but there is no guarantee that resistance in itself will lead to victory.

This comes straight from a foundational statement on political organization from the Communist Manifesto by Karl Marx and Frederick Engels:

The Communists fight for the attainment of the immediate aims, for the enforcement of the momentary interests of the working class; but in the movement of the present, they also represent and take care of the future of that movement.

This remains the task before us today. If you agree, check out a socialist meeting and help us get to work. The future of the movement depends on it.

Where did capitalism come from?