Why we’re opting out of PARCC

In a post at his I Am an Educator blog, Seattle teacher and activist Jesse Hagopian, editor of More Than a Score: The New Uprising Against Standardized Testing, reports on a new front in the battle against standardized testing--and introduces Maryland teacher and parent Michele Bollinger and her effort to raise awareness about the right to opt out of testing.

TAKEPART.COM RAN an article by Joseph Williams this week titled "Boycotters Might Be Winning the Battle Over Standardized Testing." In that article he writes: "In districts across the nation, from Florida to Alaska, the grassroots push for a rollback in high-stakes testing has gained momentum, and a broad coalition of parents, teachers, and advocates are poised to take advantage, even if it means an end to federal grants in tight fiscal times."

My good friend Michele Bollinger just sent me a copy of a statement to publish (see below) of her intention to respect her daughter's wishes not to take the new Common Core high-stakes test--and why other parents should join this opt-out movement. Michele is a teacher in Washington, D.C., and was my mentor to becoming a social justice educator when I first began my teaching career in that city. Michele is also the editor of the young adult textbook 101 Changemakers: Rebels and Radicals Who Changed U.S. History. 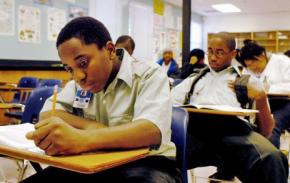 Here is Michele's statement, and her 10 reasons parents should join this growing opt-out movement:

As a parent and educator, I cannot stay silent as PARCC testing begins around the country. After much discussion within our family, our 5th grader has decided to decline the PARCC exam. We agree with her and have expressed our refusal to consent to testing to her school. Here are some of the reasons why.

It is easy to feel alone in this, but people are standing up to high-stakes testing all around the country right now. If any Maryland residents, especially those in Montgomery County, Maryland, are interested in declining the PARCC exam, please contact me at [email protected].

-- The PARCC is unlike any test you took as a child. It is unprecedented in its level of standardization and in the punitive measures attached to testing performance
-- The PARCC is a timed exam and unfamiliar to students in form and content
-- The stress of high-stakes test taking produces anxiety and is even more challenging for students who already experience anxiety
-- The testing environment can be oppressive, as students' movements and behavior are heavily monitored

For information and resources about standardized testing and how to opt out your child, visit UnitedOptOut.com, Maryland REFUSE Facebook page, DianeRavitch.net, FairTest.org, Brookings.edu, WashingtonPost.com, EdWeek.org, and AllianceForChildhood.com.

E-mail [email protected] for information about opting-out of the PARCC test in Maryland.

2. The PARCC test drives the standardization of learning.

-- The Common Core State Standards, which support the PARCC, have narrowed state curriculum to fit the demands of the test
-- Untested subjects are deprioritized or dropped altogether
-- This unprecedented level of standardization cannot accommodate student differences in need, ability and interests

4. The PARCC test is a fundamentally flawed assessment.

-- There is no evidence that PARCC prepares students for college or careers
-- PARCC is developmentally inappropriate for students at all grade levels
-- Not enough sample tests, practice tests or exemplars have been released
-- The expectation that many or most students will perform poorly on the test is public knowledge
-- Because Maryland students are already tested and assessed throughout the school year, the PARCC is unnecessary

5. Schools around the state of Maryland are unprepared to take a high stakes exam.

6. PARCC is a cash cow for testing companies such as Pearson, Inc.

-- Technology and testing companies--not educators--have funded and organized the rush to develop and implement the Common Core and PARCC
-- States have spent hundreds of millions of dollars on Common Core and PARCC
-- In Maryland, combined costs for Math & English/Language Arts tests are as high as $61.24 per student
-- Pearson is a private company which will have access to student data with very little oversight. Pearson may sell personal data related to individual children who have taken the PARCC

7. School districts have been bullied into accepting PARCC and the Common Core--and residents have been failed by their elected leaders who signed on to it.

-- When Chicago Public Schools announced they could not and would not administer PARCC this year, they were threatened with losing up to $1 billion in funding
-- Schools and school districts across the country have been forced to comply with federal and state mandates around PARCC or risk lose millions of dollars in funding
-- Maryland policy makers have endorsed Common Core and PARCC without diligently investigating what is at stake and without asking the right questions
-- We will call their bluff--we will not allow our children's schools to be held hostage to bad educational policy

8. PARCC test scores will be used to justify punitive measures.

-- Per "No Child Left Behind" and other school reform measures, test scores are used to fire teachers, hold students back and close down schools
-- These actions are disruptive and are unsettling to the communities that have to endure them
-- These measures disproportionately impact under-resourced communities and students of color

9. There is no legal way for school administrators to force your child to take a test she or he does not want to take.

-- The official position of the state Department of Education is that there is no "opt out" provision for testing in Maryland
-- There is no legal precedent for forcing a student to take a standardized test
-- Maryland students and parents can opt-out, refuse, or decline to take the test just as families can in other states
-- National "messaging" around the Common Core and PARCC has been carefully crafted to conceal problems and to appeal to parents and teachers
-- Schools present a favorable view of the PARCC and their ability to carry out testing because of a lack of political leadership from the state
-- All parents should be informed of the detriments of standardized testing
-- Your child cannot be punished, failed or held back for refusing this test

-- More people are questioning PARCC than ever before--teachers, students and parents around the country have begun to speak out against high-stakes testing
-- Boycotts and other actions against high stakes testing have galvanized communities to fight for justice in education
-- Given the large number of problems with the test, many schools will not be held accountable based on test results this year. This is a lower-stakes opportunity to boycott the test and to build momentum for bigger boycotts to stop the damaging "accountability" provisions in the years to come
-- If your child is "fine" taking tests and you can supplement your child's test-driven curriculum with enriching experiences outside of school, the same cannot be said for everyone
-- Even if your school tends to meet AYP or other defined goals, the same cannot be said for all schools--especially those in under-resourced areas and disproportionately those populated by students of color
-- We need to stand up for all children who are experiencing an unprecedented transformation of the learning experience via the expansion of high stakes testing.

First published at I Am an Educator.