Using dogs as a tool of racist repression

Alex Moyle looks at the history of the use of police dogs — and shows how law enforcement has used K9 units to inflict brutality and for propaganda purposes.

IN 2016, veterinarian Dan Wentz started a fundraiser to implant titanium crowns on the teeth of a 106-pound German Shepherd police dog.

“Given all that’s happened,” said Wentz, “I want to make sure we are doing what we can to help keep these dogs on the street.”

Ferguson, of course, is where the 2014 police murder of unarmed, 18-year-old Michael Brown touched off an uprising that sparked the growth of the Black Lives Matter movement around the nation, and brought horrific police repression of protesters in response. 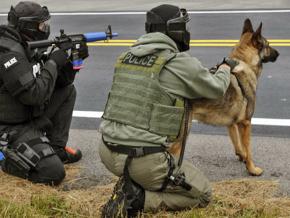 Wentz’s campaign was launched after the uprising. It came after the Ferguson Police Department had taken a police dog to the memorial left to Brown to piss on it. And it was after a Justice Department investigation into the Ferguson police found that officers only sicced dogs on Black people, including children, and that the dogs were used “not to counter a physical threat but to inflict punishment.”

This story isn’t an exception, though. Throughout the country, police departments cynically exploit people’s love of dogs to make the abuse of human beings by police K9 units and the abuse of the dogs themselves seem acceptable, obscuring a mass of brutality, corruption and abuse.

The “Rin Tin Tin” propaganda used by police departments for community outreach efforts must be confronted with the real history of decades of brutality — toward human and animal alike — as a result of the use of police dogs.

LIKE MANY aspects of modern policing, police dogs have their historical roots in slavery and colonialism.

Cuban bloodhounds were tools in the hands of professional slave catchers for recapturing and brutalizing fleeing slaves, and instruments of psychological terror to prevent others from trying to escape. From slavery to Jim Crow to the era of mass incarceration, attack dogs have been a continuous feature of anti-Black violence.

It’s still the case today that police dogs are used disproportionately to maul and terrorize people of color. The Ferguson police department’s apartheid policy of dog attacks for Black people only isn’t unique.

A 2013 report similarly found that 100 percent of the victims of police dog bites in Los Angeles County in the first six months of that year were Black or Latino.

The stark numbers show that no progress has been made in LA since former Police Chief Daryl Gates and the LAPD were sued by the ACLU and NAACP in 1991 for unleashing K9 units against the Black and Brown communities of Los Angeles, mauling more than 900 people over the course of three years.

Despite this history, it is even more difficult to convict police officers of wrongdoing or to win civil judgments in brutality cases where K9s are involved. Attorney Donald W. Cook has termed it the “Rin Tin Tin effect,” stating that jurors often seem unable to see police dogs as anything but noble, or to understand the severity of the maiming they can inflict, unless there is graphic video evidence.

“[Police] use terms like ‘apprehend’ and ‘restrain,’ to try to portray it as a very antiseptic event,” Cook told NPR. “But you look at the video and the dog is chewing away on his leg and mutilating him.”

ALTHOUGH RECENT history is rife with examples of needless mutilations, courts, like juries, have generally given police a wide berth to use dogs to inflict grisly injuries.

In 2017, the 4th U.S. Circuit Court of Appeals ruled for police in the case of Maney v. Garrison — a gruesome case where a police officer allowed a K9 to rip the scalp from the head of a defenseless homeless man. According to the decision, police had no obligation to immediately stop a K9 from mauling a person they knew wasn’t a suspect.

The courts have similarly looked the other way on police using K9s to violate legal protections against unreasonable searches.

In a rare moment of near-impossible naivety, the late Justice Antonin Scalia once asked why cops would want dogs that give false positives — indicating that drugs are present when they aren’t. Police answer that question themselves by referring to their K9 partners as “probable cause on a leash.”

Thus, in practice, cops can search anyone at any time so long as they have a K9 on hand.

IN ADDITION to the massive human and economic tolls, it should be pointed out that the public image of police as good keepers of their beloved K9 partners has no basis in reality. Police dogs frequently die when they are left in hot cars, struck by vehicles or killed in training exercises.

Along with the inherently abusive nature of training dogs to maul people, cops have frequently been caught committing animal abuse on the job against police K9s — including choking and beating them as one might expect the handlers of dogs trained for violence-on-command to do.

Showing how little they care about the welfare of their “partners,” in Illinois — where Macron County Sheriff Howard Buffett, the son of billionaire Warren Buffet, spends millions through his private organization to stock the state with K9 units — police recently threatened to euthanize their K9s if marijuana was legalized in the state.

Cops shouldn’t be allowed to pose as “friends to Fido,” given that they routinely shoot and kill family dogs, even in instances where the dog very clearly posed no threat.

According to Department of Justice estimates, cops kill more than 25 dogs each day in the U.S., adding up to some 10,000 animals per year. And since civilians’ dogs are considered chattel property, aggrieved owners often have little remedy outside of small claims court, where they can argue they’re entitled to the pitiful “market value” of their slain pet.

By contrast, harming a police dog — including protecting yourself from one that is attacking you — is a federal offense, punishable by up to 10 years in prison. Around the nation, numerous “Blue Lives Matter” bills are ratcheting up such penalties at the state level.

Along with their capacity for brutalization and the practical elimination of protections against unreasonable searches, police dogs are an invaluable propaganda tool, available for elementary school tours, public events and local morning news talk show demos. They are viewed by police chiefs as an incomparably “favorable asset for public relations,” and as mascots for their own program and department.

This remarkable sleight of hand — using animals that have been trained to be a key instrument of brutality to build a more favorable public perception — shows how this system manages to turn the very features that ought to be damning indictments into beacons for public support.

But this exploitation has been hugely successful. People’s love for dogs is based on 32,000 years of shared evolution that has produced remarkable animals many consider to be part of their family.

But in the hands of racist and brutal police departments, the physical abilities, intelligence and loyalty of dogs are put to the worst possible use.

DESPITE THIS brutal history, a popular movement against the use of police dogs doesn’t yet exist.

After the horrifying images of police dogs used against civil rights demonstrators in Birmingham, Alabama, and other cities in the 1960s, legislation was put forward to limit police dog use in California and Hawaii. But the proposals were crushed by pressure from law enforcement groups, and the use of police dogs has expanded ever since.

Even People for the Ethical Treatment of Animals — which has absurdly equated animal abuse with human slavery and opposed the use of service dogs for the blind — doesn’t take a principled stand against the use of police dogs. It instead urges departments to fit K9s with hot-car alert systems — and thank them for their “service.”

All around the world, from Ferguson to Standing Rock, from the U.S.-Mexico border to Palestine, from Guantánamo Bay to Abu Ghraib, attack dogs remain quintessential tools of racist violence. The use of police dogs is simultaneously human rights abuse, animal abuse and a propaganda tool in the furtherance of escalating repression.

Far from allowing police departments to exploit dogs as mascots that obscure police brutality, socialists, anti-racists and those opposed to animal cruelty should all strongly oppose the formation of K9 units, and demand that existing ones be disbanded as an important component of disarming militarized police forces.