How we can demoralize the right wing

"PEOPLE IN the U.S. were stunned that white supremacists with their hoods off were bold enough and willing to march through Charlottesville, Virginia," Haley Pessin tells me. "Trump's response to the events was that much more shocking because he initially refused to denounce white supremacy."

Hailing from New York, Pessin is one of a new generation of activists fighting for socialism in the United States. After Donald Trump's surprise election victory last November, she says, there was an initial consolidation of forces that recognized the need to oppose the new president and mobilize immediately against his agenda. For the first time in generations, socialist groups grew rapidly.

"After the initial upsurge, there was a bit of a lull because Trump has just kept coming down with attack after attack," Pessin says. "Trump doubled down on the attacks on immigrants, Muslims and transgender people despite his policies being wildly unpopular and the fact that he is personally unpopular on an unprecedented level for a new president. 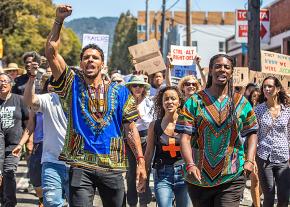 "At the same time, if you look at Trump's rallies, you can see that he has always used racist scapegoating as a way to deflect from his pro-big business agenda or to distract from his obvious legislative failures. That is why he has clung to and encouraged the racist elements of his base even after Charlottesville--because this has been a strategy that has worked in the past."

The Trump administration is doing enormous damage, despite the chaos in the White House and the failures in Congress. There are an increasing number of arrests of undocumented migrants and the targeting of activists who support undocumented people. Trump and his allies in government have pushed hard with law and order--a direct rebuke to all the people who have been marching against police brutality.

"What is different now is that Trump is making open racism legitimate in mainstream politics," Pessin says. "Of course, this is also provoking opposition. Prior to Charlottesville, most of the establishment criticism of Trump was about his links to Russia or about him acting 'unpresidential'--whatever that means.

"We now have an opportunity to organize against him on ground that really matters, while also remembering who paved the way for the attacks in the first place. The establishment would like us to see Trump as an aberration, but he's a product of what they've been doing for decades.

"The fact that the far right has been given encouragement from the highest office in the land has made them feel like they actually have a basis to keep organizing in the open and to 'come out offline' as they put it--to consolidate their strength and to intimidate and terrorize communities that are already under attack."

PESSIN DESCRIBES how, on the left and among progressives, "there was a broader debate in the lead-up to Charlottesville about how to confront the far right," but that the events since then have been decisive. "The people on the ground in Charlottesville were really clear that there should have been more people out on the streets, that everyone who is opposed to these vile racists should mobilize and show their strength in the greatest numbers and demoralize them. That is the only way to confront them."

"Charlottesville also showed that far-right forces are intent on stoking violence. Our side needs to talk about the question of self-defense. When we just focus on physical confrontations, it makes it look like the opposition to racism is much smaller than it actually is. After Charlottesville, there was a massive mobilization of thousands of people in Boston, Massachusetts, which included trade unions and other groups.

"This really demoralized the far right and gives us a model for what we should do to confront them everywhere. The focus now has to be on building that bigger united active movement."

The catalyst for events in Charlottesville was the proposed removal of a Confederate statue. The debate about whether to remove these statues has now become part of mainstream political discussion. "I think it's extremely exciting and heartening that so many people are finding ways to plug into the struggle against racism," Pessin says. "In many cases, it's the first time that we're having a conversation about the statues and the racist history of the U.S. People can make the connection between that legacy and how racism operates today."

Pessin says that the success of the massive rally in Boston needs to be repeated. "If we want to get rid of Trump, we will need to continue to rely on mass mobilizations to create further divisions in the establishment because it's clearly galvanizing people to fight back. The Democrats are not willing to wage a consistent battle against Trump. The only way to confront the broader growth of the right is to get organized on a left-wing basis.

"Instead of being passive bystanders in Boston, people were actively involved in the organizing process. It shows us what's possible and what is most effective. Now is not the time to back down and go home, not in the U.S. and not in Australia either."