Saying yes to another world

Activist and educator Brian Jones reviews the New York Times bestseller from Shock Doctrine author Naomi Klein with an eye to what it says about building resistance.

ABOUT 20 pages into No Is Not Enough: Resisting Trump's Shock Politics and Winning the World We Need, I found myself making mental lists of people for whom I would purchase extra copies. The list got too long so I decided it would be better (and more economical) to recommend it to everyone by writing this review.

No Is Not Enough is an essential and highly readable guide to the crisis we're in and the opportunities it presents for profound, positive social change. Naomi Klein has a real gift for summing up economic and political trends. As she did in her previous books, Klein presents--in compelling, accessible, page-turning prose--useful ways to step back and recognize the broader patterns at work in the world.

The need for greater perspective couldn't be more urgent. While mainstream media outlets breathlessly stoked hopes in a series of investigations into Trump's countless misdeeds--Russia! Twitter! Obstruction! Russia!--Klein's book probes deeper, warning that merely deposing the Orange One and leaving in place the conditions that produced him would be a disaster. 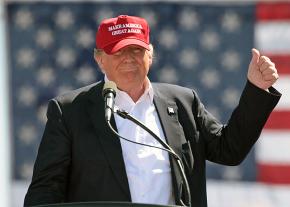 "This book's argument, in a nutshell," she writes, "is that Trump, extreme as he is, is less an aberration than a logical conclusion--a pastiche of pretty much all the worst trends of the past half century."

Klein draws on the research she has done on those "worst trends" to explain this new manifestation. Her writing on advertising and branding (in her book No Logo), on the ways that governments use crisis to push through rapid pro-business policies (The Shock Doctrine), and on the climate emergency facing human life on planet earth (This Changes Everything) are all brought to bear on the situation we find ourselves in.

Klein describes how Trump followed cutting-edge trends in advertising, turning his fairly traditional real estate business into a "mega-brand," then using a "reality" TV show The Apprentice to promote across the globe the idea that Trump was wealthy not because of his inheritance, but because he was such a savvy, brilliant "boss."

Deciding to run for office, Trump brought the melodrama and trash-talk methods he learned in the world of professional wrestling and modeled his presidential campaign as the ultimate reality TV show. "What's extraordinary about Trump's presidency," Klein writes, "is that now we are all inside the Trump branded world, whether we want to be or not."

Underlying all sections of the book is the overriding concern that time is literally running out for human life on planet earth--a problem that Trump threatens to accelerate.

Klein is not hopeful that any political or economic elites will reach for genuine solutions to the climate crisis. Essentially, she argues that the rush to drill or not drill is dependent on the price of oil. When it's low, drilling into deep and difficult-to-reach reserves stops being worth the cost, but when it's high, oil giants like ExxonMobil allow nothing to stand in their way.

The great danger, she writes, "is that Trump and Co. may well have more tricks up their sleeves to try to push up oil prices and realize their goal of setting off a fossil fuel frenzy."

IT'S A bleak picture, and in the interest of "shock preparedness," Klein pulls no punches painting it.

But she also observes rays of hope: including a new global hunger for forthright left-wing electoral challenges to mainstream politicians and parties. "What for decades was unsayable," she writes, "is now being said out loud by candidates who win millions of votes."

The popularity of left candidates, she argues, shows that voters who are angry with the status quo can be won away from the racist right. "The crucial lesson of Brexit and Trump's victory," Klein argues, "is that leaders who are seen as representing the failed neoliberal status quo are no match for the demagogues and neo-fascists."

But there are examples of a left alternative doing well, ranging from the Bernie Sanders within the Democratic Party to the radical left alternative offered by European parties and formations such as SYRIZA and Podemos. Rather than middle-of-the-roadism, we need to dream big, Klein writes:

Only a bold and genuinely redistributive progressive agenda can offer real answers to inequality and the crises of democracy, while directing popular rage where it belongs: at those who have benefited so extravagantly from the auctioning off of public wealth; the polluting of land, air, and water; and the deregulation of the financial sphere.

Klein makes a number of useful points in this section of the book, including the fact that Trump's victory isn't just a product of Hillary Clinton's shortcomings--Klein calls Clinton's philosophy "trickle-down identity politics"--nor purely the success of ignorant, racist ideas from the right-wing fringe.

Rather, Klein writes, Trump is a particularly odious product of narratives that have been popular in the mainstream--including among liberals:

For two decades now, elite liberals have been looking to the billionaire class to solve the problems we used to address with collective action and a strong public sector...Billionaire CEOs and celebrities--Bill Gates, Richard Branson, Michael Bloomberg, Mark Zuckerberg, Oprah, and always, for some reason, Bono--are treated less like normal people who are gifted in their fields and happen to be good at making a great deal of money, and more like demigods.

The precedent of "mountaintop do-gooderism" is, Klein argues, "part of the reason it became fathomable for Trump to run in the first place."

Klein is attentive to the deep connections between racism and capitalism in American history--adopting the phrase "racial capitalism"--while at the same time challenging readers to dispense with acrimonious debates about race, class and gender.

She argues against viewing Trump's rise as the product of just one or two "factors," and instead encourages us all to "become just a little bit curious about how all of these elements--race, gender, class, economics, history, culture--have intersected with one another to produce the current crisis."

Instead of trying to "rank" our oppressions or "vanquish all the others in some sort of oppression cage match," Klein argues for striving to understand "in our bones" how different forms of oppression "intersect and prop each other up, creating the complex scaffolding that allowed a kleptocratic thug to grab the world's most powerful job as if it were a hostess at a strip club."

AS THE title suggests, Klein argues that merely saying "no" to the president and his policies is insufficient. Ultimately, the left has to have a positive vision.

She calls for a return to the kind of utopian political imagination that inspired so many large and successful social movements from Radical Reconstruction to the explosive movements of the 1960s and '70s.

While she has no problem dropping the term "capitalism" throughout, here, Klein generally avoids the "s-word." She nods to the Paris Commune, Karl Marx, W.E.B. DuBois, Upton Sinclair and Bernie Sanders--and I suppose the reader can imagine what those figures have in common.

While Klein supported Sanders in the Democratic primary, she acknowledges critiques of him from the left by Ta-Nehisi Coates and Michelle Alexander--and from the right by neoliberal Democratic Party leaders and liberal figures whose contempt for Sanders is, she writes, "revealing."

Klein does not, however, offer an opinion on the strategic question looming over the left in this country: Whether or not the Democratic Party--controlled from the top by the very neoliberal actors she opposes--can be "captured" for our side.

Ultimately, she emphasizes new rays of left-wing dreaming coming from the grassroots—from social movements that have captured popular imagination and put forward new ideals for reorganizing society, such as what she witnessed in the resistance camp of the Standing Rock Sioux fighting the construction of an oil pipeline across their lands, and in the Vision for Black Lives document, produced by a collaboration of over 50 Black-led organizations, calling for fundamental economic restructuring and redistribution.

This focus on bottom-up change is not only convincing, but refreshing at a time when so much about "politics," even on the left, is viewed through the lens of electoral strategy in one form or another. But the question still remains of these new formations' relationship to the Democrats. It shouldn't be left unanswered.

In the final section of the book, Klein presents the "Leap Manifesto" ("A Call for a Canada Based on Caring for the Earth and One Another"), which she helped to write through a collaborative process with a diverse group of Canadian activists, unionists, indigenous people, faith leaders and more. Klein hopes both the process and its product can be a model for people striving to build popular unity around left-wing politics.

Importantly, she notes that through some challenging discussions, the "Leap" assembly learned not to fear words like "redistribution" and "reparations," but to embrace them.

In a moment when "America's first nuclear-armed reality TV president" has empowered millionaires and billionaires to escalate their war on working people and the poor, on immigrants, on women and people of color, and on the planet, and when police and white supremacists feel emboldened to kill, more and more people are realizing the need to mobilize a broad coalition to defeat the right.

With one voice, we must say "No" to the politics of racist scapegoating, privatization and endless war. Klein's book is a helpful way to start the conversation about the kind of vision to which we, together in equally huge numbers, can collectively say: YES.