The whole rotten barrel has to go

David Bliven reviews a book that makes the case that attempts to reform the police won't solve the underlying problem--the institution itself.

EVER SINCE I read Michelle Alexander's The New Jim Crow, I've been clamoring for a book that continues its narrative, striking at the heart of the criminal system of injustice. While many books have rightly documented the budding Black Lives Matter movement, as well as the epidemic of police killings, I hadn't read one--until now--that squarely takes on the notion of whether activists should call for police abolition.

Vitale brilliantly divides each chapter into three parts: laying out the scope of the problem, examining liberal efforts at reform (and why they aren't working) and then putting forth the radical change needed to address the problem. When I read through the chapters, I couldn't help but be struck by the way intersectionality relates starkly to the issue of policing in our communities. 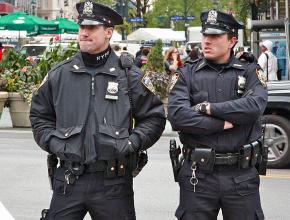 Vitale takes on the notion that "better training" of police or "body cams"--demands that some activists have understandably hoped would reform some of the worst outrages of the police--and argues why they won't solve the problem.

Citing research that found that that targeted and intensive training of police had little or no impact on racial disparities in traffic stops or marijuana arrests, he rightly argues that this is because such training ignores the "institutional pressures [which] remain intact."

The End of Policing also cites studies showing that the use of body cameras has very little impact on reducing police brutality. Indeed, Vitale discusses one study that shows that body cams actually increased the rate of police shootings.

While it's dubious that the use of cameras causes police to shoot people at higher rates, one can safely conclude that many police aren't deterred from wrongful conduct simply because they think they're doing what their institution wants them to do. As Vitale argues, "Ultimately, body cameras are only as effective as the accountability mechanisms in place."

VITALE ALSO takes on the notion that what we really need is more Black and Latino police, arguing that "even the most diverse forces [still] have major problems with racial profiling and bias, and individual Black and Latino officers appear to perform much like their white counterparts."

Many people think of the police as a mostly white institution, and while that may be more true of their top administrators and supervisors, Vitale points out, "The U.S. population is 72 percent white; 75 percent of police nationally are white." He goes on to show how the policing institution is nearly as Black as the population--12 percent versus 13 percent overall.

Some argue that what we need in a color-blind policing, as if the police can somehow check societal biases at the door. But as Vitale argues, if the institution floods police into poor and working-class communities, then even racially neutral enforcement will result in arrests of people unable to afford fines or good attorneys.

Taking on the call for "community policing," Vitale argues there is very little research showing that it actually works to either reduce crime or rein in over-policing. Moreover, the book finds there's no link between the number of police and crime rates. The End of Policing argues that ultimately police should be disarmed and brought under civilian and community control.

In the chapter on the school-to-prison pipeline, Vitale provides research showing that students and staff schools with more police report feeling less safe than schools with no police. Indeed, rather than decreasing crime, it appears police presence in schools increase the crime rate. What is needed, he argues, is to transform schools into safe and supportive environments, while teaching students anger management, mediation and coping skills.

The chapter on the police and the mentally ill is particularly instructive, as an estimated one in every four fatal police killings involve a person who suffers from mental illness. When a person suffers from a mental illness, what they need is help--from doctors, nurses and mental health professionals--not police.

In his chapter and policing and homelessness, Vitale argues that what people without a house to live in need are houses.

A University of Southern California study cited in the book shows that the total cost to society is approximately $187,288 per homeless person--once one adds up all the costs of police harassment, the criminal justice system and related "services." However, when people are simply given permanent housing with supportive services, the cost was cut to $107,032--and more importantly, their interaction with the police came to an end.

IN HIS chapter on the war on drugs, he argues that the U.S. currently spends around $50 billion a year to fight the losing war--a number sure to increase in Trump commits resources to combat the opioid epidemic.

Vitale argues for legalization of all drugs, including heroin and cocaine, stating that that these drugs were actually legal in the U.S. into the 1920s and heroin in Great Britain into the 1960's. He ends the chapter by arguing, "Many people involved [with drugs] don't really have a drug problem; they have a job problem."

What we need to do is cure the "health" problems of not having good jobs at living wages, and that will go a long way toward remedying many ills. This book cites a study that found that New York spent more than $1 million to incarcerate people from a single square block in Brooklyn. A better use of the million dollars would be "jobs programs, drug treatment, mental health services and youth services," writes Vitale.

No book on policing would be complete without a chapter on the institution's impact on immigrants. In 1992, there were roughly 4,000 Border Patrol agents. As of the publication of this book, there were 20,000, with Trump announcing plans in 2017 to add roughly 15,000 more agents.

All told, that means there has been an approximately 900 percent increase in the Border Patrol since Bill Clinton was elected president.

Vitale argues that more police have pushed immigrants around--and done nothing to stop the flow. Building Trump's dream of a giant wall will do nothing, since coyotes and their wealthy backers will simply find other ways--trucks, boats, planes and tunnels--to cross the border. Ultimately, as Vitale argues, the solution is amnesty.

A mild criticism of the book is that Vitale could have written a chapter on how we, as activists, bridge the gap between the radical reforms called for and the place we're at now. This harkens to Michelle Alexander's The New Jim Crow, where she calls for nothing less than a new human right movement to draw the necessary connections between mass incarceration and jobs, housing schools and health care.

Perhaps the missing chapter in Vitale's book is on purpose--because it's a chapter we, as activists, need to write ourselves. In sum, I have always thought of myself as a prison abolitionist, but never had the book to corroborate my feeling that I should be a police abolitionist as well. This book is it.