The resistance will not be branded

On January 19, 2015, Seattle teacher and anti-racist activist Jesse Hagopian addressed a rally that preceded the city's Martin Luther King Day march. Afterward, as he walked past a line of police who were blocking a street, officer Sandra Delafuente doused him with pepper spray at point-blank range--and then continued to spray several other people.

Video of the unprovoked attack was shared widely--and last week, an image from it went viral as part of a meme responding to the appalling campaign by Pepsi that tries to profit off the Black Lives Matter movement. In an article published at his I Am an Educator blog, Hagopian explains the story behind the image.

ON APRIL 5, I woke up to find out I was a meme gone viral.

The hilarious meme by @ignant_ was in reference to the shameful ad that Pepsi produced--and quickly took down--depicting model Kendall Jenner diffusing tensions between protesters and cops by handing one officer a refreshing can of Pepsi. When the officer cracks open the can, the protesters are overjoyed and the officer gives an approving grin. Peace on earth prevails because of commercialism and sugar water.

Hundreds of thousands of people have liked and shared the hilarious meme that mocks the ignorance of the Pepsi ad. The meme was made from an image taken of me at the 2015 Martin Luther King Day rally in Seattle.

But here's what folks who shared the meme might not know about that photo: The image is a still taken from a video that shows me on the phone, walking on the sidewalk, when Seattle police officer Sandra Delafuente, totally unprovoked, opens up a can of pepper spray in my face. If only Kendall had been there with a cold can of Pepsi! 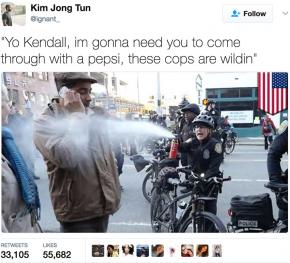 Many people asked if the photo was real or photo shopped. It's real. Too real. I wasn't on the phone with Kendall, but I was on the phone with my mom giving her directions to come pick me up because it was my 2-year-old son's birthday party later that day. That's when a searing pain shot through my ear, nostrils and eyes, and spread across my face.

My mom soon arrived and took me back to the house. I tried to be calm when I entered so as not to scare my children, but the sight of me with a rag over my swollen eyes upset the party. I spent much of the occasion at the bathtub, with my sister pouring milk on my eyes, ears, nose and face to quell the burning.

In the aftermath, I filed a federal lawsuit against the City of Seattle and the Seattle Police Department--which is under a federal consent decree by the Department of Justice because of its demonstrated excessive use of force--and I helped organize rallies and press conferences with other victims of police brutality. This pressure helped Seattle's Office of Professional Accountability rule in my favor and recommend a one-day suspension without pay for officer Delafuente. Not much of a reprimand, but at least it was an acknowledgment of wrongdoing. However, Seattle's chief of police, Kathleen O'Toole, directly intervened to erase that punishment. Maybe I should have tried handing her a can of Pepsi before I asked for justice?

AFTER MORE than a year of stressful litigation, I reached a $100,000 settlement. This was in no way justice. Justice would have been making the officer who assaulted me account for her crime. But I was determined to make sure some good came out of the pain and I decided to use settlement money to start the Black Education Matters Student Activist Award to honor Seattle youth who pursue social justice and organize against institutional racism. Nominations for this year's award are currently open.

I gave the first three awards out last year to some incredible young activists:

-- Ifrah Abshif, whose work founding the Transportation Justice Movement for Orca Cards secured travel funding for all low-income Seattle Public School students who live more than a mile from their schools;

Marci Owens has been a health care and Black Lives Matter activist and is a transgender student who has become a strong advocate for the LGBTQ community.

We need to support young change-makers like these because commercialism won't save us. Corporations like Pepsi will always be in the business of trying to brand rebellion and profit from protest. But while they shamefully try to get their conglomerates "in the black" off of the image of the Black Lives Matter movement, we will be building that movement and fighting for a world where the wealth is used for the common good.

But for now, I'm just glad that one of the most painful moments of my life has been turned into stinging satire that makes me laugh out loud.

First published at I Am an Educator.