Saying no to Arpaio’s America

PHOENIX--As many as 15,000 immigrants and activists marched four miles through the city on January 16 to protest the ongoing racist law enforcement practices of America's most notorious anti-immigrant sheriff.

Though he is currently under federal investigation for civil right abuses, Maricopa County Sheriff Joe Arpaio has continued to terrorize immigrants and communities of color with his draconian policies.

But last weekend's demonstration--which dwarfed the size of other recent protests against Arpaio--drew faith, labor and community organizations together to declare that "Arpaio's America is not our America." The march was organized by a number of immigrant rights organizations, led by the Puente Movement and the National Day Laborers Organizing Network (NDLON).

Thousands assembled in Falcon Park before marching to Arpaio's famous "tent city" jail, holding signs that read "We are human" and chanting "Joe must go!" Last year, Arpaio made national headlines when he marched more than 200 undocumented prisoners, shackled and wearing striped prison suits, before television cameras to an outdoor prison surrounded by high-voltage electrified fences. 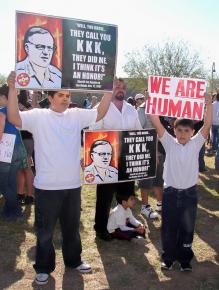 Arpaio is infamous for his bigoted policing against documented and undocumented immigrants in Arizona, where he has used his authority under the federal government's 287(g) program--which allows local officials to enforce federal immigration laws--to harass, detain, humiliate and divide immigrant families. Racial profiling in neighborhood sweeps and raids that target Latino and other communities of color have continued under Arpaio.

Sandra Castro, a local organizer with the Puente Movement in Phoenix, said the aim of the march was to bring Arpaio's injustices to the attention of Barack Obama and Homeland Security Secretary Janet Napolitano. "We are calling for the termination of the 287(g) program and an end to the collaboration between Arpaio and ICE [Immigration and Customs Enforcement]," she said.

OVER THE past year, organizing by activists in Arizona and across the country pressured the Department of Justice to open a federal investigation of the civil rights crisis that Arpaio has created in the state. Additionally, congressional hearings were convened, and the Department of Homeland Security stripped Arpaio of his power to arrest undocumented immigrants.

But despite having his 287(g) powers weakened, Arpaio continues to legally target the immigrant community under a revised federal agreement that allows jail officials to enforce immigration laws. Activists report that local police continue to arrest undocumented immigrants in the streets, in violation of the law. This systematic racial profiling has more generally terrorized communities of color, documented or not.

"The conditions in the tent city are still harsh," said Castro. "There is still segregation between documented and undocumented prisoners and chain gangs are used."

As the Puente Movement put it in a call-to-action statement on its Web site in the run-up the march, "Unfortunately, fear and injustice remain prevalent in Maricopa County. Not much has changed as Joe Arpaio and his sheriff's deputies continue to terrorize the streets of Maricopa County and continue their physical abuse in the jail with the 287(g) agreement."

The marchers last weekend wanted to highlight these ongoing civil rights abuses and demand an end to the 287(g) program and other efforts like the so-called "Secure Communities" initiative, which lead to the kind of racial profiling and civil rights abuses that Arpaio has come to epitomize. Activists also called for an end to the raids and separation of families, and demanded that Washington enact comprehensive immigration reform that would provide legalization for the undocumented.

Sarahi Uribe, an organizer with NDLON, emphasized the demonstration's purpose in sending a message to Washington. "We want to tell [Napolitano] to stop the deportations and abuses of civil rights," she told The Arizona Republic. "We're very inspired by the civil rights struggle in this country, and we see this as a continued fight."

Much of the media coverage of the march was dominated by violence that erupted between police and a small group of protesters, resulting in five arrests.

While organizers said that the small group of black-clad anarchists who sparred with police, allegedly throwing rocks and bottles, didn't represent the agenda of the march, others claim the police violence was unprovoked. Police used horses and pepper spray that reportedly affected several small children and families downwind from the incident.

Overall, though, the atmosphere of the march was peaceful and powerful, according to Castro. Speakers included Dolores Huerta, cofounder of the United Farm Workers, as well as singers Linda Ronstadt and Zach de la Rocha.

"People have seen that Obama hasn't really done anything on immigration reform and the injustice in Arizona is still happening," said Castro, explaining the high turnout at the march in spite of diminished national media attention on Arpaio's abuses.

Castro also referred to the anger locally at the passage of HB 2008 late last year, a new state law that requires public employees to report any undocumented immigrants who request public benefits. This law is adding to the anti-immigrant climate in Arizona that Arpaio has spearheaded.

"But as Arpaio continues his attacks, we've seen constant national solidarity with the immigrant community here," said Castro, adding that local groups like the Puente Movement will continue to protest against Arpaio, as it has for the past year and a half.

Arizona has become a testing ground for anti-immigrant laws, which reactionary policymakers seek to impose on a national scale. It will take a revived national immigrant rights movement to resist such bigoted policies that terrorize immigrants in Arizona and in other parts of the country--a movement that stands with the immigrant community in Arizona and accepts nothing less than full legalization.