In his column for Inside Higher Ed, Scott McLemee reviews a book that examines four cases in which the right wing has clung to irrefutable falsehoods, science be damned.

NO ESTIMATE of overall turnout for the April 22 global March for Science is available, but it surely qualifies as a milestone event in President Trump's first 100 days. A table showing attendance at a few dozen protests (out of the estimated 500 to 600 that took place around the planet) suggests the total to have been in the hundreds of thousands.

In Washington, at least, the demonstration had an urgent point of local emphasis: The severely slashed budgets that the administration has proposed for the National Institutes for Health and the Environmental Protection Agency. With the EPA, the cuts amount to disemboweling the agency; the limbs can be sawed off later, presumably at leisure. But the line of defense was wider than that, as expressed by one of the march's honorary co-chairs, known to a generation or two of public television viewers as Bill Nye the Science Guy. Speaking to The Washington Post, he said, "Somewhere along the way, there has developed this idea that if you believe something hard enough, it's as true as things discovered through the process of science. And I will say that's objectively wrong." 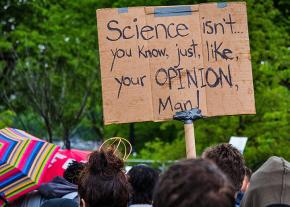 Upon reading this, I noticed three responses click through my brain in rapid succession. First came full and immediate assent: "Yes, of course." The next was in the nature of a sigh, its verbal equivalent being something like: "How messed up are things that someone not only feels the need to say this out loud, but is compelled to do so as publicly as possible?"

And finally, what's hardest to put into words: a kind of forceful reminder of the reality that politically weaponized ignorance is effective, well funded and (to go by every available indication) here to stay. This is unacceptable. More than that, it is extremely dangerous; resignation is not an option. But people who find comfort living in a cosmos of "alternative facts" aren't going to leave it willingly. They tend to stand their ground.

LEAST OF all are they going to be driven out by Antony Alumkal's Paranoid Science: The Christian Right's War on Reality, just published by NYU Press. The very title of the sermon ensures that nobody will attend but the choir--and few besides the most fervent members, at that. That is unfortunate: The element of pamphleteering in the book proves less significant than its four case studies of bad ideas going out in search of rationales to entrench them.

Neither believers nor conservatives have a patent on that process, but Alumkal--an associate professor of sociology of religion at the Iliff School of Theology in Denver--is especially irked that evangelical Christianity and the right have become so tightly bound to one another. He reviews four seemingly unrelated developments: intelligent design (creationism rebranded); the milieu of so-called ex-gay ministries and therapies; Christian right bioethics (exemplified in opposition to stem-cell research); and those for whom the very idea of anthropogenic climate change shows a troubling lack of confidence in the divine plan.

Alumkal treats each as a movement trying to maneuver between an expressly theological opposition to some aspect of science, on the one hand, and an effort to show that "real science" happens to coincide with religious beliefs, on the other. Opposition to the theory of evolution through natural selection is an obvious example with a particularly interesting history. The effort to find an alternative has taken a couple of seemingly distinct forms, with the earlier version, "creation science," proving effectively indistinguishable from a literal reading of the Book of Genesis.

The intelligent-design movement is more circumspect. It treats evolutionary theory as a kind of secular mythology (part of a religion it calls "naturalism") which is not based on evidence and is in no way preferable to thinking that life is the product of an intentional act of creation. Hence the role of a supreme being with a long-term plan is as scientific as any other theory.

This possesses at least the form of a rational argument, with nothing to imply a diorama showing Adam and Eve with a brontosaurus, though also nothing to rule it out, either. But the history of intelligent design over the past 30 or 40 years is one of persistent tension between its nondoctrinal framing (i.e., no credal statements about the designer) and the reality that specific religious concerns animate it.

Quoting numerous passages from the literature of intelligent design and the other movements he analyzes as well, Alumkal shows that hostility toward science--including a kind of fearful contempt toward scientists--is fairly palpable. "Militantly secular professors, intoxicated by the naturalistic doctrine of Darwinism," are depicted as "bent on strengthening their dominance of American culture." Not content with making godless secularism pretty much a condition of employment at the universities, the naturalistic elite also influence the mass media and even seek to make a religion out of concern for the environment: "It even has a special vocabulary, with words like 'sustainability' and 'carbon neutral.' Its communion is organic food. Its sacraments are sex, abortion and, when all else fails, sterilization. Its saints are Al Gore" and the Intergovernmental Panel on Climate Change.

Does this seem like laying the caricature on a bit thick? I would agree, except for the fact that Alumkal is actually quoting from an anti-environmentalist tract. (Nor is it even the most unhinged passage he found there.) "When it comes to science," he writes, "perhaps the key issue is the ease with which these individuals deny reality when they find it undesirable." True, but it remains difficult to conceive why they'd choose to live in such an abject fantasy world instead.

First published at Inside Higher Ed.