To realize the potential of the struggles to come over women's right to choose, we need an honest assessment of whether past strategies worked, writes Elizabeth Schulte.

THE FACT that a hateful sexist made it into the White House has emboldened conservatives to escalate their attack on women's right to abortion--and that's forcing supporters of women's rights and reproductive justice to strategize about what it will take to push back the attack.

In Washington, congressional Republicans are rushing to defund Planned Parenthood. State by state, GOP legislators are preparing more restrictions on reproductive rights. And in the street, anti-abortion forces have taken their crusade back to women's clinics with a day of action against Planned Parenthood in early February.

But as recent events have shown, the right-wingers aren't the only ones with a reason to feel emboldened. In cities across the country, at least 3 million people who oppose Trump took the streets on Inauguration Weekend for Women's Marches that put our rights, and particularly reproductive justice, in the spotlight.

The calls for these marches--hastily initiated not by the large, well-funded women's groups usually associated with marches in Washington, but by individuals angry at Trump's election who took to the Internet--caught fire and inspired others to get themselves to a protest. 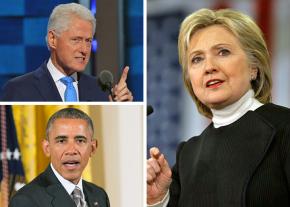 As the organizing continued ahead of January 21, the demands of the Women's Marches began to reflect the solidarity that will be key if we're going to beat back Trump's multi-pronged offensive--by embracing issues that affect all women, particularly women of color.

In a lot of ways, that weekend of protest opened up a conversation about what is needed to beat back the Trump attack and put into question old assumptions about how to fight for women's rights.

For the Democratic Party and for organizations like the National Organization for Women that devote their resources to electing Democratic candidates, the laser focus for more than a year was electing Hillary Clinton because of what it would mean for the U.S. to finally have its first woman president.

Yet after the election of Trump, who represents sexism incarnate, the Democratic Party and the women's organizations that support it weren't the ones leading the call to hit the streets. That was up to the rest of us.

In the days after losing the election (though she won the popular vote), Hillary Clinton took the lead not in protest, but in conciliation with the Trump regime. "I still believe in America, and I always will," Clinton told supporters. "And if you do, we must accept this result. We owe him an open mind and the chance to lead."

Large numbers of people disagreed, however, and showed Trump what he actually deserved--a very loud and very angry protest.

TODAY, ABORTION rights supporters have an opportunity to talk about what the Democrats' strategy has meant for our side--and begin to see that our real power comes from opposing the right wing and unapologetically defending our rights.

Because while the Democratic Party is supposed to be on the side of abortion rights, over the decades, its policies have helped weaken that side by undermining any confident stand for women's right to choose, and instead seeking middle ground with the right.

If our side is in a weaker position today and must rebuild a fighting movement for reproductive rights, the compromises that the Democrats have accepted over the years bear a big part of the responsibility.

So, for example, when Planned Parenthood comes under attack from the Republicans because they provide abortions, the organization defends itself by minimizing its abortion services.

And when pro-choice activists are eager to counter anti-abortion bigots protesting at Planned Parenthood in a February day of action, the political wing of the women's health care provider tells supporters to stay away and make a donation instead.

Thankfully, in a number of cities, activists protested anyway, in a powerful show of resistance against the Religious Right and in support of Planned Parenthood.

For women making the choice to end an unwanted pregnancy, the decision is about her body, her future and her right to decide. But for most politicians, Republican and Democrat alike, it's about a cold political calculation.

THERE ARE few topics used often to coerce support for Democratic candidates during election time than the threat of what Republicans in power will mean for reproductive rights. But Democratic Party rule hasn't always measured up to the campaign promises.

One example is the Hyde Amendment, originally passed in Congress in 1976, just three years after the U.S. Supreme Court decision in Roe v. Wade legalized abortion.

Supported by Democrat Jimmy Carter, Hyde bars the use of federal Medicaid funds for abortion. It's a legislative provision attached to an annual spending bill, so Congress must vote on it every year. Every year for the last 40 years, the Hyde Amendment passes. And every year, poor women pay a terrible price.

Among low-income women ages 15 to 44 who are enrolled in Medicaid, 60 percent live in the 35 states that don't cover abortion, except in limited circumstances--that's about 7 million women of reproductive age, including 3.4 million who are living below the federal poverty level, according to the Guttmacher Institute.

The amendment's author, Rep. Henry Hyde knew that it would be easiest to target poor women, commenting in 1977, "I certainly would like to prevent, if I could legally, anybody having an abortion, a rich woman, a middle-class woman or a poor woman. Unfortunately, the only vehicle available is the...Medicaid bill."

In 1992, Bill Clinton campaigned on the promise that he would reverse the Hyde Amendment, but he continued to sign on to it every year he was in office--although a slightly modified version that allowed for exceptions in cases of rape, incest or when the woman's life is in danger--which account for very few abortions.

Barack Obama did Clinton one better during his administration, using a ban on Medicaid funding for abortion to entice anti-choice Democrats into supporting the Affordable Care Act. He signed an executive order in 2010 stating that the ACA would maintain the current restrictions in place under Hyde.

No matter what Obama's personal feelings about abortion were or how passionately he spoke about it, he used it as a political bargaining chip, plain and simple.

And while abortion might be an issue in every election, what happens when the candidates take office might be quite different to what they said on the campaign trail.

A lot of us stood on the Washington mall at a completely different women's march in 2004, when then-New York Sen. Hillary Clinton--standing beside that renowned "feminist," former Secretary of State Madeleine Albright--bragged that the last time they marched was in 1992, before her husband took office.

"We didn't have to march for 12 long years," Clinton said, "because we had a government that respected the rights of women."

It is true that the women's organizations with the resources to call a demonstration never did--until 2004, when they were trying to get pro-war Democrat John Kerry elected president against George W. Bush. Along the way, these groups also adopted the language that the Clinton Democrats used to talk about choice: "Abortion should be safe, legal and rare."

The fact is, though, that somebody should have been protesting. During Clinton's eight years in office, abortion restrictions were passed in state after state, more than during the presidencies of Ronald Reagan and George Bush Sr. combined.

Someone should have been protesting--and pushing back against the Clinton mantra of trying to find "middle ground" with the anti-choice right.

ABORTION ISN'T an issue of morality, as politicians like the Clintons portray it. It's about a fundamental right for women to control their bodies.

With this understanding, you can't possibly seek to find "middle ground" with the people who want to take your rights away.

We should accept nothing less then full support of a woman's right to choose.

When the Democratic Party and mainstream women's organizations threw their weight behind Hillary Clinton, who so thoroughly works in the interest of the status quo, they said something very important about what they think about protecting our rights.

Now that Trump is in office, the question is more pressing: Can supporters of women's rights afford to accept more of the status quo? Or do we need to start rebuilding a movement that is uncompromising about reproductive justice for all women, including abortion rights.

Thankfully, a new debate is opening about what is the best way to defend a woman's right to choose. Many people are concluding that it's right to take a side in this fight.

Many are also coming to the conclusion that they've had enough of broken promises, and that that the politicians in Washington from either party don't speak for us. And they're seeing the power of coming together collectively to defend our own rights.

Reproductive justice can't be relegated to whatever political calculation the Democrats are willing to make. We have to build a renewed fightback that doesn't compromise our rights away.