Lance Selfa, author of The Democrats: A Critical History, sorts through the debates and recriminations among party leaders who can't understand how they lost Election 2016.

AFTER "LOSING" an election that they--along with Republicans and just about every political analyst--thought they would win, and coming up short in their hopes for gaining seats in Congress, the Democrats are still reeling as they decide how to face the Trump-dominated future.

Of course, the word "losing" has to be put in quotes. It's only due to the Electoral College--the legacy of 18th century slave power in America--that Donald Trump, and not Hillary Clinton, is making appointments for the next presidential administration.

At last count, Clinton had 2.2 million more votes than Trump nationwide, and experts predict the margin of her popular vote victory will ultimately be between 2.5 and 2.7 million. Of the five presidential elections where the Electoral College awarded the presidency to the loser of the popular vote, Trump won the lowest percentage of the popular vote since John Quincy Adams in 1824.

If the shoe had been on the other foot--with Clinton winning the electoral vote and Trump winning the popular vote--do you have any doubt that we would have already heard and seen hundreds of ranting complaints from Trump, conservatives denouncing the outcome 24-7 on cable news, a raft of legal challenges and Tea Partying demonstrations calling for the political system to reflect the people's will? 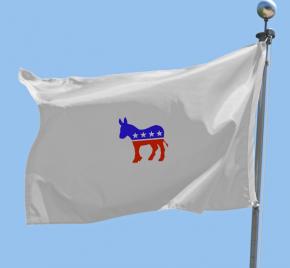 But the shoe isn't on the other foot. Instead, we have the spectacle of one Democratic leader after another--from Clinton to President Obama to liberal favorites Sens. Bernie Sanders and Elizabeth Warren--calling for Americans to support Trump because we're all "on the same team" or pledging to work with him on issues where he might "help working people."

This shameless capitulation is as good a place as any to start evaluating the Democrats' diagnosis of "what went wrong."

There will be a lot of inside-the-Beltway talk about messaging, campaign strategy and the like. But only a handful of Democratic politicians, if any, will call Donald Trump what Republican politicians called Bill Clinton for years after he won the White House in 1992 with just 43 percent of the popular vote: a "minority president."

Even when the Republicans were soundly trounced in 2008, and Barack Obama won the Electoral College and more than 50 percent of the popular vote, the Republicans didn't accept him as a legitimate president.

They indulged in all sorts of racist demonization of Obama, but more to the point, they used every maneuver and parliamentary trick they could--even threatening to send the U.S. government into default twice, at the risk of an international financial cataclysm--to sabotage Obama's administration.

Fat chance that the Democrats will try half as hard against Trump when he tries to impose his hard-right policies.

THE TOTAL absence of a willingness to challenge Trump's right-wing politics and agenda is relevant to the debate about the future that's unfolding inside the Democratic Party,

The sides, such as they are, have broken down along the lines of how the Democrats can win elections going forward and where it will find a popular base. The main focus is on Clinton's narrow losses in Wisconsin, Michigan and Pennsylvania, which gave Trump his edge in the Electoral College. The conventional wisdom is that Clinton lost in these "Rustbelt" states because the "white working class" has deserted the Democrats.

On one side are those who criticize Hillary Clinton's campaign for championing "identity politics," rather than "class politics" that would have appealed in those states.

The crudest expression of this argument may have come from the Democratic Party's Mahoning County (Ohio) Chair David Betras, who said he warned the Clinton campaign that it was losing the Rustbelt. "Look," he told the Washington Post, "I'm as progressive as anybody, okay? But people in the heartland thought the Democratic Party cared more about where someone else went to the restroom than whether they had a good-paying job...'Stronger together' doesn't get anyone a job."

Betras doesn't appear to have considered the possibility that both job programs and trans rights can be fought for at the same time. But neither has the other side of the debate, which essentially writes off parts of the working class as irredeemable.

The elite version of the argument came in a New York Times column by economist Paul Krugman, one of Clintonism's chief shills in the liberal media. He advised Democrats "to figure out why the white working class just voted overwhelmingly against its own economic interests, not pretend that a bit more populism would solve the problem."

Liberal commentator Michelle Goldberg accepts the same diagnosis of white workers in arguing against class appeals to win them away from Trump. "By voting for Trump, people like this have shown us what they value," she wrote at Slate. "In this moment of triage for civil society, liberals must hold fast to values of their own."

THE FIRST thing to say about this "debate" is that it's largely based on caricatures of the Clinton campaign.

Supporters of Black Lives Matter, abortion rights or trans rights--just to name a few issues routinely divided off as being about "identity"--would have had to look really hard to find much about Hillary Clinton's campaign that championed them. Sure, there was what Bernie Sanders called "the most progressive platform in Democratic Party history." But Clinton barely mentioned it after it was adopted at the Democrats' convention.

Clinton did criticize Trump for insulting women, Muslims, people of color and LGBTQ people. But that's different from actually campaigning to do anything to defend and extend the rights of the oppressed.

Perhaps tired of symbolism and empty rhetoric, Black and Latino voters turned out at lower levels in critical states. And more of those who did vote went for Trump in 2016 than voted for Mitt Romney in 2012.

If the Clinton campaign wasn't so focused on "identity" issues after all, what was its message?

An analysis of Clinton's spending on campaign advertising shows that more than three-quarters of her vastly larger number of ad buys attacked Trump's character and "unfitness" to serve as president. Many of these ads featured prominent Republicans criticizing Trump, a part of her campaign's failed and completely wrong-headed attempt to woo anti-Trump Republicans.

Meanwhile, only 9 percent of Clinton's campaign ads talked about the economy and jobs, compared to 34 percent of Trump ads

Surveying these statistics--and citing Ezekial Kweku's analysis for MTV News as well--Matt Karp wrote at Jacobin that "the Clinton campaign simply failed to generate excitement from working-class voters of all races."

That's a valuable point to emphasize, given that many of these analyses act as if only white people are workers, rather than people of all races and ethnicities.

IS THERE any substance to this "identity politics" vs. "populism" debate? If the whole point is a phony dispute about the Democrats' electoral "messaging," then we don't have to pay much attention. But to the extent that what's said in this discussion influences the thinking of grassroots activists preparing to confront the coming Trump administration, socialists should address it seriously.

As Socialist Worker has always maintained, the idea that fighting for the rights of the oppressed can or should be separated from the working-class struggle is completely alien to socialist politics.

Any left worthy of the name must stand with all who are targets of right-wing attacks already and in the years to come: Muslims, people of color, women, unions, immigrants, working people, immigrants and LGBTQ people, to name a few.

We believe in the truth of the old labor movement slogan: An injury to one is an injury to all. The working class as a whole can never advance as long as some section of it can be victimized, scapegoated or otherwise oppressed without a response from the rest of the class.

That understanding and spirit of unity and solidarity has to underlie every part of the resistance to the Trump regime as it comes to power in January.

But even a passing glance at the scramble among the Democratic elite in the final days of the Obama presidency shows the exact opposite.

Among House members, Ohio Rep. Tim Ryan is challenging Democratic leader Nancy Pelosi on the grounds that he'll represent the forgotten workers of the Rustbelt. Meanwhile, a number of liberal legislators like Warren and Sanders are backing Minnesota Rep. Keith Ellison as a "progressive populist" to take over chairing the Democratic National Committee.

But if the echoes of the liberals' debates can be heard distantly in these leadership contests, the establishment will prevail elsewhere.

We know for sure that the new Senate Minority Leader, replacing Harry Reid, is New York Sen. Chuck Schumer, one of the most pro-Wall Street members of Congress and a vocal opponent of Obama's nuclear deal with Iran. There's nothing "populist" or "identity politics" about Schumer--and his position will make him the highest-ranking Democrat in Washington once Obama departs the White House.

Schumer has endorsed Ellison for DNC chair, while also saying that he's willing to work with Trump--a donor to Schumer's past campaigns--on issues like jobs and infrastructure.

This illustrates one of the contradictions that the Democratic leadership races won't resolve. Party leaders can tinker with new messages, "get out the vote" mechanics and policy statements.

But if none of them can figure out how to mount an opposition to Trump--even when they have the majority of the public on their side--they'll find that more and more people from every part of the Democrats' traditional base will desert them.