James Plested argues that a system that puts profits above humanity can't address an existential threat to our future, in an article for the Australian newspaper Red Flag.

THE EARTH revolves around the sun. That was the simple proposition that resulted in 17th century Italian scientist and astronomer Galileo falling foul of Catholic authorities, who banned his works and placed him under permanent house arrest. The idea espoused by Galileo and other scientists was, according to a Papal Condemnation of June 1633, "formally heretical, because it is expressly contrary to Holy Scripture."

According to scripture, the earth was the center of the universe, and the sun, the moon and the planets all revolved around it. Anyone who dared to contradict this view was silenced. The authority of the church--the ideological "glue" that held together Italian society at the time and enabled its rulers to continue in their position of power and privilege--depended on it.

The world has come a long way since then. The Industrial Revolution of the 18th and 19th centuries was accompanied by a revolution in science, which battered down the doors of religious authority and placed itself at the center of the new society and economy. Reason and rationality had finally won the day. 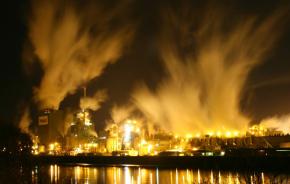 Or so it seemed. For while there's no doubt that science has continued to make great strides from the earliest days of capitalism, its status as a rational guiding light for human society has come under threat from a new and very dangerous form of irrationalism: the irrationalism of the market.

This new irrationalism shares many features with its religious predecessors. It has a god--profit--whose unquenchable appetite demands an endless and ever-increasing scale of sacrifice from its human slaves. The most fearsome of religious despots of earlier centuries could only dream of the kind of misery, death and destruction wrought in its name.

In place of the church's "holy scripture," we have the nostrums of neoclassical and neoliberal economics. And in the form of government departments of treasury and finance, business associations and innumerable generously funded right-wing think tanks, we have our very own "high priests" of the market--untiring in their commitment to spread the gospel and to silence voices of opposition.

This new capitalist irrationalism, the religion of profit, makes itself felt across all the many fields of science. It dictates where the money goes--which research programs get funded and which are consigned to the margins. Sometimes this results in innovations that are genuinely useful and beneficial to humanity. Overall, however, it has a clearly destructive influence.

Think, for example, of the hundreds of billions of government money poured into the development of new military technology--science in the service of killing. Or think of all the potential scientific advancements that are held back for lack of adequate funding because they can't be easily "monetized" by global corporations.

NOWHERE IS the clash between science and capitalist irrationalism starker than in the case of the climate. Here, it really is a Galileo vs. the church kind of scenario.

It has long been established that emissions of carbon dioxide and other greenhouse gases from industry are causing a rise in global temperatures. According to analyses by NASA and the U.S. National Oceanic and Atmospheric Administration, in 2016, average global temperatures were almost 1 degree warmer than the mid-20th-century average. The three hottest years on record, going back to 1880, were 2016, 2015 and 2014 respectively; 16 of the 17 hottest years have occurred since 2001.

This is not some "natural anomaly." Shifts in global average temperatures of this magnitude have happened before, but the time scale has been millennia, rather than decades. The rapid change we're seeing today is unprecedented and can be attributed only to the explosion of greenhouse gas emissions in the latter half of the 20th century.

A 2013 report published in the journal Scientific Research Letters analyzed almost 12,000 peer-reviewed scientific studies from 1991 to 2011 and found 97 percent agreement among scientists that global warming is being driven by human activity.

Another study, "Examining the Scientific Consensus on Climate Change," published in Earth and Space Science News in 2009, found that the level of agreement was highest among those whose expertise was most directly climate related. Unsurprisingly, those with the lowest level of agreement--at 47 percent--were economic geologists, whose expertise is in the study of metals and minerals used in industry.

To say the geologists have their head in the sand would be a charitable explanation of this discrepancy. A more likely cause is the company they keep. The fossil fuel industry has very deep pockets, and has been more than willing to promote and reward scientists prepared to cast doubt on the climate change consensus. Repent and you shall be saved!

Capitalists and their paid-up servants in politics and the media have become masters of what in the Catholic context would be called apologetics. They'll use every rhetorical weapon at their disposal to deny or at least sow confusion about the science of climate change, and to defend the glittering god of profit that rules over the fossil fuel-based market economy that's causing it.

In the case of its more extreme disciples, this means dismissing the whole notion of climate change as a shadowy global conspiracy. This is where Donald Trump seems to stand. In 2012, he tweeted, "The concept of global warming was created by and for the Chinese in order to make US manufacturing non-competitive".

If Trump's appointments to the Environmental Protection Agency are anything to go by, it's a view he maintains to this day. Take Myron Ebell, who Trump chose to head the agency's transition team. According to Ebell, the environment movement is "the greatest threat to freedom and prosperity in the modern world" and "the climate-industrial complex is a gigantic special interest that involves everyone from the producers of higher priced energy to the academics that benefit from advancement in their careers and larger government grants."

The earth doesn't really revolve around the sun, you see. That's just a plot by the astronomy-industrial complex.

Trump's choice of Environmental Protection Agency (EPA) Director Scott Pruitt has sued the EPA more than a dozen times. Most recently, while Oklahoma attorney general, his target was the "Clean Power Plan," a policy that required power plants to reduce carbon emissions by 32 percent by 2030.

With an outright climate change denialist like Donald Trump in the White House, the world is in a dire situation. We have to remind ourselves, though, that the conditions for a climate Trumpocalypse have been created by the inaction of politicians and other global "decision makers" who've been ignoring scientists' warnings for decades.

TRUMP REPRESENTS a clear and present danger to efforts to curb global emissions. But at least he appears as the climate vandal that he is, someone whose policies should be resisted at every turn. Historically, it's been the more savvy apologists, such as Barack Obama, who've done the most damage--leaders who've disarmed the resistance by making a lot of noise about the need for climate action while actually maintaining policies that have resulted in global emissions continuing to climb.

Trump may well be the one to have given a green light to the Keystone XL and Dakota access pipelines. But Obama and his Canadian counterparts presided over the expansion of the heavily polluting tar sand and shale oil industries that the pipelines will serve. And Australia has had a string of leaders, including Kevin Rudd, Julia Gillard and most recently Malcolm Turnbull, who've voiced support for action on climate change while continuing to subsidize the expansion of Australia's most carbon-intensive industries.

Barack Obama and Donald Trump. Kevin Rudd and Tony "Coal is good for humanity" Abbott. The church of capitalist irrationalism is a broad one, and its adherents are adept at creating an appearance of dissent within its ranks that can help confuse and co-opt voices of opposition, and push back the potential for real change.

Perhaps some genuinely believe that climate change is a problem. They're prepared to admit that, indeed, the earth does revolve around the sun. But their commitment to capitalism keeps them from making an open break. They bow before the higher authorities--in this case, the deep-pocketed captains of the fossil fuel industry--or they recommend market-friendly "solutions" that can provide the appearance of action while allowing business to carry on, more or less, as usual.

It's now more than four decades since scientists began to warn of the possibly dire consequences of global warming. And yet, despite seemingly endless series of global summits and "commitments" (most recently in Paris), despite the mountains of evidence and despite the hundreds of millions of dollars poured into lobbying efforts by major environmental organizations, the situation today is worse than ever.

The climate "warning lights" are flashing red. We're witnessing early signs of potentially catastrophic developments such as the breakup of the West Antarctic ice sheet, which would cause sea level rises large enough eventually to drown coastal cities and towns across the world. The frequency of extreme heat waves, droughts, storms and cyclones is increasing; and the poorest sections of the world's population are already suffering from growing food insecurity.

Even under the most optimistic of scientific projections, the situation is likely to deteriorate over the coming decades. The "climate crisis" is very much upon us.

HOW, THEN, did we get here? Why have climate scientists been maligned and outcast like the "heretics" of Galileo's time? Why haven't any of the many practical suggestions for leading a rapid shift away from fossil fuels been taken up by political leaders?

The answer isn't that the "decision makers" in business and politics don't understand the problem. Environmental organizations that hope to convince them by publishing easily digestible reports and fact sheets are missing the point. The problem isn't that our leaders are stupid. It's that, as was the case with astronomy and the Catholic authorities of the 17th century, the science of climate change is a threat to the (economic) theology on which their power and privileges are based.

Viewed from the perspective of humanity as a whole, it would be rational for us to carry out a rapid shift away from fossil fuels. This process should have been started decades ago. But from the perspective of capitalism, a system that is grounded in the pursuit of profit, a shift of this magnitude represents a direct threat. Instead, faced with growing signs of catastrophe ahead, we're given palliatives--urged to "think green", to turn the lights out for an hour, to buy "carbon offsets" and so on.

But if the science is right, then we need to break with the logic of capitalism.

Capitalism means competition between individual companies seeking to maximize their profits by minimizing costs. And it means the militarily backed scramble of nation states seeking to secure the resources and markets "their" capitalists need to get ahead. None of this is conducive to solving a problem like that of climate change, which requires the coordination of action and sharing of resources on a global scale.

The world is in the grip of capitalism's climate crisis. Our salvation depends on our ability to overcome it.