What does it mean to make “America First”?

Trump has won some support among workers and even unions with his proposals around trade, but is this billionaire really on their side? Lance Selfa explains why not.

PERHAPS IT'S foolish to take anything Donald Trump says as an articulation of core principles or beliefs. But this passage from his inaugural address hit many like a bolt of lightning:

From this day forward, a new vision will govern our land. From this moment on, it's going to be America First.

Every decision on trade, on taxes, on immigration, on foreign affairs, will be made to benefit American workers and American families. We must protect our borders from the ravages of other countries making our products, stealing our companies, and destroying our jobs. Protection will lead to great prosperity and strength.

I will fight for you with every breath in my body--and I will never, ever let you down. America will start winning again, winning like never before.

This appeal to economic nationalism is very much in line with his "Make America great again" campaign theme. But for those whose political memory goes back a little ways, "America First" means something very specific and very problematic. 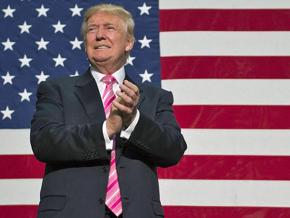 In the late 1930s, the Roosevelt administration was increasing its support for an interventionist foreign policy that would assert the U.S. on a world level. After the Second World War started in 1939, the administration lent massive amounts of military aid to Britain, with the intention of drawing the U.S. into the conflict.

From the late 1930s up to the Japanese attack on Pearl Harbor, Hawaii, in December 1941, a substantial sentiment against U.S. intervention in the European war developed. While on the whole sincerely opposed to a repeat of the imperialist slaughter of the First World War, the anti-intervention mood also intersected with an isolationist, rather than internationalist, approach to the coming conflict.

America First also called for a U.S. military buildup to defend the continental U.S.--a policy that came to be known as "Fortress America."

The banner of "America First" was also embraced by supporters of the anti-Semitic "radio priest" Father Charles Coughlin, along with fascists and sympathizers with the Nazi regime in Germany. In speeches for the America First committee, the aviator Charles Lindbergh contended that Britain and Jews were the main advocates for U.S. intervention in the war, and that the interventionists' main aim was to defeat Germany.

Other mainstream political figures--like Joseph Kennedy, ambassador to Britain and father of future U.S. President John F. Kennedy--shared the "America First" outlook. He contended that Germany was too strong, and that Britain and U.S. should make peace with the Nazis.

After the Japanese attack on Pearl Harbor and the subsequent U.S. intervention, America First organizations collapsed. The U.S. emergence from the war as a global superpower marginalized support for the "American First" outlook of staying out of foreign entanglements while building a "Fortress America."

In the 1990s and 2000s, far right, anti-Semitic pundit and presidential candidate Patrick Buchanan carried the "America First" torch for a while. Then Trump came along.

THIS BRIEF history of "America First" politics provides a context for Trump's rhetoric. It also shows that, far from being a common sense advocacy for ordinary people in the U.S. versus global elite, the slogan drags along more than its share of historical baggage. It wasn't accidental that Trump's presidential proclamation on Holocaust Remembrance Day failed to mention the genocide of European Jewry.

Trump's America First policy asserts that "[e]very decision on trade, on taxes, on immigration, on foreign affairs, will be made to benefit American workers and American families."

That rhetoric sounds radical, especially when compared to that of the last generation's status quo, when most decisions on trade and foreign affairs did little for U.S. workers and their families. For most of the last generation, politicians--both Democratic and Republican--have told us that global trade is like a force of nature, which the U.S. economy can only adapt to, not control.

This notion of globalization operating outside the influence of the world's most powerful government was always false. U.S. state policy undergirded the bipartisan regime of free trade and the U.S. global military projection. As that purveyor of "flat-world" banalities Thomas Friedman once put it, "McDonalds cannot flourish without McDonnell Douglas."

If Trump's tumultuous first week showed anything, it showed just how much governmental action can shift the terms of engagement and debate on these questions.

Given that decades of corporate, governmental and institutional practices are invested in the neoliberal regime, it remains to be seen whether any or all of Trump's actions will be sustained as new policies for the long run. But in the immediate term, they present our side with a tremendous set of challenges.

THE FIRST of these is assessing whether they are reality-based or not. Millions of people--among them supporters of Bernie Sanders--would agree with the sentiment of protecting "our borders from the ravages of other countries making our products, stealing our companies, and destroying our jobs," whether or not they agree with Trump's rhetoric.

Yet the empirical evidence that trade arrangements--like the North American Free Trade Agreement (NAFTA) or China's accession to the World Trade Organization (WTO)--are the main culprits in the decline of U.S. manufacturing jobs and workers' standards of living is thin.

The liberal University of California-Berkeley economist J. Bradford DeLong calculates that of the decline in U.S. manufacturing employment since 1971 that is greater than that experienced by other industrial powers undergoing similar structural economic shifts, only one-tenth of even this extra amount can be attributed to NAFTA and trade with China.

Nevertheless, we know that during the same period, living standards for workers in the U.S.--and not just those in manufacturing--stagnated. In real terms, the median U.S. household income is no higher than it was in the early 1970s.

Clearly something is wrong in the U.S. economy, and no amount of statistical modeling is going to convince people that they should just accept it. So when figures as diverse as Trump and Sanders point to global trade deals as the culprit for declining living standards, they at least have the merit of relating to people who know--unlike the Friedmans and the Clintons--that not all is right with the neoliberal world.

Trump promotes the notion that other countries are "ripping off" the U.S. through unfair trade deals. But this inverts reality.

One drastic effect of NAFTA has been the destruction of small farming in Mexico when that sector was forced into unfair competition with U.S. agribusiness. By some estimates, more than 1 million farmers have been driven from the land. Many of the victims moved to Mexican cities or crossed the border into the U.S. without documents to find work.

"Free trade" agreements like NAFTA are engineered for the benefit of U.S. business, as levers to pry open sectors of other countries' economies to investment and services in the first instance.

Second, they allow for the free movement of capital across borders, but not the free movement of labor. In fact, the era of NAFTA coincided with a huge increase in "border security" and repression that produced a record number of deportations--more than 2 million--under the Democratic Obama administration.

That aspect of "Fortress America"--repression at the border--is already in place. Trump proposes to increase it. But the record should show that free trade policies didn't put out a welcome mat to immigrants, either.

OUR SIDE will continue to analyze the economic ramifications of Trump's policies, but we're faced today with what to do about the political challenges they represent.

In this case, there is a more complicated test for the left. Trump's protectionism and rhetoric about bringing manufacturing jobs back to the U.S. have already won praise from union leaders like Teamsters President James Hoffa. Hoffa and other labor officials likewise hailed Trump's executive order aimed at restarting the Keystone XL and Dakota Access Pipeline projects that activism forced the Obama administration to shelve.

After a White House meeting with Trump, North American Building Union President Sean McGarvey declared, "We have a common bond with the president" and that "We come from the same industry. He understands the value of driving development, moving people to the middle class."

In speaking to reporters, McGarvey and Laborers President Terry Sullivan--whose unions both endorsed Hillary Clinton for president--pointed out that they had never been invited to a White House meeting in the eight years of Obama's presidency.

But there's something else besides the Democrats' neglect behind the labor leaders' cozying up to Trump and his America First program: It gives them an alibi for their failures to do much of anything to reverse the long-term decline of their organizations and to protect their members from worsening conditions.

Those problems stem from anti-union U.S. employers and anti-labor U.S. politicians, not overseas competitors or immigrants.

Hoffa, for example, has a long record of cooperating with employers while bargaining away the rights and benefits of rank-and-file Teamsters.

For the likes of Hoffa, it's much more convenient to blame international competition or Mexican truckers for eroding wages and conditions than to confront U.S. employers--even ones, like UPS, making record profits. Joining with Trump under the banner of "America First" won't change Hoffa's behavior at all.

Labor leaders like Hoffa give Trump the cover to paint his economic program--which in reality is based on tax cuts for the rich, allowing corporations free reign, and selling the U.S. as a low-wage economy--as "populist" and pro-worker. And they lend legitimacy to an administration intent on attacking whole sections of the working class, including immigrants and the undocumented.

Any labor union or worker who signs up with Trump's "America First" program will find out that--rhetoric aside--Trump will put them last.

Thanks to Joe Allen for help with this article.