We won’t be thrown in the testing deep end

Jesse Hagopian, editor of More Than a Score: The New Uprising Against High-Stakes Testing, takes on the argument that high-stakes standardized tests are the best way to evaluate students, in an article for The Progressive magazine.

AS WE enter the high-stakes testing season, a great uprising to opt out of these punitive and reductive exams is sweeping the country. So it's no surprise that corporate education reformers--attempting to defend the multibillion-dollar testing industry--have been launching aggressive attacks on the movement.

One such attack targeted one of the main rallying cries of our movement and the title of the book I edited More Than a Score.

In an article titled "More than Score. Yes. Duh?" Erika Sanzi argues that it is obvious that students are more than a test score, "but that doesn't mean that their scores on tests aren't valuable to them, their parents, or their schools." She goes on to ridicule people who believe that the overuse of high-stakes testing is distorting education, saying: "It is baffling that highly intelligent and otherwise rational people have chosen to latch onto this bumper sticker-sounding slogan."

Our kids take swimming tests. They don't lose the essence of who they are because they fail to float on their back for 30 seconds or tread water for a minute. They just try again next time. It's probably safe to say we all know people who have failed their first driver's license road test. They've all lived to tell about it, most even laugh about it, and it certainly doesn't define who they are. It was a brief failure. Life is full of them. 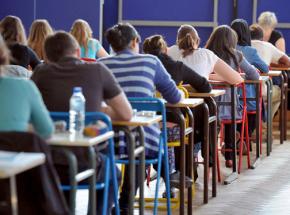 Magnificent! Here you have the total confusion of the education "testocracy" distilled. Because the entire point of the opt-out movement is to reduce the amount of multiple choice standardized tests and move to assessments like the driving road tests and swimming tests. However, imagine for a moment if we treated the swimming test like the standardized tests in school that Sanzi advocates. Imagine if we sat kids down in rows of desks and said:

This exam will test your ability to swim. Mark the bubble that corresponds to the best answer choice. Consider this sample question:

The fastest swimming stroke is the:
1. butterfly
2. crawl stroke
3. fish kick
4. backstroke
5. None of the above

When you have completed this exam the results will be scored. If you score well, we will throw you into the deep end. If you score poorly, even if you are a great swimmer, you will remain in the shallow end. In addition, if too many of your classmates score poorly on this exam, we are going to close down your pool altogether.

AS SILLY as this scenario seems, it is what corporate education reformers (including the Walton family, which helps funds the website Sanzi writes for) are imposing on our public schools. Worse, the attitude that if a child fails a test she should take comfort that it is only a "brief failure" is completely out of touch with the severely punitive nature of high-stakes testing these days, in which a low test score can mean a student does not graduate, teachers are fired, and whole schools are shut down.

In the wake of the Seattle MAP test boycott, leading educators from around the city formed an assessment task force and produced a document defining authentic assessments as:

Those that reflect actual student knowledge and learning, not just test taking skills; are educational in and of themselves; are free of gender, class and racial bias; are differentiated to meet students' needs; allow opportunities to go back and improve; and undergo regular evaluation and revision by educators.

One important alternative to standardized testing is performance-based assessment, which promotes inquiry, problem solving and critical thinking. My colleagues and I at Garfield High School have begun collaborating with the New York Consortium for Performance Based Assessment. (The partnership is portrayed in one section of the new documentary, Beyond Measure). As Gail Robinson writes of the Consortium:

While most New York students must pass state exams in five subjects to graduate, the consortium's 38 schools have a state waiver allowing their students to earn a diploma by passing just one exam: comprehensive English. (An additional nine schools have a partial waiver.) Instead, in all subjects including English, the students must demonstrate skill mastery in practical terms. They design experiments, make presentations, write reports and defend their work to outside experts.

THE PERFORMANCE-based assessment model is very similar to the process a PhD candidate undergoes in preparing a dissertation and defending it to a panel of experts. Multiple choice standardized tests are good at demonstrating students' ability to spot what are called "distractor questions," and students with the resources purchase test prep classes that are able to train students to eliminate wrong answer choices better than their peers. However, the ability to eliminate wrong answer choices is not authentic to most real life situations students will face. In the world outside of corporate education reform, students will need to be able to research issues, work collaboratively in groups, develop arguments, solve real life problems, and more. Performance-based assessments at the Consortium schools allow students to engage in those real life skills--much the same as a swimming test.

Parents and teachers across the country have united to demand an education system that recognizes children's needs aren't satisfied by filling in bubbles on an exam. So, before we throw our schools into the deep end, let's demand authentic assessment now!

First published at The Progressive.