Our votes on November 4

It's important to support left-wing candidates independent of the two main parties.

THE REPUBLICANS and Democrats rule over what former independent presidential candidate Ralph Nader called a "two-party duopoly." The two main political parties in the U.S. system go to great lengths to keep independent alternatives from reaching the ballot.

As a result, voters on November 4 won't have many real choices to make in the polling booth.

Even in the cases when there are real ideological differences between Republican and Democratic candidates, they remain within limits acceptable to the parties they represent. And the differences between the two parties are much smaller than the similarities that unite the Republicans and Democrats as two wings of a single political establishment.

The problem with voting for the Democratic Party as a "lesser evil" against the Republican "greater evil" is that you're certain to get evil, one way or another. The proof is in the pudding: Look back at the decades of Democratic Party candidates who claimed they were the only thing standing between working people and the Republican budget-cutting maniacs--who then presided over budget cuts themselves, sometimes slightly less harsh and sometimes not. 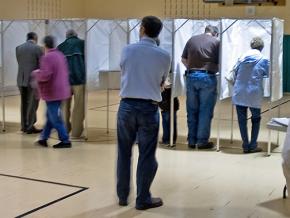 That's why it's important to resist the "lesser evil" mantra and cast your vote, wherever you can, for a genuine left independent candidate. There aren't many alternatives to the two parties in this election, but we hope our readers will support them where they are running.

One bright spot is the Green Party campaign of Howie Hawkins for governor of New York, along with Brian Jones, a longtime contributor to SocialistWorker.org, running for lieutenant governor.

Hawkins and Jones have made important strides in pulling together individuals and organizations--including a number of teachers' union locals and progressive groups--fed up with the status quo under Democratic Gov. Andrew Cuomo. And these candidates hope the energy of their campaign will flow back into social justice struggles after the election.

Hawkins and Jones won't win, but opinion polls show them getting as much as 9 or 10 percent of the vote--even higher among people of color. In some upstate cities and towns where natural gas fracking is a pressing issue, Hawkins-Jones could push the Republican sacrificial lamb, Rob Astorino, into third place. A strong turnout across the state will send a message of discontent with business as usual under Cuomo--and put our side in a stronger position to resist the ongoing austerity agenda.

In Oakland, Calif., a total of 15 candidates are running for mayor where liberal Democrat Jean Quan--notorious for overseeing a violent crackdown of the Occupy movement--is trying to get re-elected. In this race, civil rights attorney Dan Siegel stands out against the grey blur of Quan and other Democrats with his independent campaign, built around fighting for a $15 an hour minimum wage, championing universal pre-school for all Oakland children and confronting the epidemic of police violence.

In Seattle, Socialist Alternative candidate Jess Spear is running against Frank Chopp, the longest-serving state House Speaker in Washington history and a fixture of the state's Democratic Party leadership.

These challenges may be modest, but they are a contribution toward the long-term goal of building a fighting electoral alternative to the Democrat-Republican stranglehold over mainstream politics.

VOTERS IN many states and localities will be able to say yes or no on a variety of referendums. Often, the outcomes of these ballot measures provide a better measure of what voters think than election results, given the limitations of the two-party system.

Like every year, there is a mix of positive and negative measures. In Oregon, Alaska and Washington, D.C., voters will decide on referendums for marijuana legalization. In California, Proposition 47 continues a long-term effort to radically lessen the penalties for nonviolent drug offenses, which have taken such a heavy toll in Black and Brown communities. Meanwhile, the right wing is championing three initiatives to restrict abortion in Tennessee, Colorado and North Dakota--the latter measure would enshrine the "personhood" of fetuses in the state constitution.

At the start of the year, it seemed like there were campaigns building for referendums to raise the minimum wage in many states and localities. These efforts seemed to fizzle as the year went on, in part because major unions gave most of their attentions to supporting Democrats, as usual.

In the Bay Area, however, there are substantial minimum-wage measures at stake in San Francisco (Proposition J) and Oakland (Measure FF, known as "Lift Up Oakand"). Both have some conditions and phase-in periods, but if they pass, San Francisco and Oakland will have, along with Seattle, the best minimum wage laws in the country.

The minimum wage is on the ballot in five states. Alaska, Arkansas, Nebraska and South Dakota all have referendums that would raise the state's minimum wage over a period of years. The minimum would stay well below the $15 an hour popularized during the struggles of low-wage workers, but it would be a significant increase for large numbers of the working poor--and victories on measures to help working people in these Republican-leaning states would send a message by themselves.

Illinois' minimum wage referendum, on the other hand, shows the limitations of the process. Voters will be asked if they support raising the state minimum wage to $10 an hour, but the referendum is advisory. It was put on the ballot by the Democratic Gov. Pat Quinn to pump up liberal turnout and put his right-wing Republican opponent on the spot. While it would be better if voters said "yes" to this measure than "no," the fight for a living wage will depend much more on what happens after November 4.