The future of Ireland?

Shaun Harkin reviews Up the Republic, a collection of essays by historians, lawyers, economists and writers discussing the next steps for Ireland.

APPARENTLY, THINGS are beginning to look up again in the Republic of Ireland. Well, so we are told. The economy is out of recession, but barely, and the country is set to exit the International Monetary Fund (IMF) bailout program on December 15.

Ireland, once a model of neoliberal growth, is now being held up to its struggling European counterparts as a model for post-2008 crisis recovery. Joseph Stiglitz recently said he was astonished at the ability of the Irish to "suck up austerity" without the same intensity of protests, riots and demonstrations as elsewhere on the European continent.

And, austerity has been punishing. Since 2008, consecutive governments pushed through almost $40 billion in spending cuts and tax increases to cover bondholder losses. The 2014 budget, Ireland's eight austerity budget, includes billions more in cuts.

Irish workers, the poor and the young are facing a "lost decade" of poverty, debt and reduced expectations. Others, mostly the young, will likely join the over 200,000 who have been forced out of Ireland to look for employment since the collapse of the Celtic Tiger. 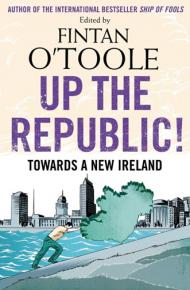 Fintan O'Toole, columnist and assistant editor at the Irish Times, considered the Irish paper of record, is a prolific writer with a wide readership. He was also the New York Daily News drama editor from 1997 to 2001.

In The Lie of the Land: Irish Identities, O'Toole documented how Ireland has been transformed socially, economically and politically during the last 40 years. For instance, the massive decline in adherence to Catholicism, the dominance of urban Ireland over what was traditionally viewed as a rural country, and the growing assertiveness of women in Irish society.

In Ship of Fools: How Stupidity and Corruption Sank the Celtic Tiger, O'Toole gives expression to the "hot anger and cold fury" directed at ruling elites, bankers and politicians who collaborated to make themselves enormously wealthy and lay the basis for a crisis driving hundreds of thousands into poverty, unemployment, debt and emigration. But, O'Toole argues, in addition to anger and fury, the crisis also created "deep despair--a sense of futility and fatalism."

O'TOOLE FOLLOWED up Ship of Fools with Enough is Enough: How to Build a New Republic.

The question of what kind of "republic" was eventually established in Ireland following its exit from the British Empire became part of recent political discourse as a response to understanding how Ireland's political leaders, corporate rulers and elites could function in such a hidden and undemocratic manner.

In Enough is Enough, O'Toole argues that the 1919 Democratic Program of the First Dáil would be a more effective map towards a "new Irish republicanism." The 1919 Program O'Toole refers to was completely ignored following Ireland's revolutionary war by the founders of the new Free State.

In fact, most members of the First Dáil had never read the document. Indeed, the Program's publication and distribution was a concession agreed to by nationalists in exchange for the Labour Party's ill-advised acceptance of subservience in forthcoming elections.

The program contains what could be described as "socialist" aspirations but for the most part is vague.

In How to Build a New Republic, he puts forward 50 ideas for action such as reducing the size of the Dáil to 100 members, resisting attempts to cut the minimum wage, increasing taxation levels to European averages and introducing property taxes to help fund local government to put Ireland on the road to a new republic. The "ideas" are mostly unobjectionable but are hardly inspiring calls for sweeping action.

Ship of Fools and Enough is Enough both gave expression to widespread anger at the policies of the rich and their political institutions and were written with a genuine sense of urgency that something must be done. However, they were also extremely politically limited given the scale of the crisis embroiling Ireland and the globe in the aftermath of Wall Street's implosion.

Unfortunately, the political limitations of his two books dealing with Ireland's economic crisis come even more to the fore in Up the Republic: Towards a New Ireland. Fundamentally, O'Toole fails to locate Ireland's crisis in the context of the failure of global capitalism. Up the Republic's attempt to systematize the Irish meltdown in the generalities of what republicanism means moves further from the problem and deeper into irrelevant abstraction.

O'TOOLE WRITES that it is an "inescapable reality that the center of governance that moved from London to Dublin in 1922 has now moved again to Berlin and to Frankfurt, home of the European Central Bank, which is unquestionably the single most powerful institution in Irish public life."

To demonstrate this, he explains how in 2011 a German Bundestag committee in Berlin scrutinized a proposed Irish fiscal budget before it had been discussed by the Irish government cabinet or the Irish Dáil. This at once demonstrates Germany's hegemonic power within the European Union and Ireland's subservient relationship the European institutions.

It clarified what had been murky...that the parliament is largely irrelevant and that the constitution has been silently suspended. It marked the death of an illusion: that Ireland is, in any meaningful sense, a republic. And it raised a poignant question: what was all that fuss and bother of the Irish 20th century, all the thrill and trauma of a struggle for independence, actually about?

This is shocking and true, but surely this is a question that could be asked of any nation-state anywhere on the planet.

The Republic of Ireland is a member of the European Union where neoliberal policies for all member states are increasingly determined in Brussels not locally. The tendency during the crisis has been toward more authoritarian government and greater "democratic deficits" in order to ram through state organized bailouts on behalf of bankers, investors and privileged minorities.

Capitalism without democracy is not a contradiction. The European Union is a project in the interests of the continents ruling classes, including those in Ireland, where the goals of increasing capital accumulation and making Europe competitive have intentionally eroded political accountability.

The mostly academic contributors in Up the Republic take up the question of what "republicanism" means and point toward lofty but well-meaning terms such as common good, citizen participation, equality and justice.

However, the limitations of any kind of republic, whether in Ireland or elsewhere, that is dominated by capitalism are not addressed at all. It is the avoidance of any discussion of capitalism as a totality, class and class struggle that gives it an abstract and out of touch feel.

The words on the page have drifted away from the concerns of the real, the living and the struggling.

IN THE chapter "Citizens or Subjects? Civil Society and the Republic," Fred Powell presents a caricatured version of Karl Marx who rejected "civil society" in favor of "Gramsci's perspective" where we are told "the revolutionary task was not about the Jacobin-Leninist of seizure of power, its inevitable violence and totalitarian outcome."

This would indeed be news to Gramsci.

Powell's caricature of Marx continues when he tells us that Gramsci "fundamentally changed Marx's economic determinism by adding culture to the cause of revolutionary change."

One wouldn't know from Powell's interpretation that Gramsci founded an Italian Communist Party modeled and inspired by Lenin and Russian Bolsheviks with the goal of a working-class seizure of political and economic power.

Princeton professor Philip Pettit gives a very positive account of Spain under the leadership of Socialist Party (PSOE) prime minister José Luis Rodríguez Zapatero. Surely we can raise our horizons beyond an administration that pushed through austerity and made it easier to fire workers?

Such gushing praise for social democrats in power points depressingly toward the limitations of O'Toole's political vision.

Yet, elsewhere he has become increasingly sharp in his criticism's of the Irish Labour Party--now a junior partner of the governing coalition, for their implementation of austerity, the betrayal of their mission and supporters.

The attempt to take up the question of what a republic means and could be in the context of forging "another Ireland" certainly has merit. However this collection of essays falls well short of offering a way forward.

O'Toole's reluctance to frame the Irish crisis in the context of a global crisis of capitalism fails his readers who are desperate to understand why the bottom fell out of their lives. As a byproduct, it ends up reinforcing a nationalist prism from which there can be no escape as his point about the German Bundestag makes.

The Irish revolutionary socialist James Connolly argued no real republic could ever exist in Ireland if the working class was divided by partition imposed by an imperial power and dominated by a ruling minority.

Connolly, in his incisive book Labour in Irish History, demonstrates why the kind of appeals O'Toole makes to the Irish population in general, including Irish political leaders and the business community, to make a better Ireland should be rejected.

Irish history, Connolly argues, demonstrates that only the Irish working class has an interest in fighting for a fully democratic republic.

In our era of global capitalist crisis and deepening inequality, Connolly's vision of a total revolutionary upheaval of the existing order and its replacement with a flourishing "workers republic" is a much more compelling starting point. Unfortunately, O'Toole, despite his insistence on using history and maps as a guide to the present, refuses to see it.