A rebel for a better world

If we can contribute a fraction of what Howard Zinn gave to the fight for social justice, then there's hope for our collective future.

I WAS absolutely devastated to learn that my friend, Howard Zinn, was gone from the world.

Howard gave his time and energy to so many struggles for justice. To the last days of his life, he was keeping a schedule that would punish most of us.

I think the first time I saw him speak was at an anti-death penalty meeting in Boston, sometime around 1996. He was the last of several speakers, but stood out for his clarity and his humor.

I was particularly struck by the way he concluded: "I am very sorry that I cannot stay for the entire meeting. I have to leave now, because I believe I have a broken rib." Howard had fallen into an unmarked construction hole on his way to the event, but instead of heading straight to the hospital, he managed to make it to the meeting and to speak, nevertheless. He was in his mid-70s.

Anyone who spent any time with Howard knows of his tremendous generosity of spirit, and of course, his legendary humor. When he and I first rehearsed his one-man play, Marx in Soho--about Karl Marx, returned to 20th century Manhattan to comment on capitalist society today--I was visibly nervous. Can you imagine?

Brian Jones is a teacher, actor and activist in New York City. He is featured in the new film The Inconvenient Truth Behind Waiting for Superman, and his commentary and writing has appeared on MSNBC.com, the Huffington Post, GritTV and the International Socialist Review. Jones has also lent his voice to several audiobooks, including Howard Zinn's one-man play Marx in Soho, Wallace Shawn's Essays and Noam Chomsky's Hopes and Prospects.

On that first day, I appreciated more than anything else Howard's patience. Over 10 years later, I still remember the gentle way he would insist that I milk the play's humor. "That line is meant to be funny, you know," he would chide me, with that impish, irresistible grin of his. I was 25 years old.

For the next decade, I performed Marx in Soho for audiences great and small all over the country. On some lucky occasions, Howard appeared to introduce the play himself, and to answer questions afterward.

As I traveled, I always corresponded with Howard about my misadventures. He would often write me a few words of encouragement in reply. Once, after a show in some small town, I stayed up all night debating with the anarchist group that had sponsored me. I wrote about it to Howard, and he replied:

Dear Brian:
You are making theater history! Did Marlon Brando sit up until 3 a.m. with members of his audience discussing socialism? No--he went to sleep.

Years later, when he published the anthology Voices of a People's History of the United States, Howard and co-editor Anthony Arnove asked me to participate in some public performances of selected material from the book. 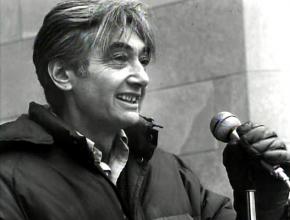 When the film based on that book, The People Speak, appeared on The History Channel last December, the right-wing blogosphere tried to start a campaign to ban it. I wrote a column that dismantled one of these attacks, and shared it with Howard. The next day, he sent me an e-mail:

Thanks for your column, Brian. It's good! I'm hoping that now they will concentrate their attention on you instead of me.

At the pre-show reception, we joked and caught up. I told him my partner and I were expecting our first child in June. "You know, Brian," he interjected immediately, "'Howard' is a lovely name." I heard that he had conducted some interviews in Spanish recently--Howard was full of surprises. I asked him about it. "I'm very bold, Brian," he told me. "I do all sorts of things I shouldn't do. I can do an entire interview in Spanish without speaking any Spanish."

As Howard approached the stage at NYU, I wondered if he would tone down his remarks out of deference to his hosts. Not likely. He kept it short, but razor-sharp. Assessing the legacy of Dr. King, he said:

I don't think it would be hard to imagine what King would be saying to us today. I think he would be protesting the war policies and militarism of this administration, just as he protested the policies of the Johnson administration.

I think he would be demanding that the great wealth of this country not be used for war, and militarism, but...be used to give everybody the things that they need to enjoy life, including absolutely free health care for everybody. I think he would be demanding of the politicians--and asking us to demand of the politicians--not the puny reforms that we see bandied about in Congress, but fundamental change.

I was asked to say a few words of tribute for Howard at a Haiti solidarity event last week. I found out that in one of his last interviews, Howard had addressed the roots of the crisis. As a historian, you could always count on him to remember what others (especially in the media) have forgotten:

Haiti is one of the most shameful episodes in U.S. foreign policy, because Haiti is a neighbor (as is Cuba, where a similar relationship has persisted), and we have treated Haiti with cruelty all through our history.

When it became the first independent Black Republic in this hemisphere, defeating the Napoleonic army, the administration of Thomas Jefferson (ironically, author of our Declaration of Independence) refused to recognize it. And in the early 20th century, repeated Marine excursions to put down rebellions, and in 1916, the supposed "idealist" and proclaimer of "self-determination" Woodrow Wilson sent an occupation army, killing several thousand Haitians who would not accept our rule. The occupation lasted 18 years.

And since then...support of the Duvalier dictatorship. And hostility to Aristide, the first democratically elected president. And for some time now, strangling Haiti economically, and ruining its rice crop for the benefit of U.S. exporters. If we weren't spending hundreds of billions on stupid wars, we could have made much of Port-Au-Prince less vulnerable to natural disasters.

It turns out that many newspapers work on their obituaries ahead of time--of course, only for people of note, advanced in age. Howard, I'm told, got a phone call from the New York Times recently, asking for an interview for his obituary. "I'm glad to help," he told the reporter. "What's your deadline?"

Howard had a great, long life, a life worthy of emulation. If we can contribute a fraction of what he gave to the fight for social justice, then there's hope for our collective future.