Toufic Haddad, co-editor with Tikva Honig-Parnass of Between the Lines: Readings on Israel, the Palestinians, and the U.S. "War on Terror," describes the reaction of Palestinians to Barack Obama’s foreign policy speech in Cairo.

IT'S NO secret that Barack Obama's June 4 speech in Cairo was supposed to begin the mop-up job in U.S. foreign relations after the Bush regime's eight-year Middle East frat party. Iraq, Palestine, Lebanon, Syria, Sudan, Afghanistan and Pakistan have all experienced direct military aggression, including thousands killed and wounded by the U.S. or Israel, based upon explicit justifications linking them to the "global war on terror." Many others have experienced tumultuous blowback and threats.

But did his speech do the job? Was Obama effective in convincing Arabs and Muslims that he was dedicated to getting the stench of Pabst Blue Ribbon (and not a little blood) out of the oriental carpet?

Obama had an unprecedented opportunity to speak to millions of Arab and Muslim viewers thanks to the prevalence of Arabic satellite stations, which whipped anticipation of his speech to a feverous pitch in the days preceding it. And no doubt, it was the first time many listeners were so directly exposed (and largely impressed) by Obama's rhetorical eloquence. 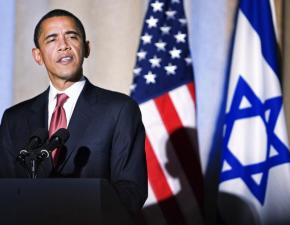 But Obama's communication style is also built on a great deal of what Henry Kissinger used to call "constructive ambiguity." The problem is, Kissinger was Secretary of State over 30 years ago, and this is 2009. It is precisely 30-plus years of supposed "ambiguity" in U.S. policy that has led to the contemporary bloodletting. Obama's words need to look good on the ground, not just on television, because a great number of people's lives depend on it.

Such is the case in Palestine, where I watched Obama's speech, to the background noise of Israeli fighter jets conducting aerial maneuvers over the West Bank. This omnipresent reminder of life under Israeli occupation, and the direct knowledge of its destructiveness, is the prism through which many Palestinian not only see Obama's speech, but also live it.

So how did the U.S. president do?

Obama had a strike against him in Palestine before actually coming to the plate, thanks to his performance during the Israeli war against Gaza. As he waited patiently in the wings for his January 20 inauguration, Israel was brutalizing Gaza with U.S. backing and weapons--an assault that killed more than 1,400 Palestinians and completely destroyed more than 4,200 homes. (Thirteen Israelis died--10 soldiers and three civilians--with no Israeli homes destroyed.)

It was then that the Obama team dropped the lame "there is only one president at a time" line--despite the then-president elect's freedom to critique Bush II policies on the tanking U.S. economy, and to express his mind on other foreign policy matters, such as the attack in Mumbai.

THAT ASIDE, Obama still failed to make amends in his Cairo speech when it came to addressing issues that affect Palestinian lives. Obama didn't start off well when he noted that America's bond with Israel is "strong" and "unbreakable." Really? So there is simply nothing Israel can do that would get the U.S. government to change its fundamental support? Forget the Arabs--if this is true, it's a worrying sign for U.S. democracy.

Second, Obama's justification for U.S. support of Israel was also based upon the experience of Jewish history in Europe, focusing particularly on anti-Semitism and the Holocaust--an issue Arabs had little to do with. Despite his eloquence, Palestinians have a difficult time being convinced by anyone that they should pay for intra-European racism.

But Obama tried to be even-handed by acknowledging that Palestinians had "suffered in pursuit of a homeland," "endured the pain of dislocation...wait[ing] in refugee camps in the West Bank, Gaza, and neighboring lands for a life of peace and security that they have never been able to lead."

While these words might appear sympathetic to a Western audience's ear, Palestinians hear them differently.

According to Obama, Palestinians are in "pursuit of a homeland," not their homeland--a subtle elision enough to raise fears among Palestinians that they might end up on a series of reservations called "a homeland," but which still isn't their homeland. His reference to the fact that Palestinians have "endured the pain of dislocation" also skirted around the question of how they were miraculously dislocated. How about "expelled by Zionist militias during Israel's creation and prevented from returning in contravention to U.N. General Assembly Resolution 194, passed over 110 times?"

Instead, Obama expects Palestinians to take comfort in the fact that he sees their situation as "intolerable," and that America will not turn its backs on "the legitimate Palestinian aspiration for dignity, opportunity and a state of their own."

Also sounds good, no? The problem is that it's dishonest. The U.S. has supported, funded and sanctioned this intolerable situation by arming Israeli military operations and protecting Israel in the UN with its Security Council veto. Is it too much to ask for an apology?

What about those "legitimate aspirations for dignity, opportunity, and a state," then? Lest we be "blind[ed] to the truth: the only resolution is for the aspirations of both sides to be met through two states, where Israelis and Palestinians each live in peace and security."

But this is actually the former U.S. government position. Ever since George W. Bush recognized the right to Palestinian statehood, the question has been upon the precise contours and arrangements of this state, not that such a state will be. Obama's net point pick-up here: zero.

THEN BEGAN the lecture on liberation: "Palestinians must abandon violence. Resistance through violence and killing is wrong and does not succeed." Really, Obama? Violence played no role in the success of liberation movements? Algeria? Vietnam? The great majority of post-colonial states in Africa and Asia, including Kenya?

The reference to the African American struggle was particularly delusional: "For centuries, Black people in America suffered the lash of the whip as slaves, and the humiliation of segregation. But it was not violence that won full and equal rights. It was a peaceful and determined insistence upon the ideals at the center of America's founding."

Correct me if I'm wrong, but didn't America fight a brutal Civil War to free southern slaves? Could the civil rights movement have done what it did without the determined (and violent) struggle of its predecessors, the abolitionists and the resistance of slaves themselves?

Obama attempted to assure that it's the principle that matters: "[V]iolence is a dead end...It is a sign of neither courage nor power to shoot rockets at sleeping children, or to blow up old women on a bus. That is not how moral authority is claimed; that is how it is surrendered."

Here, Obama the lawyer uses a classic bait and switch: the initial principle "Violence is a dead end" is equated with acts to terrorize and kill civilians. But does this represent all violence? Can violence ever be employed in a legitimate way to a positive end?

The UN thinks so when it acknowledges the right of occupied and colonized people to achieve self-determination. America apparently thinks so as well. Doesn't Obama talk about why more attacks on Afghanistan and Pakistan are necessary in another part of his speech? Kind of gives the shooting of rockets at sleeping children a new/old twist.

Obama's advice to the Palestinians: It's "time for Palestinians to focus on what they can build." The Palestinian Authority needs to "develop its capacity to govern, with institutions that serve the needs of its people." Hamas "must put an end to violence, recognize past agreements, and recognize Israel's right to exist."

What does this mean, though? It's no secret Obama is speaking about the need for the Palestinian Authority to get rid of its own corruption so it can be competent and respectable enough to be able to defeat Hamas, be it democratically, or possibly militarily.

Mind you, it's clear Obama is also talking to the "Palestinian Authority" associated with Mahmoud Abbass (Abu Mazen), not the democratically elected Palestinian Authority with a Hamas majority--led by Ismail Haniyeh in Gaza, and with dozens of its parliamentarians in Israeli jails. In Obama's world, though, Hamas is not the legitimate government that Palestinians voted for. It instead must "put an end to violence" (again, no acknowledgment of a right to resist), while recognizing "past agreements" and "Israel's right to exist."

Besides the fact that the latter are also Bush II demands, aren't these matters for a democratic government to decide? Every government can choose to abide by an agreement or not--ask an American Indian.

But if Obama still wants to apply pressure on another country's democratic decision, he still has to answer why it is incumbent upon an occupied people to acknowledge the right to exist of their colonial occupying masters? Also, since when is "right to exist" equated with right to exist in a form that discriminates against indigenous Palestinians because they are "non-Jews" living in the Jewish state?

Then came the juicy bone: "Israelis must acknowledge that just as Israel's right to exist cannot be denied, neither can Palestine's." The U.S. "does not accept the legitimacy of continued Israeli settlements," which "violates previous agreements and undermines efforts to achieve peace. It is time for these settlements to stop."

To be fair, it needs to be acknowledged that if actually transformed into policy, this demand does represent the one break from Bush II policies. But it is also fair to ask how relevant this is. It is already widely acknowledged that the existing Jewish settlements already carve up the West Bank into Swiss cheese. Without tackling these settlements, he's really only talking about how many holes are in the Swiss-cheese state, and not whether it is a Swiss-cheese state.

One last twist of Israel's arm: Israel must "ensure that Palestinians can live and work and develop their society," and "Israel must take concrete steps to enable such progress."

Obama's deafening silence regarding the devastation recently wrought upon Gaza is particularly noteworthy here. The war enraged the Arab and Muslim world from Jakarta to Casablanca. But what did Obama have to say about it? Zilch. Arab cynicism for Obama's "one president at a time" line is substantiated because he was silent then, and remains silent now.

THAT ABOUT wraps up the Palestinian scorecard in Cairo. Tune in next week for when these policies begin to fall apart.

While well-meaning folks in the West might feel that Obama deserves credit in his quest to find "a new beginning" to a violent and ugly relationship between the U.S and the Arab and Muslim people, they also need to realize that the latter's blood is still wet in the carpet.

And while it might be unfair to expect a sea change in policy from just one speech so early in his presidency, it is equally unfair to ask the historic victims of U.S. policies to put the past aside, especially when the crimes committed against them are so recent and omnipresent, and continue to go unacknowledged--like a frat boy's forgotten date rape victim, asked out on another date.

*Anyone notice that once Obama talked to the Arab and Muslim world, Obama's middle name "Hussein" resurfaced from its hibernation during his election campaign? This, at the same time, gives no justification to any racists or Islamophobes to disrespect the man for his middle name. The use of Hussein here is nonetheless justified because it is part of the image Obama was crafting and trying to sell to Arabs and Muslims in Cairo during his speech.

This article was written for The Faster Times, a new publication that will be launched at the end of June.