What do you think of Obama's 100 days? And what does the left need to do now to move the struggle forward? We asked a group of writers and activists for their answers to these questions. This commentary is from Haidar Eid, a professor, a resident of Gaza City, and a leading activist in the boycott, divestment and sanctions movement against Israel's apartheid.

I NEVER had high expectations for Barack Obama, because he still represents the Democratic Party, which is a part of the American establishment. Obama's victory in the presidential elections did not produce a change in the nature of American imperialism.

I think the difference between the Democrats and Republicans in the U.S. is similar to the difference between Likud and the Labor Party in Palestine. I thought, even prior to his taking office, that Obama's role would be to bring about a new fiction--or rather renew the of fiction--of a two-state solution in Palestine-Israel. That is, to breathe new life into the idea that one state for Jews and another state for Palestinians will bring peace to the region.

In essence, that isn't different from what George W. Bush and, before him, Bill Clinton stood for. The only difference that I see is that the Bush administration saw the annihilation of the Palestinian resistance as part of what Bush called the "war on terror." In his words, "You are either with us, or you are with the terrorists." 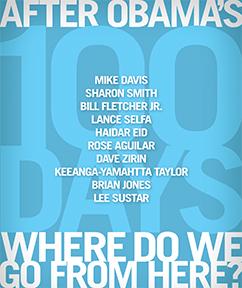 Because most of us belonging to Palestinian resistance and civil society organizations were not with George Bush, we were defined as terrorists--indeed, as all resistance to imperialism is throughout history.

The Bush administration enabled Israeli crimes in Palestine and Lebanon through financial, military and moral support. The first 100 days of Obama have witnessed the same thing. I don't see any difference, in fact, between what Israel is committing in Palestine, and in particular in the Gaza Strip, and what the American military has been doing in Iraq.

I would expect Barack Obama, for example, to immediately withdraw American troops from Iraq. We know that this is not going to happen. He made it very clear that he is going to keep some 50,000 troops in Iraq.

Although the Bush administration allowed Ehud Olmert, Tzipi Livni and Ehud Barak to undermine the Annapolis meeting by focusing only on Israeli security, the same thing is happening with Barack Obama and George Mitchell, his envoy to the Middle East.

The point of reference in any negotiations or any statements made by the American administration about the Israeli-Palestinian conflict is Israel's security. By doing that, Obama and his administration are effectively marginalizing the whole issue of Palestine, and unfortunately setting the stage for renewed Israeli assaults against a starving Gaza. Gaza has already been transformed into the largest concentration camp on Earth.

BARACK OBAMA visited one of the northern Israeli settlements in 2006, shortly before Israel attacked Lebanon and killed more than 1,200 people. Obama stayed for more than a week. Later, he made a visit to Ramallah, where he spent just 45 minutes with Palestinian Authority President Mahmoud Abbas--afterward, he refused to attend a press conference with Abbas.

The Obama administration, including George Mitchell, are filled with nothing but empty rhetoric when it comes to addressing the illegal settlements policy of Israel in the West Bank. They know very well that Olmert, after the Annapolis meeting, immediately authorized a massive building program for new Jewish housing units in eastern Jerusalem and the expansion of other settlements in the West Bank.

This is a violation, of course, of the letter and the spirit of the so-called two-state solution, which I personally call the two-prison solution.

What we need from Obama is to show seriousness in dealing with the newly elected Israeli government, which is a fascist government and which proves that Israeli society by and large is lurching ever further rightward. It is what Israeli professor Israel Shahak has referred to as the Nazification of Israeli society.

Obama needs to adopt the same attitude toward Israel that the U.S. administration adopted toward apartheid South Africa at the end of the 1980s. In spite of the massacres, the war crimes and the crimes against humanity that have been committed in the Gaza Strip, there has been no serious condemnation of Israel issued from the White House.

On April 17, there was an incident in Bil'in, in which a Palestinian youngster was shot dead. On the same day, another Palestinian was shot dead in Hebron. That was at the same time Mitchell was visiting Tel Aviv.

But unfortunately, the complicit silence from Obama's White House continues. This has accompanied the cutoff of medicine, food and fuel to a starving Gaza. Patients in need of dialysis and other urgent medical treatment are dying every single day. A majority of us here in Gaza are badly undernourished. But not a single word of condemnation from the Obama administration.

Every single person who is a little bit familiar with Middle East issues must realize now--and Barack Obama seems to be a smart guy--how cynical it is to wait until a two-state solution has been rendered impossible by Israeli colonization of the West Bank, by the looting and pillaging of Gaza, by the construction of the apartheid wall, and by the expansion of so-called Greater Jerusalem to say the time has come for peace.

Like every U.S. president since 1967, Obama has supported and is still supporting Israel in creating conditions that made the two-state solution impossible, impractical and unjust.

If Obama hopes to gain any credibility as a peacemaker, he needs to reverse the policies of George Bush and strongly oppose the policies of the fascist Israeli government of Benjamin Netanyahu and Avigdor Lieberman.

He should take the lead of Venezuelan President Huge Chavez, with whom he shook hands in Trinidad. Venezuela and Bolivia both severed diplomatic ties with Israel after its assault on Gaza earlier this year. But so far, these first 100 days have been a great disappointment to us Palestinians.

THE WAY civil society organizations in the U.S. opposed apartheid South Africa and pressured their own government to sever its diplomatic with South Africa is the model that the U.S. left should now pursue with respect to Israel. Join hands with us in besieged Gaza and demand the immediate withdrawal of Israeli occupation forces from Gaza and the West Bank.

We must also demand that Israel abide by international humanitarian and human rights law, and refrain from imposing collective punishment on Palestinian civilians, as per numerous covenants of international law and United Nations resolutions.

We should demand that Israel release all detained Palestinian ministers, legislators and political prisoners. There are more than 12,000 Palestinian political prisoners. Because of the mainstream media coverage, I know that every single American knows the name of the captured Israeli soldier Gilad Shalit, but I don't think many know the name of a single Palestinian prisoner among the thousands--which, by the way, includes hundreds of women and children.

We should demand the implementation of the advisory opinion of the International Court of Justice (ICJ) on Israel's apartheid wall--to cease building it and make reparations for any damage caused during its construction. We should also demand that the United Nations insure that Israel fulfills its obligations in terms of international law.

After the experience of the genocidal war against the civilians of Gaza, in which more than 1,500 Palestinians were killed, 90 percent of whom were civilians, including 443 children and 120 women, we need an international protection of Palestinian civilians in the Gaza Strip and West Bank.

This is an urgent task. We cannot wait. Every single day, we hear of people dying. Just yesterday, my own cousin, who is 42 years old and has been suffering from leukemia, was not given a permit for an Israeli, Egyptian or Jordanian hospital. She passed away yesterday, leaving seven children.

It is time for the American left to demand that Israeli generals, Israeli officers and Israeli soldiers be indicted for war crimes before the ICJ, for using phosphorous bombs against civilians and for other atrocities.

If Barack Obama wants to show his liberal world view and understanding of racism, I think he should sympathize with the suffering of Palestinians. He must realize it is time for us to have civic democracy in historic Palestine after the return of more than 6 million Palestinian refugees living in the diaspora in miserable conditions.

The kind of strategy and tactics used by the American left during 1970s and '80s against apartheid South Africa are essential for pushing for these demands. Our allies are all oppressed people in the U.S. and around the world. When it comes to the U.S., this is a society that has suffered racism in the 20th century, that has many marginalized groups, but that is also multiethnic and multicultural.

The same tools that were used in the 1950s, '60s and '70s in order to obtain rights for the African American community in the U.S. should be used to support the Palestinian cause. We need to approach churches, mosques and other kinds of associations to promote a culture of resistance.

We should demand the economic, political and cultural isolation of Israel. I know that this won't happen immediately--exactly like in the case of white South Africans, who were welcomed in the U.S. for a long time. But through an international movement, they were eventually ostracized, especially in the realms of sports and culture.

Israel needs to feel that it is paying a price for its war crimes against Palestinians, especially during the Gaza massacre. The American left needs to understand this, to start changing its understanding of the Israeli-Palestinian conflict--from a conflict over territory and Palestinian independence to a conflict about Palestinian liberation.

That is why the American left should adopt as its platform support for the one-state solution, support for equal rights and support for making Israel/Palestine into a state for all its citizens. The two-state solution means racism--the Bantustanization of Palestine.

This currently does not constitute a fundamental part of discourse on the American left. But this is essential for the transformation of Israel into a state for all of its citizens, regardless of race and religion.

How much has really changed?

Blank check for the bankers