What’s in store in the Obama era?

U.S. politics is taking a new shape after a long period of conservative dominance.

WITH THE media focused on the pomp and circumstance of Barack Obama's ascent to the White House, it was easy to lose sight of the deeper significance of his election.

Not only is the inauguration of the first African American president historic in its own right, but Obama's election signifies the arrival of a new era in American mainstream politics.

Although only two and a half months have passed since Election Night and the jubilant multiracial celebrations in cities across the country, it's worth restating the breadth and depth of the victory.

The Obama-Biden ticket defeated the Republican McCain-Palin ticket by more than 7 percentage points (52.9 percent to 45.6 percent) and nearly 10 million votes (69.5 million to 59.9). Obama became the first Democrat since Jimmy Carter, and only the second since Franklin Roosevelt to win an outright majority in a presidential election.

The Democrats won states like Indiana, North Carolina and Virginia that have been solidly Republican for most of the last generation. At the same time, Obama will have the largest Democratic majority in the House of Representatives since 1992 and the largest majority in the Senate since 1977.

Lance Selfa is the author of The Democrats: A Critical History, a socialist analysis of the Democratic Party, and editor of The Struggle for Palestine, a collection of essays by leading solidarity activists. He is on the editorial board of the International Socialist Review.

This win put a final end to an era of conservative dominance that goes back more than a generation.

The emergence of the Republicans in the late 1960s as the main governing party, at least in the White House, hinged on the "Southern strategy" of coded racist appeals that made the post-civil rights movement South the main base for the GOP.

This political appeal to opponents of the social change associated with the 1960s and 1970s merged with a revived free-market ideology challenging the Keynesian economic consensus to become the reigning orthodoxy of the last four decades.

Perhaps there is no greater repudiation of "Southern strategy" politics than the election of first African American president. Although exit polls showed that McCain still won a majority of white voters, Obama did better than any Democratic presidential candidate since Carter.

As public opinion expert Andrew Kohout explained, "[R]ace was certainly a factor in the vote, but on balance more of a positive than a negative for Obama. Black turnout (13 percent of the electorate) was considerably higher than it was in 2004 (11 percent). That 20 percent increase in Black turnout is attributable to first-time voters. 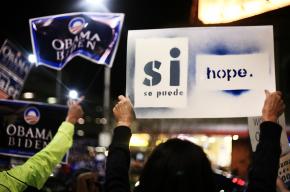 "Overall, 19 percent of African American voters were first-time voters, compared with 8 percent of white voters who went to the polls for the first time. The increased turnout combined with near-universal support for Obama among Black voters alone was responsible for adding a couple of percentage points to his overall popular vote."

At the same time, the idea that "big government" is the problem, rather than part of a solution to the current crisis, has also fallen by the wayside. Exit polls showed that 51 percent of voters said they wanted government "to do more" rather than less, and 76 percent of that group voted for Obama.

IT'S IMPORTANT to understand that this "new era" isn't just based on demographic shifts or short-term tactics pursued by the different parties. The fact that it occurs during the worst economic crisis since Great Depression means that it has the potential to open up politics on a whole range of questions.

For millions who are losing their jobs, their homes, their retirement savings and more, the crisis of the economic system has already undermined the mantra of deregulation, tax cuts, free trade and marketization of everything that accompanied neoliberal dogma of the last generation.

As he takes office, Obama has the advantage of widespread popularity. During the election, the Pew Center recorded its highest-ever reading of the percentage of voters voting "for" a candidate (that is, in contrast to the number voting "against" the other candidate).

And if anything, the sense of anticipation and hope in Obama has only increased since November. On the eve of his inauguration, Obama's popularity approached 80 percent, far outstripping similar numbers for the last two presidents.

While having the backing of the majority of the public, Obama also has significant support within the U.S. ruling class to enact a program that will stave off the economic crisis. The Wall Street Journal's Gerald F. Seib observed: "One thing is certain: Traditional thinking about relations between a Democratic administration and the business community needs to be thrown out. This is a new era."

American business largely supports Obama's proposed stimulus package, and significant players in the financial industry back Obama's calls for re-regulation of financial markets. For a good part of 2009, Obama should also have a "honeymoon" with the public.

At the beginning of his term, the Republicans and the right appear to be flailing, unsure of how to confront the new era and respond to the widespread public repudiation they have suffered. Nevertheless, they will try to put up an opposition to Obama's plans, characterizing them as "big-government" liberal schemes--though given business' support for Obama's stimulus, this conservative objection may not gain much traction.

On the other hand, business and the Republicans have announced full-out opposition to the Employee Free Choice Act (EFCA), legislation that would make it easier for workers to join unions. And they may look to weaken or scuttle Obama's plans for health care reform.

As this opposition arises, it will put Obama and the Democrats to the test. Will they take advantage of the expectations their election raised to marginalize the GOP? Or, in the service of "bipartisanship"--or a recognition of the overwhelming Democratic advantage in campaign contributions from business in 2008--will Obama make concessions to the conservatives?

Already, Obama's stimulus plan has been larded with billions in tax cuts for business, and congressional Democrats are moving toward delaying the introduction of EFCA.

OBAMA HAS the biggest opportunity since Ronald Reagan's presidency to reset American politics and policy for a generation. But as a creature of the U.S. political establishment, he remains deferential to conventional wisdom and its many purveyors in Washington and academia.

Because of the dire economic situation that Obama is inheriting, it is unlikely that his administration will be a rerun of the budget-balancing, small-thinking Clinton administration of the 1990s--despite the presence of Clinton retreads in Obama's Cabinet and among his chief advisers.

But the tension between new possibilities and old assumptions will mean that there will be many opportunities for the "change" that Obama promised to be derailed--and for his supporters to be disillusioned.

Unlike the Democratic victory in the 2006 congressional elections, when the overwhelming issue was the failing and unpopular war in Iraq, Obama and the Democrats owe their election in 2008 much more to the failing economy.

This doesn't mean that voters are indifferent to the wars in Iraq and Afghanistan. It means that the public's chief concern is domestic, and that they expect Obama to address the economy--in other words, to be a "domestic" president.

On foreign policy, Obama is likely to make some changes that will garner him support among antiwar forces and internationally--for example, closing the Guantánamo prison camp and pulling back some troops from Iraq. He is also likely to implement more stylistic changes, such as talking more about diplomacy and human rights, rather than forcing every foreign policy issue through the lens of the "war on terror."

But these changes will be coupled with a ramping-up of the war in Afghanistan--which has the potential of becoming a disaster that could overwhelm his domestic agenda--and a more aggressive stance towards Pakistan. Despite lip service to the "peace process," his policy on Palestine will not depart from the standard right-wing approach of 100 percent support for Israel.

Meanwhile, the Democrats and liberals' compromised position vis-à-vis big business means there will be definite limits to how far they will go to fight for health care or labor law reform. And they are unlikely to challenge the main planks of Obama's foreign policy.

So it will be up to people who want to see more far-reaching change to organize--to push from below to achieve it.

Struggle is the key. The examples of the recent Republic Windows & Doors factory occupation and the same-sex marriage mobilizations show the potential to organize ordinary people to press for change. But they, and struggles like them, will have to be built on, organized and politicized over a longer term.

That's the challenge for the opening years of this new era.