The image and the reality of change

The higher someone rises in the U.S. political system, the more likely they are to abandon ideals and principles when it becomes politically inconvenient or "unrealistic."

IT LOOKS like we might have a Black president. If the superdelegate and media chorus is any indication, Barack Obama will be the nominee of the Democratic Party.

Millions who have grown to hate Bush and his neocon crew will relish seeing him replaced by a liberal senator. More importantly, in the country that was founded on slavery, the land of Jim Crow, of "colored" drinking fountains, of minstrel shows and lynch mobs, the image of a Black man holding the nation's highest office can't help but stir even the most cynical heart.

From the right, Obama will no doubt be hailed as "proof" that America is a post-racist society--that those who insist on talking about racism just need to "get over it," and so on. Get ready for a deluge of "I told ya so's" from the persistent enemies of affirmative action.

However, while the seating of a son of Africa on America's highest throne will show that the American population has become more progressive, it won't mean the end of racism and systematic discrimination.

Brian Jones is a teacher, actor and activist in New York City. He is featured in the new film The Inconvenient Truth Behind Waiting for Superman, and his commentary and writing has appeared on MSNBC.com, the Huffington Post, GritTV and the International Socialist Review. Jones has also lent his voice to several audiobooks, including Howard Zinn's one-man play Marx in Soho, Wallace Shawn's Essays and Noam Chomsky's Hopes and Prospects.

FROM THE perspective of the left, will President Obama be a force for change? "Don't hate the player," some will say in his defense, "hate the game." (Of course, that's often the excuse of "players" who, deep down, love the game.)

There are well-meaning people who go into government because they want to bring some kind of change. The catch is that the higher you rise in our political system, the more you face a choice between abandoning progressive ideals and political marginalization.

Obama often talks about his days as a community organizer on the South Side of Chicago. This is a huge part of his appeal--people see him as someone who has a commitment to working for ordinary folk, as someone who hates the "game." But Obama, campaigning for office, plays the game expertly; he was willing to drop ideals when they became politically inconvenient.

Obama-the-organizer was considered an ally of the Palestinian community, for example. Obama-the-rising-politician increasingly was not. As the Chicago-based Arab-American activist Ali Abuminah told the New York Times, "He has a pattern of forming relationships with various communities and as he takes his next step up, kind of distancing himself from them and then positioning himself as the bridge." 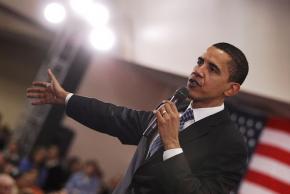 When he kicked another former ally--his own pastor--to the curb, one Harlem resident told me in frustration, "If he's against Rev. Wright, what's the point of having him be the president? He'll be just another Black face in a high place." Then he paused, and added, "But I still hope he wins."

This man is not alone. The best thing about the "Obama phenomenon" has been its impact on expectations. They have been systematically lowered for so long that any shift in the other direction is welcome.

But this always held great danger for Obama's wealthy supporters--that his message of "hope" and "change" would raise too much hope of radical change. In February, the Economist magazine worried out loud that:

the Obama phenomenon would not always be helpful, because it would raise expectations to undue heights. Budgets do not magically cut themselves, even if both parties are in awe of the president; the Middle East will not heal, just because a president's second name is Hussein. Choices will have to be made--and foes created even when there is no intention to do so.

Indeed, choices will have to be made, and Obama would not have gotten this far without already making many of them. Obama will side with Israel in its brutal occupation of Palestine; he will pull some of the troops out of Iraq, but retain U.S. dominance in the Middle East; he will preserve the role of profit-driven private insurance companies in our bloated, profit-driven health care system.

Tragically, the nature of the political machine has virtually guaranteed that the rise of Black faces to high places did not lead to a similar rise for those in low places. Consequently, by almost any measure--wages, health care, housing, even life expectancy--the lives of African-Americans families continue to trail behind their white counterparts.

Obama wouldn't be the first of the "firsts" to turn his back on the Black movement. Rather than use their positions as movement vehicles, at best, Black Democrats have wielded their power to contain our movements within "reasonable" limits. At worst, they actively suppress them.

For the famous 1963 March on Washington, then-student activist John Lewis wrote a radical speech about how both the Democratic and Republican Parties had betrayed the American people, and called for the formation of a third party. But no longer. Today, he is not only a Democratic Party politician; he is a super-delegate.

The first Black mayor of Philadelphia, Wilson Goode, irritated by a local Black nationalist group, literally dropped a bomb on their headquarters. Eleven Black people perished in the flames.

Like Obama, these politicians owed their swivel chairs to the Black struggle (and, frankly, the Black radicals). And like Obama, they answer to a different set of priorities once seated.

THIS ISN'T a question of Black politicians becoming "puppets" or even "selling out." If so, it would simply be a matter of personal failure. Would that were the case! If it were, we would only need to find some Black politicians with real backbone and get them elected.

As Karl Marx put it: "The executive of the modern state is but a committee for managing the common affairs of the whole bourgeoisie." And since the 1970s, the suppression of Black radicalism and the demands of working people in general have been crucial pillars of the "common affairs" of the American elite. Naturally, anyone (white or Black) seeking higher office would be expected to "manage" those affairs. Fighting for our common affairs simply isn't their job.

For years, we labored under the assumption, quite understandably, that our problem was the levers of power were pulled by white hands. The civil rights movement, rightly, fought for diversity at all levels of society, including at the top. But many of its activists quickly saw that little was different when Black hands controlled the same levers. Police brutality, segregated housing, unequal education--all persisted in American cities under the leadership of white and black mayors.

Dr. King, among others, came to see that the levers themselves were the problem. "The roots" of the problem, King argued, "are in the system rather than in men or faulty operations." Or, as he more bluntly admitted to his aides, "something is wrong with capitalism."

But this is not a cry for despair. We can--and must--fight to change this system. In the meantime, our movements need to remain independent of the Republicans and Democrats, so that we can hold their feet to our fire.

Instead, and too often, our movements are held hostage to the priorities of Democratic Party politicians advertising themselves as a necessary "bridge" to power. Rev. Al Sharpton admitted that he postponed organizing civil disobedience after Sean Bell's murderers were acquitted because he didn't want to interfere with the May 6 presidential primaries.

Waiting an extra week no doubt meant a smaller turnout to the protests and a weaker movement. But not waiting would have put Obama on the hot seat, and Rev. Sharpton, like Rev. Wright, might have been thrown under the bus.

Ironically, it was candidate Obama who made this very point--about the need for an independent movement--so eloquently in the Democrats' debate in South Carolina. When Wolf Blitzer asked the candidates why Dr. King, were he alive today, should endorse their respective campaigns, Obama responded:

Well, I don't think Dr. King would endorse any of us. I think what he would call upon the American people to do is to hold us accountable, and this goes to the core differences, I think, in this campaign.

I believe change does not happen from the top down. It happens from the bottom up. Dr. King understood that. It was those women who were willing to walk instead of ride the bus, union workers who are willing to take on violence and intimidation to get the right to organize. It was women who decided, "I'm as smart as my husband. I'd better get the right to vote."... Arguing, mobilizing, agitating and ultimately forcing elected officials to be accountable--I think that's the key.

Fine words. While cheering Bush's exit, we should remember them.