The two parties come together for the banks

Samuel Falcone-Coffin and Dylan DelGiudice report on a Senate vote to reverse measures passed in 2010 to prevent banks from leading us all into another collapse.

HEEDING THE call one of Donald Trump's early executive orders, the Senate voted on March 14 to roll back many sections of the 2010 Dodd-Frank Wall Street Reform and Consumer Protection Act.

The most notable measure one would raise the threshold of assets--from $50 billion to $250 billion--for a bank to be labeled "too big to fail" and therefore subject to Dodd-Frank oversight.

At a time when Congress is infamous for partisan gridlock, these measures to help bankers were a triumph of bipartisanship.

Senate Banking Committee Chairman Mike Crapo, an Idaho Republican, got the support of 17 Democrats--over one-third of party members in the Senate--to join Republicans in cutting some of the only meager reforms on the financial sector created in the wake of the Great Recession a decade ago.

This sellout by her Democratic colleagues prompted Massachusetts Sen. Elizabeth Warren to declare, "Republicans and Democrats [have] locked arms to do the bidding of the big banks." Warren rightly argued on the floor of the Senate that deregulation of the financial sector recreates the conditions that led to the Great Recession and "sets the stage for another financial crash." 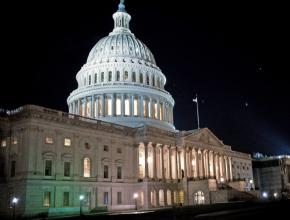 DODD-FRANK was drafted in the wake of the worst economic crisis since the Great Depression. The Obama administration and Democrats in Congress proposed the legislation to place new regulations on Wall Street, increase economic transparency and provide measures to protect consumers, with the overall intention of stabilizing the market economy.

In calling for new banking legislation in June 2009, Obama demanded a "sweeping overhaul of the United States financial regulatory system, a transformation on a scale not seen since the reforms that followed the Great Depression."

When it finally materialized, however, Dodd-Frank provided some modest reforms to the off-the-rails financial sector, as Christopher Baum explained at SocialistWorker.org last year.

First, Dodd-Frank consolidated federal economic regulatory agencies and instituted a new oversight council to evaluate systemic macroeconomic risk. It also increased public transparency in the financial sector, most notably by bringing derivatives (a speculative commodity based on the value of another entity) into public exchanges.

The legislation increased protection for consumers by creating the Consumer Financial Protection Bureau (CFPB) to regulate financing options by a variety of means, while providing measures to more strictly regulate credit rating agencies.

Dodd-Frank also included the so-called "Volcker Rule," which banned banks from "proprietary trading"--trading and investing for the firm's own gain, using the firm's own capital--and owning hedge funds. The Volcker Rule also limited the liabilities, financial debt or obligations that a bank could hold.

The Dodd-Frank reforms were--in stark contrast to Obama's grandiose call--meager in comparison to the New Deal measures passed in the 1930s, when Franklin Roosevelt felt compelled to press for far-reaching measures to regulate the financial sector amid the Great Depression.

The 2008 financial crisis was the sharpest since the 1930s, and by the time it hit, the New Deal banking reforms had been hollowed out--with Democrats playing the leading role every bit as much as Republicans.

The U.S. Banking Act of 1933, commonly referred to as the Glass-Steagall Act, separated commercial and investment banking, based on an understanding that banks which grew to a certain size would cause catastrophic damage if they failed. Glass-Steagall banned commercial banks from investing for themselves, functionally dividing the financial sector into two.

More than 60 years later, under the leadership of Democratic President Bill Clinton, Glass-Steagall was repealed and replaced in 1999 by the Gramm-Leach-Bliley Act, (GLBA) in an effort to "modernize" the financial industry. Clinton famously proclaimed that the more stringent regulations of the New Deal era were "no longer appropriate."

GLBA required banks to disclose information-sharing practices to customers, but didn't prohibit this. In fact, Glass-Steagall was already being eroded by the Clinton administration--which in 1998 gave the conglomerate Citigroup a waiver from Glass-Steagall to start taking on securities. Other waivers soon followed.

The repeal of Glass-Steagall enabled banks to become larger and more intertwined, leading to the "too big to fail" disaster that necessitated a massive taxpayer bailout of the financial sector after the 2008 crisis.

According to economists like Joseph Stiglitz and Robert Reich, Glass-Steagall could have helped prevented this disaster because "shadow banks" like Lehman Brothers and Bear Stearns wouldn't have had their risky investments underwritten by major, large banks.

NOW, IN 2018, supporters of rolling back Dodd-Frank include Sens. Doug Jones of Alabama and Claire McCaskill of Missouri, ">who famously criticized Bernie Sanders for identifying as a socialist--and both Senators from Delaware, home to half of the credit card industry.

Many of the "moderate" Democrats who voted for the rollbacks, like McCaskill, Heidi Heitkamp of North Dakota and Jon Tester of Montana, are from "red" states. Though they largely supported Dodd-Frank when it was passed in 2010, they now argue that modifications are necessary to provide relief for medium-sized lenders, described as "community banks."

These banks, which have up to $250 billion in assets, aren't exactly mom-and-pop outfits. Many, though, are located in rural (and often conservative) areas.

The efforts of Democrats to pander to regional banks--and the decision of the national party leaders to not pressure them to take a harder line--reflects the continuation of the party's failed strategy of bipartisan collaboration in the interest of banks, rather than pro-working class politics that challenge austerity.

But this isn't a matter of bad strategy. The problem isn't that the Democrats don't know what they're doing, but that they do.

When the country teetered on the brink of disastrous economic collapses--as in the case of the Great Depression and the Great Recession--Democrats pushed financial reforms to save capitalism from itself.

But once the crisis passed, the Democrats joined in with Republicans to chip away at reforms like Glass-Steagall and Dodd-Frank, in the process laying the basis for future crises.

The rollbacks of Dodd-Frank are currently being considered in the House, where Republicans are debating among themselves over whether to add even more reactionary provisions.

We can only hope that they somehow manage to block themselves from passing the bill. But this much is clear: We can't rely on either Republicans or Democrats to fight for the interests of working people over the interests of bankers.