On the wrong side of the law

WHEN THE lid was lifted off the NFL's cover-up of a violent assault by star running back Ray Rice--who was caught on videotape knocking his partner unconscious in a hotel elevator--it opened the door to a serious discussion about domestic violence.

Commissioner Roger Goodell was exposed over the NFL's willingness to set aside the safety of women in the interest of protecting a highly lucrative business.

And we know the violence went beyond this one incident. In an interview on Democracy Now!, Dewan Smith-Williams, the wife of former NFL player Wally Williams, described the "code of silence" followed by many of her friends whose husbands played football. She described locking herself in a closet during one violent episode and calling the National Football League Players Association liaison for help. The call was never returned.

There have been some important statements made about sexism and domestic violence, including CBS sports anchor James Brown's words during a national pregame broadcast: "This problem is bigger than football." 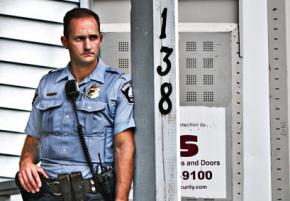 And there have been some horrible ones. Like the victim-blaming that took place after Janay Rice appeared in a press conference beside Ray Rice, who is now her husband. Commentators asked repeatedly, "Why didn't she just leave?"--as if on cue trying to shift the blame onto the woman who was beaten. In a gross exchange on "Fox and Friends," the hosts concluded that the beating must not have been that serious, joking, "I think the message is: take the stairs."

Writer Beverly Gooden decided to change this conversation by starting the hashtag #WhyIStayed, which immediately caught on and began providing a platform for women's real-life experiences with domestic abuse and partner assault. It also showed the real obstacles women face in dealing with an abusive situation. Here are a couple of the messages:

I had 3 kids under 8, no job or experience. I had nowhere to go. I stayed because I thought I could protect us all. I couldn't. ‪#WhyIStayed‬

I also felt societal pressure to stick it out. The way I grew up, you married for life. ‪#WhyIStayed‬

The responses to the #WhyIStayed campaign demand a real discussion--one that must include the lack of resources available to women who face domestic violence, which forces them to continue living in abusive relationships.

Another important part of this picture is the complete failure of institutions that claim to protect women--above all, law enforcement. For many women--poor and working-class African American women in particular--law enforcement is part of the problem, not the solution to domestic violence.

The reality is that the laws that supposedly address violence against women--and the institutions that enforce those laws--don't serve all people equally. They are steeped in the same sexism and racism that is woven into the fabric of U.S. society. If a discussion has begun about why the partners of NFL players aren't finding justice, it's a good time to start talking about how working-class and poor women of color are treated when they face domestic violence.

HERE ARE a few statistics: As of 2007, Black women were four times more likely than white women to be murdered by a boyfriend or girlfriend, according to the Bureau of Justice Statistics. But these women were less likely to use social services or battered women's programs, or go to the hospital because of domestic violence.

These numbers aren't surprising when you look at what happens when working-class and poor women try to seek help in situations of domestic violence. According to Beth Richie, author of Arrested Justice: Black Women, Violence and America's Prison Nation, Black women who report violence are more likely to have police and other uniformed agents arrive at the their home, adding stress to the situation--including the threat of their children being taken from them--rather than reducing it.

In cases where police get called, the cops can be more dangerous than the original abuse. When the Chicago police were called to the home of Tiawanda Moore and her boyfriend after they were fighting, the police separated the couple to interview them. During his interview alone with Moore, one officer fondled her and then gave her his phone number.

When Moore attempted to file a sexual harassment complaint about the incident, police aggressively discouraged her from doing so--so she began recording the conversations. When the cops learned about that, she was arrested, charged with violating an anti-eavesdropping law, and put in jail. It was only due to activists' pressure and public attention that Moore was finally freed and the charges dropped.

The case of Marissa Alexander is another example of how the U.S. criminal justice system punishes the victims. When Alexander's husband attacked her and threatened to kill her, she tried to run away but couldn't. She saw no alternative but to fire a warning shot, which hit a wall in her kitchen, injuring no one.

When police arrived, it was Alexander who was arrested.

Alexander pled self-defense and tried to use the "Stand Your Ground" law later used by white vigilante George Zimmerman to try to escape charges in the killing of Trayvon Martin. Her "Stand Your Ground" defense was rejected--Alexander was convicted and sentenced to 20 years in prison. Like Tiawanda Moore, if it weren't for a public outcry about that drew attention to her case, Alexander would still be behind bars--she was released on bail, though still faces the threat of a retrial.

THE CALCULUS should be clear to anyone: Contact with police = more harassment and violence + the threat of arrest and jail. And yet law enforcement is the thread that runs through most anti-violence policy in the U.S.

In her book, Beth Richie says that legislation like the 1994 Violence Against Women Act (VAWA), though it was hailed by many women's rights organization, has to be viewed in the context of the entire Violence Crime Control and Law Enforcement Act--the broader package of anti-crime legislation it was a part of.

In keeping with its all-around mean-spirited character, the 1994 law eliminated the chance for lower-income prison inmates to receive college educations during their term of confinement--with a provision that overturned a section of the Higher Education Act of 1965 allowing inmates to receive Pell Grants in prison.

And while some sections of the VAWA provided long-needed funding for battered women's shelters and other initiatives, this part of the legislation also stressed policing and criminalization, like the over all anti-crime law.

Aside from the immediate impact, Richie points out that the enormous expansion of law enforcement and prison budgets had a profound effect on poor and working-class Black neighborhoods--where a number of the women most vulnerable to domestic abuse lived and worked.

Add in a "war on drugs" hysteria that was criminalizing record numbers of African Americans, and it was more likely than ever that women victimized by violence would now be criminalized themselves. This is especially true of women who don't "fit" in the "mainstream"--poor women, lesbians, public housing residents. As Richie writes:

[I]f she is a prostitute, an active substance abuser, a woman who lost custody of her children because of neglect, an undocumented immigrant or simply a woman who has learned that the state will not protect her, she is even less likely to be served by the criminal legal system's very general response to male violence. Indeed, they are not "real women."

Women activists of color who supported the VAWA admit that the heavy policing aspect--which has sometime meant that survivors of sexual assault and domestic violence are the ones arrested--was always a concern. But they felt they needed to compromise in order to fulfill the aspects of the act that increased funding for other resources, like transitional housing.

Loretta Ross, director of the Women of Color Reproductive Justice Collective, told Colorlines on the 20th anniversary of VAWA that women of color are "not being perceived as victims. They are perceived as violent or as the primary aggressor in a situation." She said she tried to get around this: "I used to run a support group for African American survivors where I was able to have women who'd been arrested [when] it was clear that she'd experienced violence."

All of this underlines the grossly inadequate choices available to poor and working-class African American women under the current system. Many, fearing the consequences of what seeking "help" might mean, decide instead to make do in dangerous living situations.

As it is currently organized, the criminal justice system doesn't protect the vulnerable in our society. It punishes them. The solution is taking police and criminalization out of the equation--and replacing them with funding for the programs that women need to leave battering situations.

Living-wage jobs, subsidized child care and free health care would go a long way to making sure no one ever has to risk a dangerous living situation in order to survive.