The media assassination of Trayvon

Nicole Colson reports on the outrageous attempts by some in the media to suggest that murdered Black teenager Trayvon Martin may have "had it coming."

"THEY'VE KILLED my son. Now they want to kill his reputation."

That was how Sybrina Fulton, the mother of Trayvon Martin, responded this week to a sudden flood of news reports and commentaries that--incredibly enough--attempted to smear the memory of her dead son.

Anyone with any compassion or sanity had to ask: What kind of person could read the reports of Trayvon's death and somehow conclude--or even entertain the idea--that the unarmed 17-year-old might have "had it coming"?

The answer, unfortunately, is "too many"--from outright racists to members of the media and politicians.

First, there were the reports that tried to portray Trayvon's killer--George Zimmerman, the neighborhood watch volunteer who first stalked and then shot the Skittles-carrying teen--in a positive light. An Orlando Sentinel report, for example, relying on anonymous and police sources, began this way:

With a single punch, Trayvon Martin decked the Neighborhood Watch volunteer who eventually shot and killed the unarmed 17-year-old, then Trayvon climbed on top of George Zimmerman and slammed his head into the sidewalk, leaving him bloody and battered, law-enforcement authorities told the Orlando Sentinel.

That is the account Zimmerman gave police, and much of it has been corroborated by witnesses, authorities say. 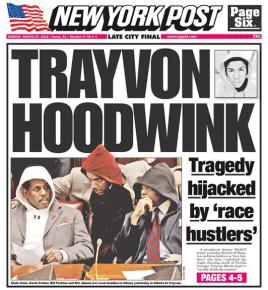 Which authorities exactly? The same ones who failed to arrest Zimmerman in the first place? And who have subsequently become symbols of a racist injustice system because of their negligence?

And which witnesses? Certainly not the ones who told CBS News "that police who interviewed them 'corrected' their testimony, with officers telling the witnesses that it was Zimmerman, not Martin, who was being attacked and crying out for help."

Most people would figure the word of those "authorities" and "witnesses," if they exist, shouldn't count for much these days. But not the Sentinel, which went on to proclaim that Trayvon had been visiting his father's fiancée in Sanford because "[h]e had been suspended from school in Miami after being found with an empty marijuana baggie. Miami schools have a zero-tolerance policy for drug possession."

The Sentinel didn't bother explaining how having an "empty marijuana baggie" would lead to suspension for "drug possession" (don't you need to possess drugs to be guilty of drug possession?). Nor did the paper explain how it determined the purpose of the alleged empty baggie.

But if the Sentinel had bothered to investigate, one of its reporters would have found national data showing that Black students--especially Black male youth, face much higher suspension rates in public schools across the U.S. than do white students.

According to a report in the New York Times earlier this month:

One in five Black boys and more than one in 10 Black girls received an out-of-school suspension. Overall, black students were three-and-a-half times as likely to be suspended or expelled than their white peers.

There are two possible explanations for this. One is that Black students commit three-and-a-half times more "suspendable" offenses than white students. That's the explanation the Sentinel would have you believe.

But the real explanation is that such statistics are the product of a racist society--in which Black children, teens and adults are the victims of systematic inequality, and targeted for violence by a criminal injustice system that treats them far more harshly than whites.

SUCH DISPARITIES are especially prevalent when it comes to America's "drug war." Statistics show that Blacks and whites use drugs in roughly the same proportion as their percentage in the population. But while Blacks account for approximately 14 percent of drug users, they constitute 35 percent of all arrests for drug possession, 55 percent of all convictions on those charges, and 74 percent of those sentenced to serve time in prison possession.

Even setting aside such vast inequalities and the racism of a "justice" system that unfairly targets people of color, we should ask: What does it matter if Trayvon Martin had been suspended from school for drug possession? How, on earth, could it be relevant?

Since when did having pot become a justification for the execution of an unarmed Black teenager?

The answer, of course, is that it's not a justification--unless you happen to be trying to justify the actions of Zimmerman, the failure of police and the failure of the media...or unless you're a bigot who thinks the life of a Black kid doesn't matter.

The same people now focusing on Trayvon Martin's suspension from school are the ones who ignored George Zimmerman's multiple previous run-ins with the law--including his most recent arrest for "resisting an officer with violence" and "battery of law enforcement officer," and the restraining order his ex-fiancé had taken out against him for domestic violence.

These are the same people who see Black men as criminals and anything they happen to be holding in their hand--candy, a wallet, a cell phone--as a gun.

In fact, the rest of the Sentinel article goes on to describe an aggressive Black teen attacking someone who is only trying to "protect his property." The article--again with no named sources or actual witness statements--claims that Trayvon was the aggressor. The report claims:

Tayvon asked Zimmerman if he had a problem. Zimmerman said no and reached for his cell phone, he told police. Trayvon then said, "Well, you do now" or something similar and punched Zimmerman in the nose, according to the account he gave police.

Zimmerman fell to the ground and Trayvon got on top of him and began slamming his head into the sidewalk, he told police.

Several witnesses heard those cries, and there has been a dispute about whether they came from Zimmerman or Trayvon.

Lawyers for Trayvon's family say it was Trayvon, but police say their evidence indicates it was Zimmerman.

One witness, who has since talked to local television news reporters, told police he saw Zimmerman on the ground with Trayvon on top, pounding him--and was unequivocal that it was Zimmerman who was crying for help.

Zimmerman then shot Trayvon once in the chest at very close range, according to authorities.

Never mind that there are no pictures, reports or hospital documents showing that Zimmerman was injured. Trayvon Martin was asking for it.

THE ORLANDO Sentinel isn't the only source of such claims.

One picture posted widely on conservative sites showed a picture of "Trayvon" with his shirt off, posing in what was termed a "gangsta" (whatever that means) manner, side-by-side with a picture of a smiling, slimmer-looking Zimmerman. The implication? That Trayvon was a gang-banging thug.

But not only was the picture not of Trayvon Martin, it was first circulated by the fascist Stormfront website.

Or there was the "satirical" cartoon that appeared in the University of Texas student newspaper, the Daily Texan, which showed a white mother reading to her child from a book titled "Treyvon [sic] Martin and the Case of Yellow Journalism."

Not all of the attacks being leveled at Trayvon Martin and his family are so openly racist. There are those that couch their blame-the-victim mentality as "concern."

Like gasbag Geraldo Rivera, who lectured on Fox and Friends: "I am urging the parents of Black and Latino youngsters particularly to not let their children go out wearing hoodies. I think the hoodie is as much responsible for Trayvon Martin's death as George Zimmerman was."

As comedian Hari Kondabolu responded, "Geraldo Rivera is blaming the hoodie for the death of Trayvon Martin because when people see dark-skinned kids dressed this way, they assume they are gangsters. Geraldo, you're the reason I shaved my mustache. I was worried people would assume I was an asshole."

Others jumping into the fray to comment on Trayvon's death have political purposes.

Newt Gingrich, who has spent this election season spewing one racist stereotype after another--from calling Barack Obama the "food stamp president" to saying "urban" (i.e., Black) kids have no work ethic--responded to Obama's expression of concern about Trayvon Martin's death as "disgraceful." Gingrich asked, "Is the president suggesting that if it had been a white who had been shot, that would be okay, because it didn't look like him?"

Of course not. But in the world of Newt Gingrich, whites are the real victims and racism doesn't exist.

Given the Post's long history of right-wing politics, racism and bigotry, it may not be a complete surprise that the tabloid rag is exploiting Trayvon Martin's death to peddle its right-wing views. As far back as 1980, the Columbia Journalism Review stated that "the New York Post is no longer merely a journalistic problem. It is a social problem--a force for evil."

But a racist Post headline is merely the sharp edge of mainstream media that were willing to ignore Trayvon Martin's murder until public outrage meant they could no longer do so. And now, they're responding with reporting that uses supposed journalistic impartiality to slander a dead Black teenager.

Some of the slander and distortion is coming in the guise of calls to "settle down" and not "rush to judgment." These people ignore the fact that the authorities "rushed to judgment" weeks ago--only their "judgment" was that the stalking and shooting of an unarmed Black teenager was justified.

They ignore the fact that the only reason the state of Florida has been forced to reexamine the case is because of the millions of voices across the U.S. calling for justice for Trayvon. They act like pointing out the racism inherent in the case and the racism of the system that let George Zimmerman go free is somehow wrong--that the outrage of thousands of people who have taken to the streets for Trayvon is somehow an over-reaction.

The media are underestimating the anger that exists at this horrible crime. And they fail to understand that every racist cartoon, victim-blaming article and racist headline will only add to the determination and commitment of those who want to see justice for Trayvon.