How the U.S. could help Haiti

Helen Scott, an author of numerous articles on Haitian history, looks at what the U.S. could be doing--but won't--to lift the burden for earthquake-ravaged Haitians.

ASKED EARLIER this week by an Associated Press journalist what the U.S. should do to help Haiti, Haitian author Robert Fatton replied: "The international community must shift its priorities and concentrate on helping Haitians build durable state institutions."

While the mainstream media focuses on the apparently insurmountable difficulty of providing relief, there are two measures that the U.S. could immediately take that would greatly assist Haitians in Haiti and in the diaspora in this process of sustainable, democratic rebuilding: cancellation of Haiti's foreign debt, and a permanent overhaul of an immigration system that persistently discriminates against Haitians.

Haiti's foreign debt is the result of political actions by powerful foreign nations and institutions, in collusion with powerful Haitian elite domestic minorities, that have directly provoked state instability, environmental destruction, decimation of the infrastructure and mass poverty.

These realities, as much as direct political repression under dictatorship or coup regimes, necessarily also have led many Haitians to try to leave their home. And yet the U.S. state has persisted in defining Haitians as "economic" rather than "political" refugees (such as those from Cuba, to cite one notorious example of a blatant double standard), and has for decades consistently violated international law by denying Haitians sanctuary and instead forcibly returning them. 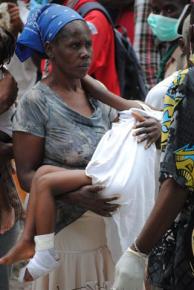 This is part of a long-term and appalling pattern of discrimination against Haitians under U.S. immigration policy. Michael Clemens of the Center for Global Development points out that the U.S. officially absorbs approximately 1 million permanent immigrants annually from around the world.

Despite the xenophobia of chauvinists, there is plenty of evidence that immigration brings economic as well as social and cultural benefits to the U.S. Indeed, the U.S. often portrays itself as a melting pot of immigrants in search of freedom and prosperity. And yet, only about 21,000 Haitian immigrants on average are legally admitted into the U.S. each year, mostly those with a relative here already.

During the reign of terror under the coup regime in 1991, 38,000 Haitians fled and sought safety in the U.S.; of those, fewer than 5 percent received asylum, and the rest were repatriated or held in the infamous prison camps at Guantánamo Bay. Even more criminally, U.S. agencies actually gave names and addresses to coup leaders of some of those who had attempted to flee, guaranteeing arrest, torture and execution for thousands.

Donations and aid are desperately needed in Haiti. Here are some organizations with connections to the grassroots movements in the country.

The Haiti Emergency Relief Fund, organized by the solidarity organization Haiti Action, delivers resources directly to grassroots organizations. It was founded in 2004 after the coup d'etat that forced President Jean-Bertrand Aristide out of office.

For more information, including a telephone contact, go to the Canada Haiti Action Network Web site.

The Zanmi Lasante Medical Center is located in the Central Plateau of Haiti and delivers health care through a network of clinics. The health center survived the earthquake and delivering aid to the disaster zone. You can donate to the center through the U.S. non-profit organization Partners in Health.

SOPUDEP is a pioneering school in Petionville. The resources of the school and its teachers are being mobilized to assist the neighboring population. You can support the school via the Canadian-based Sawatzky Family Foundation.

Since 2001, official policy and practice have actually become even harsher. In 2003, a new comprehensive plan called "Operation Vigilant Sentry" was established. A year ago, Stephen Lendman of the Centre for Research on Globalization wrote an extensive account of current practice. He summarizes official Haitian policy under Bush and Obama:

Detain others under harsh conditions prior to deportation;

Deny Haitians their rights under international law and;

Expeditiously deport over 30,000 refugees (this was after a temporary halt on deportations by ICE--Immigration and Customs Enforcement--after the hurricane of 2008).

EVEN IN the wake of what is generally acknowledged to be among the worst catastrophes in human history, the U.S. continues to treat Haitians like criminals. Navy and Coast Guard vessels are circling Haiti, not to rescue survivors, but to capture and return anyone trying to escape.

Hilary Clinton was quick to declare: "Our ordinary and regular immigration laws will apply going forward, which means that we are not going to be accepting into the United States Haitians who are attempting to make it to our shores. They will be interdicted. They will be repatriated."

The federal government responded to the earthquake by freeing up space in the Krome detention center outside of Miami. And a tent city has been erected at Guantánamo Bay, the Miami Herald reports, "in case waves of Haitians leave their homeland and are captured at sea, said Navy Rear Adm. Thomas Copeman."

A U.S. Air Force plane has been transmitting a message from Raymond Joseph, Haiti's ambassador to the U.S., in Kreyòl across Haiti, the New York Times reported. "Listen, don't rush on boats to leave the country," Mr. Joseph says, according to a transcript released by the Pentagon. "If you do that, we'll all have even worse problems. Because, I'll be honest with you: If you think you will reach the U.S. and all the doors will be wide open to you, that's not at all the case. And they will intercept you right on the water and send you back home where you came from."

The Obama administration has made much of its suspension of deportations and the extension of Temporary Protected Status (TPS) to potentially 125,000 undocumented Haitians in the U.S., which would halt their deportation and allow them to engage in wage labor.

For anyone who believes that the Haitians who ordinarily end up in the Krome detention center are "illegal" and therefore criminal, I recommend that they read Edwidge Danticat's moving autobiographical work Brother I'm Dying.

In it, she tells the story of her Uncle Joseph, persecuted under the Duvaliers, but determined to stay in his Haitian home that he loved, though finally driven out by threats to his life. Against all odds, he made it to Miami to appeal for asylum, but this 81 year-old cancer survivor was thrown into detention at Krome, and died shortly after.

The stories of those Haitians who face deportation due to a past criminal record are often just as wrenching. Like that of Jean Montrevil, who came to the U.S. from Haiti as a teenager with a green card, ran into trouble and was convicted of possession of cocaine. He did 11 years in jail, and turned his life around: he started a business, married a U.S. citizen, became a parent of four U.S. citizen children. He became a model tax-paying citizen, in other words.

But due to that past conviction, he was under an immigration supervision program, and at a routine visit--which he voluntarily attended--he was imprisoned and told he would be deported.

These are the human faces of the policy Hilary Clinton publicly announces as if it is something to be proud of.

THE U.S. government is even blocking emergency medical care for severely injured Haitians. The Department of Homeland Security has said that only 34 people have been granted humanitarian parole, which would make them eligible to enter the U.S. and qualify for Medicaid, on medical grounds. And evacuations to American hospitals were halted for several days while the federal and state governments and the hospitals bickered over who would pay.

How can the U.S. government continue to present itself as a generous source of aid and relief, when it continues to bleed the country dry while treating its inhabitants as criminals?

In order to extend genuine solidarity to Haitians as they struggle against all odds, we must support relief efforts run by accountable groups based in Haiti and run by Haitians already on the ground, not to the Red Cross or the Bush/Clinton fund.

We must not forget Haiti when the stories drop off the front pages and prime time news, which is already starting to happen. And most importantly, we have to organize to change the twisted priorities that are doing so much harm, imposed by our government in our name.

We should call on our government to cancel Haiti's debt: totally, unconditionally and immediately. We should also call for a permanent halt to deportations and the practice of forcibly returning Haitians seeking refuge, and to extend amnesty to Haitians already here but without legal status.

Those who doubt that political activism can have an impact can take heart from the fact that Jean Montrevil was released from prison as a direct result of a protest campaign that grew up around his case.

Amy Goodman of Democracy Now summed it up: "Grassroots and church groups in New York City demanded freedom for Jean Montrevil, and he was released. It is that kind of solidarity that is now needed by millions of Haitians, here and in Haiti, suffering the greatest catastrophe in their history."