Occupation at the New School

STUDENTS AT New York City's New School ended a day-and-a-half-old occupation in the early-morning hours of December 19 after winning important concessions in their demands for greater democracy at their school.

New School President Bob Kerrey, a former senator and well-known figure in the Democratic Party, was forced to negotiate personally with the students, who took over a cafeteria in a building slated to be torn down soon to dramatize their call for a greater voice.

In addition to amnesty for everyone involved in the occupation, the New School administration agreed that students could continue using the building where the occupation took place as a library and study space. Also, students were promised representation on the Board of Trustees and committees to choose future administrators, plus the formation of a committee on socially responsible investing.

The top demand of the students when the occupation began was Kerrey's resignation, along with the school's executive vice president--plus the treasurer of the Board of Trustees, Robert Millard, chairman of one of the largest defense contractors in the country. 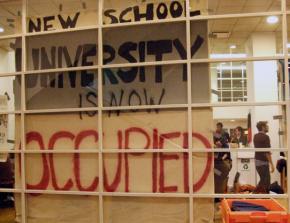 That wasn't achieved. Nevertheless, as the occupiers came out of the 65 Fifth Ave. building to the cheers of a crowd of supporters outside, there was a sense that the fight is just beginning.

The students saw themselves as taking the first steps in a movement that will continue to organize against Kerrey, plus fight on other issues--for example, confronting the fact of low-income students being pushed out of New School, some students suggested.

The potential for keeping up the struggle was clear from the wide support the occupation won, including from students on other campuses facing their own fights in a city where budget cuts are hitting the public education system hard. Even as the occupation ended at close to 4 a.m., there were more than 100 people outside showing their support.

The outside demonstration had swelled to as many as 400 as an apparent late-night deadline to close the occupied building--and a threatened confrontation with security--approached. At one point, the protesters took over Fifth Avenue. Some of the demonstrators then marched into the building and broke through a security cordon to join the occupation, bringing fresh enthusiasm to the students inside after a day of standoffs with administrators and security.

THE OCCUPATION was the culmination of weeks of rising frustration and anger with New School administrators' failure to listen to student demands. "We don't have any say in how the university is managed...or mismanaged," said one student, Rachel.

To discuss their demands, students confronted the Board of Trustees and also tried to gain access to a closed-door meeting that Kerrey was holding with faculty. They got nowhere. These evasions led to the creation of an ad hoc group of New School students that took over the cafeteria in a building at 65 Fifth Ave.

One especially pressing issue was that the building was scheduled for demolition. This would take away the last public student space for those who attend New School. The New School's social science and humanities library, located in the basement of the building, has been essentially useless for months. Books sit in boxes, with only 1,000 available to the 10,000 students currently in the midst of finals.

Meanwhile, Kerrey--who since taking over at New School was implicated in a massacre of civilians while serving a Navy SEAL during the Vietnam War--had appointed himself provost and denied students a voice in their own university. Earlier in the month, the New School faculty overwhelmingly voted no confidence in Kerrey.

As the student occupiers explained in a statement issued the first night:

We have come together to prevent our study spaces from being flattened by corporate bulldozers, to have a say in who runs this school, to demand that the money we spend on this institution be used to facilitate the creation of a better society, not to build bigger buildings or invest in companies that make war. We have come here not only to make demands, but also to live them. Our presence makes it clear that this school is ours, and yours, if you are with us.

One student, Jacob, explained that a combination of the election of Barack Obama, the economic crisis, the student protests of Greece and Italy, and the recent Chicago Republic Windows & Doors factory occupation "gave people the legitimacy that this is larger than the New School."

Nathan, a New School student and member of the Radical Student Union and Students for a Democratic Society, emphasized that the occupation was the product of many different groups and individuals coming together.

After the first night of the occupation, cafeteria workers, members of the UNITE HERE union, learned about the students' protest--and refused to cross picket lines to come to work.

Police and security stopped letting non-New School students into the building--a violation of the New School's arrangement as part of a consortium with other schools, including New York University, that pledge to share facilities. After this happened, students moved to take control of a side door exit to the building so they could let people in and out, without interference from security.

Kerrey came to the cafeteria around noon to address the students. But when he was talking, police and security rushed into the corridor and scuffled with students. A protester who was not a student was arrested.

Maria, a Hunter College student who came to the occupation to show her support, said, "The security guard picked me up and pushed me to the ground...Cops came in later and pushed someone against the wall. The violence was completely unprovoked...It was the worst act of violence I've seen in front of my own eyes. Three cops had this young man by the neck and were shoving him against the wall."

Security clamped down on access to the building. But the occupiers maintained a blog from inside to appeal for solidarity--and they were successful. In particular, students in New York who are facing battles on their own campuses came to lend their support.

The connections to other struggles was on the minds of students like Pat, who talked about how many students involved in the occupation had decided to attend the New School because of its history as a home for leftist history, thought, faculty and action. "What we found," he said, "was a corporate institution."

Pat connected the attacks on students at the New School to larger systemic attacks on higher education that are affecting students across the country. "Students are getting into more debt, education is becoming less affordable," he said. "If we don't apply pressure, what's going to happen?"

The key to answering that question will be to build a fighting response--and the occupation at New School can serve as an example of how to get started.