Winter Soldier then and now

More than 200 veterans and active-duty soldiers from the U.S. wars on Iraq and Afghanistan will tell their story in Washington, D.C., at a gathering named Winter Soldier. As Eric Ruder explains, they will be following in the footsteps of the antiwar vets who spoke out against the war in Vietnam.

THE ORIGINAL "Winter Soldier Investigation" took place in a Detroit hotel from January 31 to February 2, 1971--but it wasn't the first time veterans of the U.S. war on Vietnam had gathered to give testimony about the war crimes they witnessed or participated in during their deployments to Southeast Asia.

In fact, the Detroit Winter Soldier hearings followed similar smaller tribunals in dozens of cities and towns across the U.S. as part of a process of reaching out to and identifying vets with compelling stories.

"Winter Soldier was the culmination of a year and a half of organizing of veterans," Michael Uhl, one of the vets who helped put on the hearings, said in an interview. "There were dress rehearsals all over the country. We mobilized veterans to speak in their own words about their own experiences."

In Detroit, more than 100 veterans provided testimony about atrocities committed by U.S. troops in Vietnam, and at least 500 more came to listen.

The mainstream media's coverage of the event was deafening silence. Thankfully, though, this historic gathering was preserved in Winter Soldier, a grainy, black-and-white documentary released in 1972 that has been screened widely in the run-up to "Winter Soldier: Iraq and Afghanistan," organized by Iraq Veterans Against the War (IVAW) for March 13-16 in Washington, D.C. 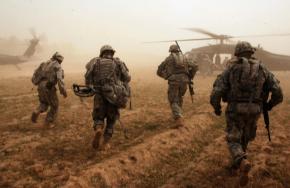 THE SHOCKING revelation that U.S. troops massacred some 500 people, mostly women and children, in the hamlet of My Lai provided the impetus for the antiwar activists who initially spearheaded efforts to get veterans to tell their stories.

Though the massacre occurred on March 16, 1968, it took more than 18 months for investigative journalist Seymour Hersh (the same Hersh who has exposed U.S. war plans against Iran today) to get the story and make it mainstream news.

After first denying that any massacre took place, the Pentagon changed tack when pictures taken by U.S. Army photographer Ronald Haeberle surfaced. Then, Army brass insisted that the mass murder of Vietnamese civilians was the deranged act of a few rogue soldiers. One soldier, Lt. William Calley, was convicted in the hopes that the incident could be swept under the rug.

That's exactly what spurred antiwar activists and GI organizers to assemble veterans to bring their voices, grounded in their firsthand experiences, to bear on government attempts to deny the criminal nature of the war on Vietnam.

You can also get news and updates about war resisters and other initiatives by antiwar veterans and active-duty troops at the IVAW site.

Camilo Mejía's book, Road from Ar Ramadi, provides an eyewitness account of the brutality inflicted by the U.S. in Iraq--and how Mejîa made the decision to take a stand against it.

For an excellent history of the GI rebellion during the U.S. war on Vietnam, read David Cortright's Soldiers in Revolt, republished by Haymarket Books. David Zeiger's Sir! No Sir! is an inspiring documentary about the Vietnam soldiers' revolt, and is available on DVD, along with many other supplemental materials.

"My Lai was only a minor step beyond the standard, official United States policy in Indochina," explained Al Hubbard, a leading member of Vietnam Veterans Against the War (VVAW). "It is hypocritical self-righteousness to condemn the soldiers at My Lai without condemning those who set the criminal policy of free-fire zones, strategic hamlets, saturation bombing...from which My Lai was the inevitable result."

VVAW member William Crandell's opening statement at the Detroit hearings was laced with the deep sense of betrayal shared by many veterans. "We went to defend the Vietnamese people, and our testimony will show that we are committing genocide against them," Crandell said. "We went to work toward the brotherhood of man, and our testimony will show that our strategy and tactics are permeated with racism."

The harrowing testimony that followed documented beatings, rape, summary executions, and the wanton destruction of livestock and other means of survival in Vietnam.

But Winter Soldier and the other hearings were more than soldiers telling their war stories.

"We worked very hard to tease the policy out of it--not just the individual atrocities, which we also collected, of course," explained Tod Ensign, director of Citizen Soldier and one of the architects of the war crimes hearings during Vietnam.

"We wanted to know how the testifiers knew what they reported. When did you learn this? Where did the order come from? What did the colonel say? We wanted to illustrate the responsibility of the highest echelons of the military and the government for the war crimes that soldiers were forced to carry out."

The media's collective disregard for the Winter Soldier hearings led VVAW leaders to conclude that a more assertive approach was necessary to get noticed and project the soldiers' message to a larger audience.

So the VVAW began planning Operation Dewey Canyon III (Operation Dewey Canyon I and II were codenames for U.S. military incursions into Laos in 1969), a weeklong encampment and series of actions in Washington, D.C., in the run-up to a planned antiwar march of half a million people on April 24, 1971--one of the largest marches in U.S. history up to that point.

These two elements of antiwar protest--actions by vets and bigger demonstrations--reinforced each other. GIs drew confidence for their bold actions from the growing protests, and the larger movement gained new energy from the participation of Vietnam veterans.

Two days before the April 24 mass march, more than 800 veterans tossed their medals onto the Capitol steps. That became one of the most enduring images of the GI movement and catapulted the VVAW into national prominence.

During the course of 1971, the group grew from about 1,000 members to 20,000. More importantly, Dewey Canyon III cemented the VVAW's leadership of a significant section of the civilian antiwar movement, with some 50,000 non-veterans joining the organization as supporters.

TODAY'S WINTER Soldier takes place in an entirely different political moment, with some advantages as well as some important disadvantages.

Antiwar sentiment today, as measured by public opinion polls, is significantly higher compared to five years after the start of the Vietnam War. And George Bush's approval rating is even lower than Richard Nixon's.

Yet the level of organized antiwar opposition is certainly lower today. "I haven't heard anyone talking about how we're going to mobilize this spring to end the war," said Ensign. "During the Vietnam War, the size of the antiwar movement as a whole produced a dynamism and showed people that they were a part of something. We were engaged, and the whole country was engaged, in what was nothing less than cataclysmic pressure for change.

"So when Vietnam veterans came home from the war, they were immediately swept up and influenced by these movements. They would go back into factories and to colleges where these movements were vibrant.

"Their families and communities were also swept up by these movements. This naturally propelled veterans into organizing. They organized to denounce and activate against what they had been forced to do, to be the executioners of these genocidal policies.

"The fact that today we don't have anything approaching a movement of this scale is going to affect how this society receives what these young people have to say, and it's going to affect participation by the veterans themselves."

Today's veterans can stand on the experience of a previous generation of antiwar GIs who showed that organized dissent within the ranks is capable of hampering the effectiveness of the U.S. military as a fighting force--a decisive factor in Washington's decision to withdraw the troops from Vietnam.

But it's important to recognize that the U.S. has more at stake in the Middle East than it did in Vietnam. Forcing the U.S. to concede that it cannot command the flow of oil and the geopolitical influence it seeks in the region will demand the building of a powerful social movement.

If it chooses to do so, the IVAW--with its high profile and credibility--can play a central role in shaping the contemporary antiwar movement, while helping to give it new energy.

According to Phil Aliff, a member of the IVAW's executive board, achieving this will require the organization to think carefully about how to build up its local chapters in cities and on campuses, as well as reach out to active-duty troops.

"I was recruited into the IVAW by someone I had served with in my platoon," said Aliff in an interview. "When he was discharged, he joined the IVAW. Later, he got in touch with me because he knew I was opposed to the war. That's how I got involved. That initial connection--between me and my buddy who got out and joined the IVAW--was critical to the founding and success of the Fort Drum chapter.

"So I think the most important step for building active-duty chapters is for IVAW members to think about talking to the people they know who are still serving and are likely to be interested in getting active against the war.

"I also think it's incredibly important to have other organizations beyond IVAW that are willing to support a chapter. Our chapter at Fort Drum wouldn't exist without the hard work of other activists and the Different Drummer Café, a GI coffeehouse, not only to help organize events near the base, but also to train us as organizers, since we're so isolated from the rest of the IVAW.

"We especially want to work closely with student activists, because not only are veterans on campuses, but IVAW members are also students, so groups like the Campus Antiwar Network and the IVAW have a symbiotic relationship."

With strong chapters, says Aliff, the IVAW can become known as the GI organization that fights for active-duty troops--that stands up for better health care and services on bases and at VA facilities, that exposes the war crimes that GIs are forced to carry out and sometimes even prosecuted for while the commanding officers go free.

"Active-duty soldiers are not alone in their opposition to the war," said Aliff. "Winter Soldier shows that there is a large community of us. We are directly trying to end the war. And we want you to add your voice to the cause."