Fear and loathing and more fear

Elizabeth Schulte documents the new low points that Trump and the Republicans are reaching — and the dismal failure of Democrats to stand up for justice.

YOUR PRESIDENT wants you to hate and fear immigrants.

That was the message of a new attack ad that Donald Trump himself tweeted a little over a week before the midterm elections. The ad featured an undocumented immigrant jailed for killing two California sheriff’s deputies and then scenes of the refugee caravan currently making its way through Mexico to seek asylum from poverty and violence in Central America.

Lettering above the man on trial reads: “He killed our people.”

The last-minute campaign ad aimed to create an indelible image of immigrants as murderers who are “invading” the U.S. with the Democrats’ blessing — and an equally indelible conclusion that only Trump and the Republicans will protect you from violence. 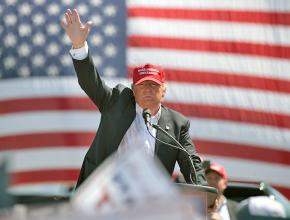 Rep. Duncan Hunter of California issued an ad claiming that his Democratic opponent, Ammar Campa-Najjar, a former Labor Department official, is trying to “infiltrate Congress” on behalf of the Muslim Brotherhood and is a “security risk.”

In upstate New York, the National Republican Congressional Committee aired several commercials attacking a Democratic candidate for Congress, Antonio Delgado, who is Black, for having been a rap musician. In one ad, several white upstate New Yorkers speak to the camera: “Antonio Delgado would be fine in Los Angeles, maybe New York City,” but “nobody talks like that around here.”

These vile ads leading up to the midterm elections have a history. Politicians of both main political parties have created similar ones using racism and xenophobia to whip up fear and reinforce the most backward and divisive ideas in U.S. society.

In 1988, the presidential campaign of George H.W. Bush ran a commercial featuring “Willie” Horton — his name was William Horton, but “Willie” fit the stereotype the ad makers were after — a Black man accused of a killing a white woman while free on a prison work-release program in Massachusetts under then-Gov. Michael Dukakis.

The ad aimed to whip up fear about crime — and the fear of Black people committing crimes in particular.

But Republicans aren’t the only ones to pander to racism during their campaigns.

During the 1992 presidential campaign, Democratic candidate Bill Clinton thought he could score points by attacking anti-racist activist and recording artist Sister Souljah for her comments about the Los Angeles rebellion that year. For that matter, Clinton’s running mate Al Gore was the first candidate of either party to use Horton against Dukakis — during the 1988 Democratic primaries.

It says a lot about the cynicism of the politicians of the “world’s greatest democracy” that they’ve used coded and not-so-coded racism so freely during elections over the decades.

IN THAT sense, Trump’s ads are very much a part of the U.S. political system. But under the current circumstances, there’s a difference: Trump’s racist anti-immigrant ad is advising his supporters to do more than fear and hate immigrants. It encourages them to take action.

The message came through loud and clear to far-right militia groups, who stated that they are traveling south to “protect” the border for when the caravan arrives.

Militia units told the Associated Press that they were planning on gathering with guns and bulletproof vests. Immigrants are “just laughing in our face,” fumed Shannon McGauley, president of the Texas Minutemen. “It’s a free-for-all in America.”

The vigilantes won’t be alone, of course. Hundreds of U.S. troops have already arrived at the border near Hidalgo, Texas, with more to come. Their stated mission is to help U.S. Customs and the Border Patrol, and there were plenty of photo ops of soldiers setting up barbed-wire fence along the Rio Grande.

“I saw that beautiful barbed wire going up,” Trump said at a campaign rally in Montana. “Beautiful sight.”

All of this is part of Trump’s “Operation Faithful Patriot,” which grows larger by the day, depending on the whims of the president — from 5,000 active-duty troops last Wednesday to 15,000 a few days later. This is in addition to thousands of National Guard troops who are also gathering at the border.

Asked by reporters whether the troops planned to fire on immigrants trying to cross the border, Trump responded that if caravan members threw rocks, the military “would consider that a firearm because there’s not much difference.

The Trump administration is preparing for a confrontation — not just at the ballot box with the midterm elections, but literally a confrontation at the border, led by racists inspired by Trump’s America First rhetoric that demonizes immigrants seeking relief from poverty and violence.

Instead of meeting Trump’s racist campaign message with the alarm it deserves, the Democrats are doing the opposite.

For example, House Democratic leader Nancy Pelosi responded to Trump’s threat to revoke birthright citizenship with the statement: “Clearly, Republicans will do absolutely anything to divert attention away from their votes to take away Americans’ health care.”

It isn’t just the party leadership, either. Down the line, that’s how Democrats are responding: stay on message, because the winning campaign message isn’t about protecting the caravan, it’s about health care.

Yes, health care is an important issue — and one that affects millions of Americans. But championing health doesn’t mean not challenging anti-immigrant racism.

Not that the Democrats are even addressing health care in any effective way. The most that the Democrats are putting forward on health care is a defense of Barack Obama’s Affordable Care Act — which many people support against Republican efforts to dismantle it, but which is deeply flawed and ineffective at its supposed goal of universal coverage.

Democrats are drawing the line at stopping Republicans from letting insurers use pre-existing conditions as an excuse not to cover people. The GOP should be stopped, of course — but it’s not exactly a bold stand in defense of health care justice.

But this is the perennial logic of the Democratic Party under the constraints of the two-party system in the U.S.: Don’t make the message too radical, because the party’s base of support that would agree with a more radical message is going to vote for you anyway, since they have nowhere else to go.

IN MANY ways, immigration is the perfect message for Trump. Not just because racism plays to the Republicans’ right-wing base, but because the Democrats have so little to say in response.

The Democratic Party has no long-term solution to the suffering of refugees who are part of the caravan to the border.

Even the most liberal Democrats agree that while reforms are needed and programs like DACA (Deferred Action for Childhood Arrivals) should be protected, there’s also a need for strict immigration standards and heavily militarized border security enforcement.

This summer, U.S. immigration policies took center stage when it was revealed that Immigration and Customs Enforcement (ICE) was separating undocumented children from their families and detaining them in cages.

The inhumane conditions endured by undocumented children sparked protests around the country, many organized by liberal organization like MoveOn and Indivisible, which ordinarily don’t stray too far left of the Democratic Party line.

Outrage at what the U.S. government was doing led to calls to “Abolish ICE” — and in short order, some Democratic Party figures were adopting a slogan that weeks earlier would have only been heard from the left.

The demand to do away with a hated government enforcement agency that terrorizes millions of undocumented immigrants fit the moment like a glove. The unbelievable cruelty of the Trump administration had come together with the explosive nature of the struggles of ordinary people against him.

But that was then. For the past months leading up to the midterm elections, the Democrats have been running away from the issue of immigration in any form. The Center for American Progress, a well-known liberal think tank, advised Democratic candidates to avoid the discussion of immigration and pivot to...you guessed it: health care.

Even democratic socialist Alexandria Ocasio-Cortez — whose primary victory last spring over a machine Democrat helped popularize the Abolish ICE slogan — had softened her message by late August, when she said in a tweet, “#AbolishICE means not having an agency that incarcerates children and sexually assaults women with impunity. It does not mean abolish deportation.”

Trump is sowing fear to whip up his conservative base. But the Democrats are sowing fear of a different kind among their base — fear of Trump and fear of talking too radical and “alienating” moderate voters.

The resistance to Trump’s atrocities on immigration will need to ignore the Democrats’ cynical political calculations and organize opposition that stands proudly under the banner of “Abolish ICE.”

We need a socialist alternative that understands that the real “immigration problem” in the U.S. is the billions wasted militarizing a border and persecuting the vulnerable that could be used to welcome people across it if they want to come.