The bad news about the “good news” economy

Trump may tweet out boasts about the economy, but fellow Republicans seem hesitant to campaign around tax cuts and economic policy. That tells us something about who’s getting the benefits of the economic expansion and who isn’t, writes Lance Selfa.

IN BETWEEN sending out furious tweets denouncing Robert Mueller, Black athletes and his own attorney general, Donald Trump took time out from his “working vacation” last week to make a bold prediction to 30 business executives meeting at his New Jersey golf club. Soon, he said, U.S. gross domestic product — which has been growing at an average annual rate of between 2 and 3 percent — will be “in the fives.”

The boast came more than a week after the U.S. Commerce Department estimated that the U.S. economy grew at an annual rate of 4.1 percent in the second quarter of this year from April through June. But GDP could “go much higher once we get new trade deals,” Trump said.

Trump’s rosy prediction also came on the heels of two consecutive monthly reports putting the unemployment rate at the lowest level since the early 2000s.

With the economy seemingly doing so well, how is it that Trump’s approval rating — locked in a tight band around 40 percent virtually since his inauguration — doesn’t seem to reflect this? Most presidents with the top-line economic numbers that Trump has touted — unemployment down, stock market up, economic growth picking up — would be banking majority support. Why not Trump? 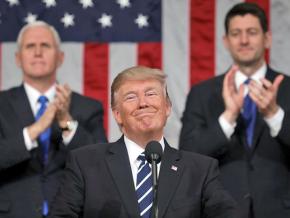 The first and most obvious explanation is that we’re talking about Donald Trump.

His is an administration that thrives on outrage, polarization and catering to a hard-right minority. His most committed supporters may feel a bond with him, but most of the rest of the U.S. sees a billionaire bigot and con man, atop a corrupt administration seemingly designed to enrich himself and his friends.

Beyond that, public opinion about the economy is more mixed, for several reasons.

Still, you’d think the Republicans would be taking advantage of the state of the economy. As the egregious Newt Gingrich put it, “The central question for voters regarding the November elections should be simple: “Do you want Americans to continue to be more prosperous, more able to invest in their businesses and families, and have more control over their futures — or do you want to elect Democrats?”

But in recent special congressional elections in Pennsylvania and Ohio, the Republicans abandoned plans to campaign on last year’s tax cuts and Trump’s economic policies in favor of “culture war” issues like immigration and misogynistic attacks on House Democratic leader Nancy Pelosi.

If the GOP isn’t confident that Trump’s economic record can motivate its own base, what does that say about the underlying state of the economy? Here’s where we have to look below the surface of the top-line numbers to see not only what’s going in the economy, but also how ordinary people are experiencing it.

DESPITE THE normal Trump puffery, GDP expansion has been neither explosive nor unexpected. The Obama administration presided over four quarters where GDP expanded at 4 percent or greater, and the projected expansion of the economy in 2018 is right on par with Congressional Budget Office predictions.

The Trump tax cuts stimulated the economy, as most economists predicted, but their impact was highly concentrated in the corporate sector and among the very rich.

Trump and his congressional enablers sold the Tax Cuts and Jobs Act passed last December as a boon for investment, jobs and workers’ wages. They even pointed to holiday bonuses that some corporations awarded their workers as evidence that the tax cuts were already being felt in workers’ paychecks. (It was never explained why many of these bonuses were paid out before the bill passed, but no one ever accused these people of following elementary logic.)

With almost three quarters of 2018 in the books, it’s clear that the tax cuts have worked just as expected — and intended — for corporations and the rich, but they’ve done little or nothing to increase wages or add jobs.

Domestic corporate profits showed an “enormous spike” in the first quarter of 2018, while corporate tax revenues going to the federal government dropped.

According to the research firm Trim Tabs, more than $437 billion of this windfall went into stock buybacks — where companies buy their own stock, increasing its price, and putting money into their shareholders’ pockets.

A Just Capital study of the largest 1,000 U.S. firms found that 57 percent of the overall tax cut windfall went to shareholders, compared to only 7 percent that went to workers in bonuses or benefits.

The tax cut merely accelerated a trend that was already established. For example, between 2015 and 2017, the restaurant industry spent more on stock buybacks than it made on net profits. So it financed these buyback purchases by borrowing money at low interest rates.

In an industry where 40 percent of workers live in poverty, it’s telling that executives would rather borrow money to enrich themselves and their shareholders than to invest in workers. If McDonald’s had devoted the amount it spent in stock buybacks to workers, it could have given every member of its 1.9 million global workforce a bonus of $4,000.

THE UNEMPLOYMENT rate is at its lowest point since the late 1990s and early 2000s — which was the last time that real wages increased for a broad swath of workers. But this time, workers’ wages aren’t increasing.

Even with reports of labor shortages in industries and areas around the country, wages are just keeping pace with inflation — and sometimes not even that.

A Labor Department report released last week calculated that the official measure of cost of living was up 2.9 from July 2017 to July 2018, while wages rose by 2.7 percent. “The average U.S. ‘real wage,’ a federal measure of pay that takes inflation into account, fell to $10.76 an hour last month, 2 cents down from where it was a year ago,” reported the Washington Post.

Wage increases are significantly lower than economists expect them to be given the jobless rate and economic growth statistics. “[S]ome economists say that [low unemployment] should add up to wage growth rates of about 3.5 percent. Instead, wages are increasing at a 2.7 percent annual rate,” wrote Yuki Noguchi of National Public Radio.

As for the Trump regime’s claims about tax cuts leading to investment, analysis of government data by Josh Bivens of the Economic Policy Institute shows that the trend in “nonresidential fixed investment” appears unchanged by the change in taxes. And new orders for non-defense capital goods were actually down in the first six months of 2018 from the same period in 2017.

Most of the investment that is happening in the U.S. economy appears to be closely related to the energy industry — that is, petroleum and natural gas. This has more to do with the increase in oil prices in the last two years than with taxes or even deregulation. In fact, investment in the energy sector under Trump is actually lagging the increases clocked up during the Obama administration’s first term.

So even if one accepts the idea that Trump’s policies will lead to increased investment, which will lead to economic expansion, job creation and wage increases, it’s clear that the first link of that chain hasn’t even been grasped yet.

And even if it was, the only guarantee that the benefits of this kind of expansion would go to workers would be their following the example of the “red state teachers’ rebellion.” The historically weak state of working-class organization explains more about the current state of economic inequality in the U.S. than statistics on economic productivity or investment.

DESPITE THE run of economic “good news,” the factors that make life precarious for working-class Americans haven’t changed fundamentally at all.

The list is long, but it would include: $1.5 trillion in student debt, 80 percent of American workers living paycheck to paycheck, a generation’s worth of lost wealth from the 2008 housing crash, unaffordable childcare costs and a retirement savings crisis.

It’s these huge problems — created through decades of attacks on workers’ living standards, huge increases in the costs of education and cutbacks in federal student grants, the 2007-08 Wall Street housing bubble and the gutting of pensions — that have left the majority of people in the U.S. continually on edge, fueling the political volatility of the current moment.

On the 10th anniversary of the financial crash that led to the Great Recession, New York magazine’s Frank Rich wrote that Americans “stopped believing in the American Dream” of upward mobility. Rich continued:

Perhaps the sole upside to the 2008 crash was that it discredited the establishment of both parties by exposing its decades-long collusion with a kleptocratic economic order...The moral abdication of would-be liberal reformers, who failed to police such powerful economic actors, only added to the national disgust with elites. It’s that vacuum that created the opening for a master con man.

Once in the White House, of course, Trump conducted the biggest spree of grand larceny ever carried out by the wealthiest sliver of the country in the name of “tax reform.” Everyone knows he is doing it except those among his base who dismiss all unwanted news as “fake news.”

But it’s a measure of how much the country is broken that we just shrug with resignation when the wealthy Democratic Goldman Sachs alum Gary Cohn joins this administration to secure an obscene tax cut, then exits without apology to enjoy his further enrichment at the expense of the safety net for the country’s most vulnerable citizens.

MEANWHILE, AS we deal with the uneven aftereffects of the 2008 crisis, another crisis could be looming in the not-so-distant future.

The Bush-Obama Federal Reserve policies of buying toxic debt, maintaining ultra-low interest rates and priming the economy with “quantitative easing” caused the U.S. corporate sector to go on a debt binge. Many leading companies even borrowed money to buy back their own stock, and Wall Street is packaging and selling so-called “covenant-lite” loans that investors buy with the knowledge that they have fewer safeguards against default.

At the same time, the Organization of Economic Cooperation and Development has raised an alarm about “zombie” companies, which make only enough profit to cover the costs of servicing their debts.

The danger is that, as economic growth causes inflation to accelerate and the Federal Reserve increases interest rates, many leading U.S. companies could be caught short, unable to service their debts.

The popping of a corporate debt bubble would cause huge losses among bondholders, including university endowments and state government employee pension funds. It could lead to a “credit crunch” and even higher interest rates for consumer loans like mortgages and auto loans.

The U.S. could end up right back in a situation like 2008, but with less ability for the government to head off an even bigger crisis. A foreshadowing of what can happen when a debt binge suddenly unwinds is the current economic meltdown in Turkey.

In 2009, as the government spent trillions to prevent the economy’s plunge into a depression, Newsweek magazine declared “We’re all socialists now.”

But a decade’s worth of government bailouts for the system’s financial bad actors have helped to convince millions that “socialism” isn’t about government bailouts — but about challenging and replacing a capitalist economic system that is fundamentally rigged against the working class and oppressed.