Ruling the world for good under Sanders?

Bernie Sanders' speech last week setting out a progressive foreign policy was widely celebrated--but it wasn't as radical as some made it out to be, writes Ashley Smith.

They certainly had good reason to wish for an alternative, with Donald Trump escalating his threats of "fire and fury" against North Korea and the "opposition" Democrats keeping quiet--when they weren't joining in themselves.

Unfortunately, Sanders' statement of his views, while a clear contrast with the Washington consensus, fell far short of a genuine internationalism that we should expect of a socialist.

Sanders remains very much within a liberal imperialist consensus that presumes the U.S. state has acted, and should act, in his words, "to champion the values of freedom, democracy and justice, values which have been a beacon of hope throughout the world." The left needs a genuine anti-imperialist alternative that can stand in opposition when the U.S. war machine goes into action--justified by exactly these phrases from liberals, alongside Trump's xenophobic nationalism. 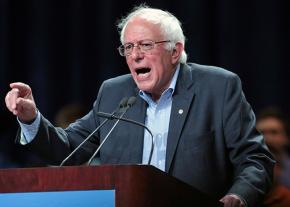 SUCH AN alternative has no voice in the U.S. political mainstream today.

The billionaire bigot and current occupant of the White House stooped to new lows with his bellicose address to the United Nations last week. He mixed childish insults toward Kim Jung-un with a genocidal promise to "totally destroy" North Korea.

Just before that, however, all but four Senate Democrats--with liberal standard-bearer Elizabeth Warren not among the four--joined their Republican colleagues in approving Trump's $700 billion military budget. The Democrats thus gave a blank check to the warmonger-in-chief at the very moment he is threatening nuclear war in Asia.

The Democrats' unity with the Republicans on the U.S. military budget and interventions should come as no surprise. Far from being an antiwar party, the Democrats initiated most of Washington's imperialist wars in the 20th century. And they backed the ones started by Republican, including Bush's so-called "global war on terror" that started with wars on Afghanistan and Iraq.

Clearly we are in desperate need of antiwar and anti-imperialist voices willing to stand up to the bipartisan consensus. But Sanders, as antiwar activists in Vermont know well, is an unlikely spokesperson.

Sanders did once organize against the Vietnam War, and as a member of Congress, he voted against the two U.S. wars on Iraq in 1991 and 2003. But he supported Bill Clinton's war on Serbia in 1999, voted for Bush's war in Afghanistan in 2001, and has voted "yes" on many military budgets for those interventions, including those that funded the Iraq War.

Sanders has also supported boondoggle military programs, including the basing of the military's F-35 fighter at his hometown airport in Burlington, Vermont. As Politico documents, he was rewarded handsomely for his support: Sanders actually rivaled Hillary Clinton in contributions from defense industry employees in the 2016 Democratic primaries.

During his contest with Clinton for the Democratic presidential nomination, Sanders advocated what was, in essence, Barack Obama's foreign policy. He stuck to boilerplate attacks on neocon unilateralism and pre-emptive war associated with the Republicans, but supported Obama's decision to extend the occupation of Afghanistan and his escalated drone war.

At his best, Sanders criticized Israel's right-wing Prime Minister Benjamin Netanyahu. But as a liberal Zionist, he has steadfastly opposed the boycott, divestment and sanctions (BDS) movement against Israel. He even signed on to a letter denouncing the UN for having an "anti-Israel agenda"--and he has toed U.S. imperialism's call for a two-state solution, which, in practice, would rubber-stamp Israeli settler colonialism.

Worse, Sanders called for Saudi Arabia--one of the headquarters of global reaction and a critical Middle East ally of the U.S. government--to take a larger role in fighting terrorism in the Middle East.

SANDERS' WESTMINSTER speech sounded refreshing in comparison to the standard fare in Washington these days.

Among many radical voices, it was hailed as a long-awaited leftist statement, on par with the anti-imperialism of British Labour Party leader Jeremy Corbyn.

At Jacobin, Branko Marcetic called Sanders' speech "a vision that sharply rejects decades of Washington consensus of foreign policy." The Intercept titled an otherwise more critical interview with the Vermont senator: "Bernie Sanders to Democrats: This is what a radical foreign policy looks like."

Unfortunately, it was not so very radical.

In the speech's most radical moments, he exposed some of U.S. imperialism's many crimes, like its coups against democratically elected governments in Iran in 1953 and in Chile in 1973. Sanders went so far as to call into question the "global war on terror" as the organizing principle of American foreign policy.

But the truth is that Sanders sees these crimes as an exception to a more benevolent history--and potential for the future.

Sanders, for example, celebrates the "international order which the United States helped establish over the past 70 years, one which put great emphasis on democracy and human rights, and promoted greater trade and economic development."

This puts a rosy spin--to say the least--on these institutions. American imperialism set up the United Nations, NATO, the European Economic Community (the predecessor of the EU), the General Agreement on Tariffs and Trade (precursor to the World Trade Organization), the International Monetary Fund and the World Bank not to serve the interests of working and oppressed people, but to carry out the policies of their capitalist masters.

All of these institutions were designed to shore up the capitalist world system, lock in American dominance over its allies against Russian imperialism's bloc in the Cold War, and pry open the world market for American multinationals.

The words of American journalist John Reed from the beginning of the 20th century applied every bit as much in the postwar era: "Uncle Sam never gives you something for nothing. He comes along with a sack stuffed with hay in one hand and a whip in the other. Anyone who accepts Uncle Sam's promises at face value will find that they must be paid for in sweat and blood."

Bitter experience has rightly taught people around the world to question and oppose the postwar order that Sanders lionizes. The U.S. used human rights and democracy as alibis to intervene throughout the world, violating both principles in the process. It used the IMF, World Bank and the WTO to plunder the developing world.

LIKE ITS predecessor, the League of Nations, which the Russian revolutionary Lenin famously called the "thieves' kitchen," the UN is a guardian of the international status quo, presided over by the most powerful governments. It is controlled by the great powers that belong to the UN Security Council--they either sideline the UN General Assembly when they don't agree, or use it for joint imperial aims when they do.

The world's most powerful governments don't deploy the UN for the benefit of exploited and oppressed people--as the UN's record in Haiti proves beyond a shadow of a doubt. The ongoing UN occupation has repressed the popular movement, introduced cholera to the country via occupation forces, aided and abetted predatory sweatshop development and betrayed promises to reconstruct Haiti after the devastating earthquake of 2010.

NATO, meanwhile, is the gendarme of U.S. domination over Europe--and increasingly throughout the entire world, as the alliance's use in Afghanistan demonstrated. The EU became a vehicle for the neoliberal restructuring of Europe's capitalist order, particularly in the aftermath of the Great Recession, when draconian austerity was imposed on Greece and other countries in its name.

Even the Marshall Plan after the Second World War--which Sanders points to as an example of Washington's past benevolence--proves the imperial nature of the American state.

After the Second World War and at the start of the Cold War, the U.S. paired this plan with the Truman Doctrine to rebuild capitalism in Europe, defend its section of the continent as a sphere of influence against the USSR and its Eastern Bloc, and repress revolution from below, as in Greece.

LEAVING ASIDE Sanders' fanciful recollections of U.S. imperialism's past, in the present, he argues for diplomacy to take precedence over military force. On the surface, this seems progressive. But Sanders' own example of the Obama administration's nuclear deal with Iran reveals darker motives.

The U.S., remember, is the only state to have used nuclear weapons in a time of war--when it incinerated Hiroshima and Nagasaki at the end of the Second World War.

The U.S. government's aim today is to protect its nuclear monopoly--and that of its allies. Reflecting this viewpoint, rather than challenging it, Sanders turns a blind eye to Israel's development of atomic weapons--while singling out Iran and North Korea for criticism.

Sanders celebrates, as a victory for diplomacy, the agreement that the Obama administration made with Iran, which traded strict limits on Iran's nuclear program for a loosening of U.S.-led economic and political sanctions. The deal was only made after years of cyber-warfare, military threats and an economic blockade--yet Sanders calls it "real leadership. That is real power."

The military force that stands U.S. "diplomacy" at every step contradicts Sanders' aspiration that the U.S. could "defend and expand a rules-based international order in which law, not might, makes right."

And lest anyone mistake Sanders for a pacifist, he admits, "Yes, military force is sometimes necessary, but--always--as the last resort." In truth, the U.S. has justified nearly every war it launched with the alibi that it had tried everything else, and military action was its last resort.

At the core of Sanders' foreign policy vision is a social-democratic illusion that the capitalist state is a neutral institution, which can be wielded by elected leaders for progressive or even socialist aims.

That is a far cry from his days as an anti-Vietnam War activist. Aware of the distance he has travelled, Sanders concedes, in his interview with the Intercept, that he is no anti-imperialist: "Noam Chomsky has played an extraordinarily important role. I am a United States senator. We live in different worlds."

On this, Sanders is right--and radicals can confirm it by reading Chomsky or listening to Martin Luther King Jr., who rightly described the U.S. government as "the greatest purveyor of violence in our world today."

THE U.S. state--and particularly its military component--cannot be a vehicle for progressive social change.

It represents and defends the interests, domestically and internationally, of the U.S. ruling class. Its imperialist drive doesn't change with elections. It is locked in competition with other imperial states, as well as less powerful governments, over which powers will dominate the global order.

First, to the extent that he does differ from the mainstream Washington consensus, Sanders has no vehicle--no political party--to advance an alternative vision. His chosen one, the Democrats, as their vote in the Senate proves, is thoroughly capitalist, pro-war and imperialist.

Second, even if Sanders could rise to the head of an actual social-democratic party and be elected to power, he and it would be captive to the interests of the capitalists who dominate the political system. The 20th century is filled with examples of such reformist parties in imperialist countries that professed antiwar policies while out of power, but operated quite differently once in positions of power.

Sanders' hero, the Socialist Party leader Eugene Debs--whose portrait still hangs in the senator's office today--offered a different outlook. In his famous speech against the First World War in Canton, Ohio--which Democratic President Woodrow Wilson used as a pretext to have Debs prosecuted and jailed on charges of sedition--Debs argued that the U.S. state was imperialist and predatory to the bone.

Rather than adopt Sanders' views, socialists today need the uncompromising anti-imperialism that Debs voiced, as part of the struggle for a socialist future.

From that project, no matter how momentarily unpopular, as Debs said, "the heart of the international socialist never beats a retreat."