How do we build political power?

Paul D’Amato, author of The Meaning of Marxism, argues that socialists should see running for office as just one strategy for building the political strength of our class.

THE MASS outpouring of protest against Donald Trump and his policies has been inspiring, drawing out hundreds of thousands of people and creating a situation in which the possibilities for solidarity--in defending every group Trump attacks--have become more tangible.

There is not only anger against Trump--and, of course, a great deal of fear, too--but also a positive desire for something different.

What the Democratic primaries showed clearly, with Bernie Sanders' remarkable showing, is that there are many people who dislike capitalism and want a more equal society where people are placed above profits--and lots of those people are disappointed in the pro-business "status quo" politics of Hillary Clinton and the Democratic Party.

After the elections, large numbers of people identify with socialism in a way nobody would have thought possible even two years ago. This explains the marked increase in the number of people looking to join socialist organizations--an unprecedented development.

For many, these developments raise big questions--not just how to make our movements more effective in beating back Trump's agenda, but also how to find a political vehicle that truly represents our interests.

If Hillary Clinton and the mainstream Democrats don't represent us in the U.S. political system, what should we do? Find more progressive Democrats to back as a way of pushing the party in a less pro-business direction? Or give up on the Democrats and look to create independent electoral alternatives?

A RECENT article by Jared Abbot of the Democratic Socialists of America (DSA) gives a particular answer to these questions: "Social-movement work alone...is not enough. Achieving real power means having power over decision-makers. This means getting people elected to public office who will be accountable to poor and working people."

The article makes the case for supporting both local Democrats as well as independent candidates "who will be accountable to a democratic socialist agenda."

This perspective fails to differentiate between running truly independent candidates and supporting Democrats. The former, under favorable conditions, do contribute to the building of a left alternative, but the other strategy works in quite the opposite direction. 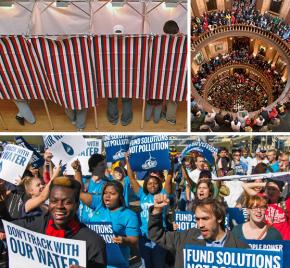 This is no surprise, given that DSA has, since its founding in 1982, been a staunch supporter of a strategy, now pushed by Sanders, of moving the Democratic Party leftward, rather than building something independent of it.

Ironically, the last time whole sections of the left were won over to a project of transforming the Democratic Party was at the end of the period of 1960s and 1970s--at the precise moment when the party was retreating from "Great Society" liberalism and adopting what became known later as neoliberalism.

In the words of left-wing author Mike Davis in his book Prisoners of the American Dream, "The ascendancy of electoralism on the left, far from being an expression of new popular energies or mobilizations, was, on the contrary, a symptom of the decline of the social movements of the 1960s."

In its zeal to take advantage of undoubtedly positive side of the Sanders campaign--opening up a space for socialism--DSA forgets the negative side: that Sanders has done everything in his power to draw his supporters back toward the Democratic Party, even positively campaigning for Hillary Clinton in the presidential race.

Experience shows that the Democratic Party changes you, and not you it. Leftist backers of the Democrats have invariably played a role--regardless of their intentions--of convincing those who the party fails to represent away from leaving its fold, rather than pushing it in more progressive directions.

A more sophisticated argument comes from Jacobin editorial board member Seth Ackerman, who insists in a recent article that it is possible to build an independent political alternative and at the same time utilize Democratic Party ballot lines to get socialists on local tickets.

In this way, he claims, socialists can avoid the stigma of being "spoilers," while at the same time gaining access more easily to electoral opportunities for the left.

The first problem with this argument is that once you've accepted the idea that you cannot be a "spoiler"--that is, candidates on the left who might draw votes from the Democrat and cause a Republican to be elected--you have already given up the ghost.

Except in some select contests, our side will not be instantaneously relevant enough to prevent a spoiler problem from the outset. In practice, this becomes an excuse for not building independently.

If you stand up to publicly criticize the party, the apparatus will thwart you, whether at the local or national level. If you are willing to compromise and accommodate in order to gain the ballot line, then you aren't building something truly independent.

AS IMPORTANT as independent electoral politics is, we shouldn't lose sight of two important factors.

One is that electoral campaigns require a great deal of patient and difficult work--and lots of money. The two-party system erects many barriers to independent politics, and therefore the left, as it grows and takes new shape, should consider carefully how to go about doing this in a way that does not burn out our forces, with little to show for it.

The second point regards the question of what is political power and how it is achieved. Those who elevate electoral politics above popular struggles forget the order of events throughout our class's history.

For example, the defeat of Jim Crow segregation--expressed by changes in the law--came at the end of a series of mass protests and mobilizations lasting for almost two decades. It was this political activism that brought about an end to legal segregation, rather than the movement finding the "right" candidates and officeholders to do it for them.

For Marxists, the greatest influence on politics comes from mass action and organization. Strikes--and in particular, large ones--are crucial because they attack the lifeblood of capitalism: profits based on unpaid labor. But all forms of protest--from mass demonstrations, to picket lines, to sit-ins and blockades--help to build the power necessary not only to effect reforms, but to generate the momentum necessary to challenge the system as a whole.

This is true not only because mass action holds the greatest promise of success, but also because it is only in and through struggle that ordinary people--usually convinced that they amount to nothing in world affairs--find the confidence and courage to reorder the world.

POLITICS IS ultimately about state power. But it would be a cruel illusion to think that winning office is the equivalent of having control of the levers of state power under the current system.

The reason that elections, Congresses, parliaments and assemblies don't constitute the sum total of politics is because political power does not actually reside in these bodies the way people often think.

The state is more than its elected officials. It is also vast bureaucracies, the court system, the police and the army. The state arose, seemingly above society--deliberately sustaining the illusion that it "stands above" it and attends to the interests of all--as a means to administer a society that had become divided into exploiting and exploited classes.

As Marx's collaborator Frederick Engels bluntly put it, even "the modern representative state is an instrument for exploiting wage labor by capital."

We have now had centuries of experience with the representative state under conditions of capitalism, and experience entirely underscores this truth: No matter what parties dominate the elected portions of government, the state acts more or less, to quote the Communist Manifesto, as the "executive committee for the management of the common affairs of the bourgeoisie."

This is not an argument against building an electoral expression for social struggles and movements. If a genuine left-wing independent party existed and was capable of fielding candidates nationally, socialist politics could reach a far larger number of people in the U.S. and help widen the scope and influence of our movement.

Based on their experience of the 1848 revolutions, Marx and Engels were clear on the importance of the working class having its own political party to represent its interests in representative bodies:

Even when there is no prospect whatsoever of their being elected, the workers must put up their own candidates in order to preserve their independence, to count their forces, and to bring before the public their revolutionary attitude and party standpoint. In this connection they must not allow themselves to be seduced by such arguments of the democrats as, for example, that by so doing they are splitting the democratic party and making it possible for the reactionaries to win.

That is to say, while elections are important for "counting our forces," we mustn't forget that this isn't the same as deploying those forces in a revolutionary contest for power.

Why the NGOs won’t lead the revolution

How free is “free” labor?