The movement needs to invite debate

What issues are involved in the decision of an SJP chapter to rescind an invitation to an independent journalist? Eric Ruder looks at how solidarity activists can move forward.

CONTROVERSY ERUPTED on the left after a recent decision by the University of North Carolina Students for Justice in Palestine (UNC-SJP) chapter to rescind an invitation to independent journalist Rania Khalek to speak on the issue of Palestine and Black liberation.

Khalek is known for her reporting on Israeli apartheid, the noxious current of Islamophobia running through U.S. politics, and the adoption of Israeli methods of repression by U.S. police departments, among other topics.

But she has been sharply criticized, including by SocialistWorker.org, for her writings on the revolution in Syria and the Assad government's war against it. In numerous articles, Khalek has depicted the opposition to the Assad regime as puppets of U.S. intervention, while downplaying or excusing atrocities committed by the Syrian government and its international allies.

After receiving much feedback and after careful consideration, we have decided to cancel tomorrow's event with Rania Khalek. We do not endorse nor reject her views on the Syrian civil war, as they remain relatively unclear according to our members' diverse opinions of Rania's analyses. 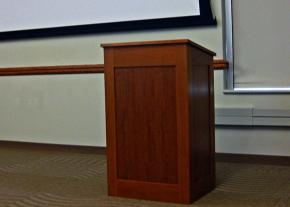 After the chapter announced its decision one day before Khalek's scheduled appearance, a group of activists assembled and circulated a statement entitled "Against the Blacklisting of Activists and Writers," with about 100 signatories.

The statement objects to the cancelation for being "based on the notion that there is a political litmus test of views on Syria that are requisites to have a public voice in the Palestinian rights movement." It also notes that "some of those who lobbied UNC-SJP to cancel the event have stated publicly that they want to destroy Khalek's reputation and livelihood."

THE DEBATE about UNC-SJP's decision quickly spiraled into a bitter battle among Palestine and Syria solidarity activists.

This may have been inevitable given the highly polarized disagreement. Khalek's supporters believe her position on Syria is being used as an excuse to "blacklist" her, while defenders of the Syrian revolution think she has crossed a line with her virulent denunciations of opponents of Assad.

Below, I want to propose some guidelines for an approach that can hopefully be productive.

1. The left must aim to debate even bitter arguments--and not, under any circumstances, resort to threats or actions against the ability of left journalists, bloggers and activists to make a living.

On almost any other question but Syria, few of the activists on either side of the debate would disagree with Khalek's journalism.

It is her reporting on the civil war in Syria that has generated fierce controversy. And it should. We at SW have been highly critical of Khalek's implicit apologies for the Assad regime and blanket condemnations of Syrian revolutionaries as pro-U.S. imperialism.

Khalek has suggested that U.S. sanctions are responsible for the humanitarian crisis in Syria, when it is the Assad dictatorship that has been the cause of the vast majority of the death and suffering.

Khalek's article "How U.S. Support for Syrian Rebels Drove the Refugee Crisis That Trump Has Capitalized On" draws on dubious research to imply that all opponents of the Assad regime are Islamic fundamentalists, with backing from the U.S. and Saudi Arabia.

This inexcusably ignores the actual history of the popular rebellion in Syria that began in 2011 as part of the Arab Spring uprisings, but was ruthlessly repressed by the Assad regime. Syria's uprising has been all but crushed, but genuine revolutionaries in the Arab world are capable of opposing both the U.S./Saudi camp and the Assad/Russia/Iran/Hezbollah camp.

It's tragic that Khalek has used her journalistic platform and social media presence to, for example, participate in a smear campaign against the White Helmets, which provides ideological cover for the regime's actions.

These positions should be adamantly challenged. Yet the statement condemning the UNC-SJP's cancelation points out--with justification--that some who campaigned in favor of disinviting Khalek have sought "to destroy Khalek's reputation and livelihood."

"I will never stop," tweeted Oz Katerji, one of the people who supported UNC-SJP rescinding its invitation. "Not with any of you. I will never rest while you are given platforms or publishing opportunities."

This approach mistakenly shifts the emphasis away from exposing and defeating Khalek's wrong arguments and analyses, and toward attacking her ability to have her views heard at all and even earn a living. These tactics can't be accepted as a legitimate means of fighting for what's right.

2. UNC-SJP had the right to rescind its invitation to Rania Khalek.

The statement in defense of Khalek characterizes UNC-SJP's decision to rescind its invitation as "blacklisting." This is wrong.

No one is owed a platform "just because," and every organization has the right to decide who it wishes to invite to appear at its events--including the right to disinvite people.

The UNC chapter of Students for Justice in Palestine was therefore correct to cancel Rania Khalek's talk. It was not a matter of "censorship" or a "blacklist." While she certainly has the right to speak, no student group is obliged to sponsor her. It was an appropriate ethical and strategic decision, and they should not be attacked for it.

Unfortunately, this is not how UNC-SJP explained its decision to disinvite Khalek.

The chapter stated that its own members have "diverse opinions of Rania's analyses." This suggests that rather than acting on the basis of a principled opposition to Khalek's ideas, the chapter decided to duck the question after facing opposition for having invited her in the first place.

This is unfortunate and veers close to the idea that Khalek's views on Syria should be banned, rather than debated--or, worse, simply tossed aside to avoid "controversy."

Given that the chapter itself appears divided regarding the various debates surrounding Syria, it would have made more sense to invite someone to join the panel in order to fully air the various points of view regarding the Assad regime, the Syrian revolution, and their relationship to the struggle in Palestine.

3. Criticism of Khalek's views on the Syrian revolution shouldn't be dismissed as a misguided political litmus test.

Khalek's defenders argue that "a group seeking justice in Palestine [that] subjects speakers or members to a political litmus test related to their views on Syria...inevitably leads to splits, silencing, confusion, and a serious erosion of trust."

Some go even further, arguing that those who raise opposition to the Assad regime in the context of Palestine organizing are helping to advance a Zionist plot to divide and demobilize the solidarity movement.

This is a dangerous slander. Since the earliest days of the Syrian uprising, this issue has divided the Palestinian movement because of real differences of opinion. Some consider the Assad regime "anti-imperialist" and a supporter of Palestinian liberation, while others--including SocialistWorker.org--have long pointed out how Assad manipulated the Palestine issue for his own purposes.

Budour Hassan is one of many Palestinian activists who once held the view that the Syrian uprising represented a "threat" to the Palestinian cause, only to revise her views after witnessing the unspeakable brutality of the Assad regime in repressing a movement fighting for the same liberation and dignity that Palestinians demand.

It's a grave mistake for the Palestine solidarity movement to align itself with a dictator, even if that dictator occasionally expresses support for the Palestinian cause. This approach truly does lead to an "erosion of trust"--by placing Palestinian activists on the wrong side of a struggle between a dictator and the people he ruthlessly represses.

Such a position frustrates the potential for solidarity between the Palestinian and Syrian liberation movements, which should aim to forge solidarity from below against all dictatorships and international powers.

If SJP chapters choose not to invite Khalek and other apologists for Assad because they feel that this strategy undermines the Palestinian struggle, it is their right to do so. Ultimately, it would be good for the movement to reject support for Assad, because it is counterproductive to the cause of Palestinian liberation.

But it is also dead wrong to try to advance this argument by avoiding engagement with Khalek and others who share her views--still worse with any form of a ban.

Defining such views as "unacceptable" does nothing to advance the debates and discussions that are critical to building a more sophisticated and more united movement against empire and dictatorship.