ANOTHER SHOOTING of police officers--this time in Baton Rouge, Louisiana--is dominating the news and feeding a pro-police backlash in the media and among political leaders. But we can't let the tide of propaganda stop us from protesting the epidemic of police violence in the U.S.--and demanding an end to it.

Three officers are dead, another is critically injured, and three are less seriously hurt. The gunman, who was killed by police at the scene, has been identified as Gavin Long, a 29-year-old African American man from Kansas City, Missouri, who was honorably discharged from the Marines in 2010. Less than two weeks ago in Dallas, Micah Xavier Johnson, another Black military veteran, shot and killed five police and injured several more.

Within hours of the Baton Rouge shootings, Barack Obama took to the podium to call on Americans to join together. "We as a nation have to be clear that nothing justifies violence against law enforcement," said Obama. "Attacks on police are an attack on all of us, and the rule of law that makes society possible." 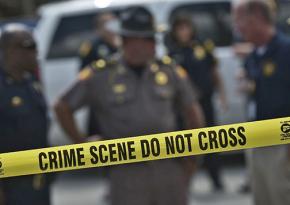 The central thrust of Obama's message was this: "It is so important that everyone, regardless of race or political party or profession; regardless of what organization you are a part of; everyone right now focus on words and actions that can unite this country, rather than divide it further."

IT MUST be said outright: Obama's words ring hollow.

Why haven't police killings of African Americans drawn condemnations like this? Why doesn't the harassment, abuse and murder of Black and Brown people by cops qualify as an attack on "the rule of law that makes society possible"?

Obama's call for unity will leave African Americans, who bear the disproportionate brunt of police violence, wondering if and how this "unity" includes them.

Yes, two high-profile killings of police have taken place in the last two weeks. But for decade upon decade, the violence of the U.S. justice system directed against people of color by police has been the rule.

There are the outright extrajudicial executions of young Black men going back many decades. And for each of those murders, there are countless more injustices, symbolized by the NYPD's stop-and-frisk campaign and similar racial profiling that takes place in every big city.

The cops are just one face of the injustice system. There are all the Black and Brown people abused or dead at the hands of prison guards. Or suffering or dying due to medical neglect behind bars. Or disrespected, beaten or even tortured at a local police precinct, with the connivance of prosecutors.

The very ordinariness of all this violence, meted out at every level of the injustice system, has made it mostly invisible. Until now.

The eruption of the movement against state-sanctioned violence in the last couple years is long overdue, and the last weeks have produced a renewed surge, despite the pro-police backlash after Dallas and now Baton Rouge.

Actions have taken place in at least 70 different cities in the weeks since videos of the police killings of Alton Sterling in Baton Rouge and Philando Castile in St. Paul, Minnesota, hit the internet and went viral.

THE CORPORATE media's round-the-clock coverage that invariably follows mass shootings of any kind sympathizes with the fear and grief that so many people feel about such events. Yet reporters and commentators routinely abandon the veneer of objectivity to express their support and even admiration for the police--individual police officers as well as the institution itself.

That's especially the case when the cops themselves are doing the talking. For example, former NYPD officer Eugene O'Donnell has appeared regularly on MSNBC--considered the more liberal of the cable TV news networks--as a commentator on events involving police and mass shootings.

One of the talking points that O'Donnell repeatedly voiced during coverage of the Baton Rouge shootings was that "the most vulnerable among us" are the ones "who will be hurt in the long run" by the killing of police--because they, more than others, rely on the police to protect and serve them.

But this turns the reality of police and policing on its head.

The fact is that the police serve and protect the status quo of our society--with all of its attendant inequality and all of its prejudices regarding who are the criminals and who are the innocent victims.

The police don't aggressively pursue the countless employers who perpetrate wage theft each and every year, to the tune of $20 billion. The cops don't tirelessly investigate white-collar crimes that account for some $400 billion in annual losses. They don't track down companies that expose their workers to toxic chemicals in violation of health and safety laws.

Instead, they appear long after those crimes are committed--to patrol the neighborhoods to which the poorest people in society are consigned as they try to scrape by.

People who are made desperate by desperate circumstances will do desperate things. They are the cops' main targets, to judge from any number of statistics on arrests, prosecutions and imprisonment.

Yet the economic elite commit crime, too--often times, far more damaging ones. But they employ means that don't attract the attention of police in the ways that crimes of poverty do.

DESPITE THE continuing protest and the prominence of Black Lives Matter, even in the mainstream political debate, the pace of killings by police this year hasn't decreased compared to last year. It's increased slightly, in fact.

So even though the media lecture us that police are more hesitant to do their jobs because of all the scrutiny they face, that scrutiny apparently hasn't made them hesitant enough when it comes to killing the people they are supposedly protecting and serving.

Yet activists are still under enormous pressure--to quiet their rhetoric and moderate their demands to help promote "healing."

But healing will only happen if the movement against racism and police violence continues to advance its demands, increase its numbers and act in ways that can put pressure on the system.

The shootings of police in Dallas and Baton Rouge have given momentum to those calling for more aggressive policing and enforcement.

At a moment when the militarization of police has been under scrutiny following the zealous use of military hardware in Ferguson, Missouri, and elsewhere, the attacks on police have provided law enforcement and the politicians eager to demonstrate their "tough-on-crime" credentials with the ideal justification for continuing to add armor, tactical assault vehicles, drones, robots and other hardware to their already substantial arsenals.

So the movement to defend Black lives has its work cut out for it.

We must demand an end to the militarization of policing. We can't forget the acquittals of--or even the failure to indict in the first place--the officers who killed Sandra Bland, Tamir Rice and Freddy Gray. So we must continue pushing for police murderers to be brought to justice.

And most of all, we can't allow the calls for "unity" and patience to stop us from raising our voices--in the streets, at police review board hearings and everywhere else--for justice.