Reflecting on the Juneteenth anniversary

June 19 is the 150th anniversary of Juneteenth, which is remembered as the official date of the abolition of slavery after the Civil War in 1865. What has the Black freedom struggle accomplished since then? We asked three Socialist Worker contributors for their thoughts.

To answer the question "How free are Black people today?" we have to clarify which Black people we mean. The ascendance and visibility of a larger Black elite encourages the perception that everything has changed. Those who know better are tempted to assert the opposite--that nothing, or that very little, has changed.

Nearly half of the 2.3 million American prisoners are Black, and more Black men are under the supervision of the criminal justice system than were slaves in 1850. Contemporary lynch mobs wear uniforms and badges, and are just as lethal. Rather than a smooth curve bending upward toward progress, the Black struggle is more of a back-and-forth contest--with victory and defeat closely connected. It cannot be otherwise in a society based on exploitation.

If we conclude, however, that this means Black people stand apart in history and cannot ever win, then we misunderstand what's at stake. From the perspective of the elite, Black rebellion is a real danger. Not because 13 percent of the population might get out of hand, but because their struggle threatens to set others in motion. 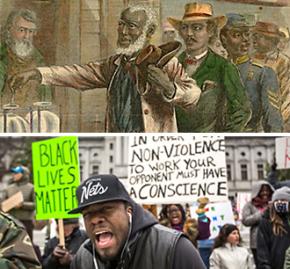 That is one pattern of U.S. history. The slaves who turned the American Civil War into a revolutionary war of emancipation also made possible the first stirrings of a labor movement in this country, and as freed people, they radically democratized the South. In the 1960s and 1970s, the civil rights and Black Power struggles inspired students, soldiers, workers and other oppressed people to organize themselves in their own interests.

We know in hindsight that defeat loomed in both cases. Reconstruction was crushed and Jim Crow rose. The War on Poverty was replaced with the "war on drugs." Time and again, Black people in struggle were thwarted, and alliances broken up.

The crucial thing is that they had to be thwarted. Each time Black people have risen up, campaigns of hysteria and violence have been necessary to put down their revolt, separate them from allies and, in so doing, forestall deeper social change.

Today, mass incarceration and ultra-violent policing attempt to literally cage the rebellion or kill it, and the criminalization of Black people cuts them off from allies. But mass incarceration and policing also lay the basis for a mass struggle. The next round of the contest is coming, and with it, an opportunity to pursue deep structural changes that are long overdue.

While it is true that Black people are no longer forced to do labor for free while in bondage, and Jim Crow and lynching have been outlawed, the absence of these things--the worst parts of American society and history--does not equal freedom for Black America.

Free labor, or at least near free labor, still exists within the prison system, representing a new form of state-sanctioned bondage, forcing us to rethink what constitutes labor, particularly within the carceral state. While slavery has long since been abolished, the U.S. accounts for 25 percent of the world's prison population, by far the largest in the world, with overwhelmingly disproportionate number being Black men. Many prisoners--55 percent of federal prisoners, for example--are serving time for low-level nonviolent offenses, including low-level nonviolent drug offenses).

Of course, in typical American capitalist fashion, the state has figured out how to profit off imprisonment, as well as to keep those entering the prison system under its supervision through fines and restitution fees. Furthermore, in the case of localities like Ferguson, Missouri, working class and poor people are issued tickets, often multiple times, for petty offenses like traffic violations, and they risk jail time if these fines are not paid.

Hand in hand with clear instances of economic disenfranchisement in cities and small towns all over Black America, there is the epidemic of police brutality, harassment (sexual or otherwise) and extrajudicial killing of Black people across gender lines, which sparked the Black Lives Matter movement.

Black Lives Matter did not appear in a vacuum, but within the context of a growing awareness of, and resistance to, police killings of young Black people with impunity. The continuity of this movement can be traced back to the Trayvon Martin case, but it goes back further to the fight against the execution of innocent Georgia death row prisoner Troy Davis and the Jena Six trial--with the backdrop of an economic crisis that has devastated Black America, and which ordinary Black people are still struggling to recover from.

So it shouldn't be any surprise that this movement for Black lives has sprung up in the last year. More and more Black people have come to the conclusion that if Black lives are not valued in our society and if our voices are all too often silenced, then we are not yet truly free, despite the historic struggles of our ancestors, our parents and grandparents.

Because of the gains of the civil rights movement and the Black Power movement, we are undoubtedly in a better place in terms of winning a world where Black people are truly free. But if the civil rights and Black Power movements have taught us anything, it is that under capitalism, there will always be forces that will try to roll back any gains made through struggle. Therefore, in order to transform society, we must uproot the very foundations of class society, and the racism and exploitation at its core.

Speaking at a performance in 1972, the legendary artist Gil Scott Heron said, "It's an election year, and once again, Black people are running--for their lives."

His words ring true decades later. As election time approaches, there is a great contrast between the official fanfare greeting presidential nominations in the self-described "greatest democracy on Earth," and the increasing crackdown on the exercise of the democratic right of protest--particularly against racism.

While the assault on civil liberties is nothing new and hardly restricted to Black people--as many Muslims and immigrants unfortunately know--the people who run this country are hoping to make the rising Black Lives Matter movement an opportunity for a new era in state repression.

It is as though the response to the movement in cities across the country is meant to remind us what the police are for in the first place. If the actions of city governments and their police--firing tear gas in Ferguson, conducting mass arrests in Baltimore, declaring a "wartime" footing in New York City--don't speak loudly enough, there are their words: Recall the police calling protesters "fucking animals" in Ferguson, and a mayor calling them "thugs" in Baltimore.

If this evidence of the repression "our democracy" is unleashing on Black people doesn't present a clear enough picture of the assault on Black America, one can look to the situation that inspired the protests: The daily reality of police harassment, shootings and arrests of Black people all across the country; the City Halls and courts that defend and affirm the murder and mass incarceration of Blacks; and the dire economic reality of joblessness, debt, home foreclosure and the elimination of public services from Black neighborhoods--except for the "service" of policing.

So how free are Black folks 150 years after slavery? Nowhere near free enough. The situation for Black people is obviously better than at its lowest point--in the era of slavery. But it is far from the high point many hoped for with Barack Obama's election.

The freedoms that we do enjoy have not been given by a benevolent "American democracy." They have been clawed away from a racist state that kept us enslaved for the first 90 years of its existence. The struggles that won these rights shook the system again and again, but that system has survived with racism at its heart--even as a Black man presides over it.

But if the situation is dire, it is also hopeful. The advent of the Black Lives Matter movement gives us the greatest opportunity in a generation to mobilize the only force that won the rights that we do have: the mass struggle of organized, ordinary people.

Not only are Black people running for our lives, but we are fighting for them, too. With the development of a new generation of radicals, we have a new era in which to revisit an old discussion: The struggle for Black freedom, and its centrality to the freedom of all oppressed people.