A war of terror and hate

The U.S. war on ISIS in the Middle East has rehabilitated the "war on terror" at home.

IT'S THE 21st-century version of the old military recruiting poster: Uncle Sam wants you...to hate Muslim "extremists" and trust him to go to war again.

That's the message of the propaganda onslaught for the latest chapter in the never-ending "war on terror," coming from Democratic and Republican political leaders alike and parroted by the media.

The U.S. military is once again dropping bombs on Iraq--and now Syria, a newcomer to the list of targets--in a war against the Islamic State in Iraq and Syria (ISIS).

The hypocrisies have multiplied with each air strike. ISIS arose as a direct consequence of the U.S. occupation of Iraq and the disaster that imperialism caused in the Middle East. Washington's celebrated Arab allies in the assault on ISIS are authoritarian regimes every bit as barbaric and oppressive as ISIS. The sectarian conflict between Shia and Sunni, officially decried in Washington, is being further aggravated.

This new stage of the "war on terror" will only make the chaos and violence worse. But the reactionaries of ISIS, with their barbaric beheadings of hostages and violence directed at religious and ethnic minorities, are so abhorrent that the masters of the U.S. empire find themselves in an unfamiliar position, at least in the recent past: Their new war is broadly popular, at least for now. 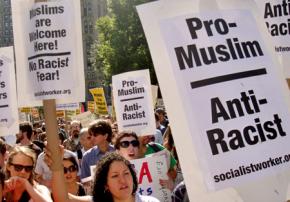 The U.S. political and military elite has a golden opportunity to rehabilitate the image of imperialism, tarnished by its failures in Afghanistan and Iraq, the lies and deceptions spun as excuses for war, and the trail of massacres and atrocities stretching around the world.

The commanders and cheerleaders of imperialism are counting on outrage at ISIS to overcome people's questioning of the "war on terror" based on a decade of grim experience. This makes it all the more important for those individuals and organizations who don't buy the propaganda to raise their voices and say the truth.

EVERY WAR overseas is accompanied by a war at home. During the U.S. "war on terror," the brunt of that war at home has fallen on Arab Americans and Muslims--and suspicion and bigotry is being wound up again as the war on ISIS takes off.

There was a particularly awful example last week following workplace violence at a food processing plant in Moore, Okla. After he was fired from the Vaughn Foods facility, Alton Nolen went to another building and began attacking workers at random. He beheaded one of his victims before he was shot.

The killing was horrific--not just the gruesome beheading, but the fact that Nolen lashed out at fellow employees who had nothing to do with his firing. But of course, the manner of the murder immediately focused attention on Nolen, who was revealed to have recently converted to Islam.

Professional Islamophobe Pam Geller, whose group has funded racist subway and bus ads in cities across the U.S., immediately proclaimed on her website, "The Islamic ritual slaughter of beheading has moved past Iraq, Syria, Algeria, Philippines and into the streets of London and now the American workplace."

Such a message is an incitement to treat all Muslims, or anyone who might "look Muslim," as a potential terrorist--even though there is zero evidence to connect this crazed act in Oklahoma with either ISIS half a world away or with Islam itself, as even the FBI declared in a statement.

This is just the latest example in a wave of scaremongering about ISIS terrorism supposedly reaching U.S. shores.

Earlier this month, a Colorado teenager named Shannon Conley pled guilty to a reduced terrorism charge. The young woman, a recent convert to Islam, reportedly engaged in an online relationship with a man claiming to be an ISIS fighter--and planned to travel to meet him, when she was stopped and arrested last April. Her case is one of several that kindled a mini-media frenzy about ISIS supposedly preying on love-struck "schoolgirl jihadis."

All this fits a very old pattern of imperial scapegoating: the hunting of an "enemy within" to justify war without. Just as Communists and immigrants and radical Black activists once were, Muslims and Arab Americans are the shadowy menace--and everyone is suspect.

Racial and religious profiling is the rule in the "heightened security" apparatus constructed since the September 11 attacks. After all the untold billions spent in the name of protecting U.S. citizens from "terrorism," the main "success stories" in the domestic front of the "war on terror" are examples of racist scapegoating and entrapment of the most vulnerable.

One example: The case of the "Newburgh Four," who were accused planning to attack New York synagogues. The "plot" was largely suggested by an FBI informant, and none of the four ever had access to weapons, except those helpfully supplied by the FBI. Yet they were convicted and sentenced to 25 years in prison each.

Miscarriages of justice like this are so grotesque that it's hard to believe anyone bought the wild accusations. But U.S. history shows that fear-mongering has been a constant and often effective tool of the American ruling class.

"Evidence-wise, we had them beat," David Williams, one of the Newburgh Four, explained to the Village Voice. "We got convicted on feelings. They [the prosecutors] started talking about 9/11...and we got convicted on that. Once you put 'terrorist' in front of anything, it's like being charged with rape or child molestation. Once a jury hears that you're accused of a certain type of crime, you're already guilty."

ACCORDING TO Obama and other political leaders, ISIS represents a unique threat. "There can be no reasoning--no negotiation--with this brand of evil," he said in a speech to the United Nations. But this sort of demonization--conjuring up special "brands of evil"--has a long precedent in U.S. history.

Back in the early days of U.S. imperialism, politicians and the media invented crude provocations to justify intervention in the Philippines, Cuba and Puerto Rico, where American forces carried out the wholesale slaughter of indigenous populations. All this was done, according to President William McKinley, "not as invaders or conquerors, but as friends, to protect the natives in their homes, in their employments, and in their personal and religious rights."

More recently, Iraq's Saddam Hussein became the villain of the moment, accused of harboring weapons of mass destruction and employing torture chambers against dissidents. When the U.S. wanted to go to war on Iraq, he was portrayed as a vile dictator, called the "new Hitler" and denounced for invading "poor little Kuwait," where his soldiers pulled infants from hospital incubators, according to a completely false story that circulated during the first Gulf War in 1991.

But only a few years before, Saddam had been a valued ally, who the U.S. increasingly backed in the murderous war between Iran and Iraq in the 1980s. That's why there's such a chummy photo of Donald Rumsfeld meeting with Saddam in Baghdad in 1983 on behalf of the Reagan administration. And those chemical weapons that Saddam was later condemned for possessing? It turns out that Rumsfeld may have helped Iraq obtain them.

Back then, the U.S. had no problem with Saddam's torture chambers--and, of course, after Bush Jr.'s invasion finally toppled the ally-turned-enemy, the U.S. made use of them. The U.S. didn't object to the methods of the "Butcher of Baghdad" until he disobeyed his U.S. masters with the invasion of Kuwait in 1990. That's when the U.S. government, with control of Middle East oil foremost in mind, turned on its former ally.

No U.S. politicians have appeared in photo ops with ISIS leaders. But there are connections to Washington that deserve to be examined so long as Obama is talking about ISIS and its particular "brand of evil."

The U.S. made use of the radical Islamists who represent ISIS's political ancestors back in the 1980s as a proxy army against the USSR after it invaded Afghanistan. The al-Qaeda network once headed by Osama bin Laden gained its first military experience in the U.S.-financed mujahedeen, which Ronald Reagan celebrated as "courageous freedom fighters."

More recently, U.S.-backed Arab regimes--the very ones now participating in the U.S.-led war on ISIS--provided financial and material support to hard-line fundamentalist groupings in Iraq, Syria and elsewhere, as a Sunni counterweight against the growing strength of the so-called "Shia Crescent" led by Iran.

ISIS is utterly reactionary, committed to an oppressive vision of undemocratic rule over Sunnis and non-Sunnis alike. It is certainly no opponent of imperialism. "It went almost unnoticed that the self-obsessed, religion-crazed group issued not a word of condemnation of Israel or of solidarity with the Gazans during the recent Israeli assault," wrote Belfast Telegraph columnist Eamonn McCann. Opposition to Israel, the main ally of U.S. imperialism in the Middle East, doesn't seem to be part of the ISIS agenda.

But the actual facts about ISIS--its origins, its reactionary politics, its real aims--don't matter to the Obama administration.

In ISIS, the U.S. has found a perfect enemy, one that can be exploited to repair and rebuild support for the empire. In addition to providing the perfect foil for the U.S. to carry out new interventions, the ISIS threat will be used as justification for bolstering the surveillance state--a badly needed boost for Big Brother after the revelations of government spying from former NSA contractor Edward Snowden.

Scapegoating serves a further purpose beyond the wars at home and abroad--of shifting attention from the crimes that affect the lives of working people around the country every day: poverty, unemployment, the disastrous health care system. Opposing U.S. imperialism is an integral part of fighting for the social priorities we need at home.

Everyone who cares about social justice, no matter what the issue--racism and police violence, immigrant rights, labor, ecological justice--must see how this attack on Muslims and Arab Americans is connected to their own struggle, and stand strong against the rehabilitation of the "war on terror" at home and abroad.