Paul D’Amato asks whether U.S. labor law is as progressive as it's made out to be.

A JULY 17 New York Times editorial, headlined "Halfhearted Labor Reform in Bangladesh," laments the inadequacy of that country's recently passed labor law, noting that the "changes fall far short of what is needed."

Among those weaknesses, in the Times' opinion, is that the law "sets ridiculously high hurdles for workers who want to unionize." As it enumerates some of these hurdles, the editorial compares these weak laws unfavorably with labor laws in the U.S.--which, we are to presume from this editorial, are much better than in Bangladesh.

In Bangladesh, a union won't be recognized unless 30 percent of a company's total workforce petition for one, whereas in the U.S., "30 percent of workers at an individual factory can petition to establish a union." The article continues:

The laws are restrictive in other ways, too. Unions will not be permitted in factories in special export zones, where many plants that cater to Western companies are based. More than two-thirds of union members would have to authorize a strike (in the United States, a simple majority usually suffices). The government would also have the right to stop any strike it determines to be a "serious hardship to the community" or is "prejudicial to the national interest," according to Human Rights Watch. 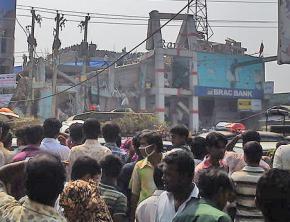 No doubt these are all onerous restrictions on workers' rights in Bangladesh. But do they compare unfavorably with the rights of workers in the U.S.? The truth is that U.S. labor law is extremely restrictive of workers' rights to form unions, to strike and to boycott.

THE PERIOD after the Second World War in the U.S. witnessed a sustained effort by employers and the federal government to reverse the gains that workers made had made in the 1930s, and to impose tough restrictions on workplace and collective-bargaining rights.

The 1947 Taft-Hartley Act, which is largely still in effect today, outlaws wildcat strikes (strikes not official authorized by a union), solidarity strikes, political strikes, secondary boycotts, secondary picketing, mass picketing and closed shops. In addition, it permitted states to pass their own "right-to-work" laws, which now apply in 24 states, mostly in the South, but also including Indiana and Michigan.

Under Taft-Hartley, unions must give 80 days' notice to the employer and to the government before engaging in a strike in pursuit of a collective-bargaining agreement. In addition, Taft-Hartley gives the government the right to prevent or suspend a strike if it is deemed to imperil national safety or health, and it gives presidents the right to intervene in a strike if it is deemed to cause a national emergency. Finally, Taft-Hartley permits employers to deploy anti-union propaganda in the workplace.

In 39 states, public employees have no legally protected right to strike. Federal government employees do not have the right to strike. Under New York's Taylor Law, it is illegal for transit workers in New York City to strike. The Illinois legislature recently passed a law requiring a 75 percent majority for Chicago teachers to call a strike (they managed to win a strike vote anyway last fall). Under a precedent established in 1937, employers have the right to permanently replace striking workers.

Moreover, judges and courts throughout U.S. history have imposed anti-strike injunctions. In 2009, to cite a recent example, a Los Angeles Superior Court Judge barred a one-day teachers' strike, issuing a restraining order against the union that included threats of fines that would bankrupt it.

U.S. employers have been on an offensive against workers and their unions for several decades. The current offensive kicked into high gear in 1981 with President Ronld Reagan's firing of striking members of the Professional Air Traffic Control Organization (PATCO), who had been under an injunction barring their right to strike since 1970.

Since then, states, cities and presidents have routinely invoked legal injunctions and Taft-Hartley to prevent or stop strikes. Bill Clinton used the Railway Labor Act (a 1926/35 law designed to stop railroad workers' strikes) to bar several strikes on railroads, and George W. Bush invoked Taft-Hartley during a 2002 lockout of West Coast dockworkers.

The U.S. has an unparalleled history of violence against workers and legal constraints on workers' rights--facts that make the New York Times editorial's comparison of Bangladeshi labor law with U.S. labor law an unfortunate one.