The government's spying and security apparatus has been expanding its powers under Republicans and Democrats--at the expense of all our rights, explains Alan Maass.

THE SHADOWY and secretive National Security Agency (NSA) has been exposed to the light of day by revelations that show the vast extent of U.S. government spying, at home and around the globe.

The truth about two outrageous surveillance programs--apparently run for years by the world's biggest spying agency with the support of Democrats and Republicans alike--has been revealed to the world in back-to-back exposés in the Guardian and other publications.

Under one program, called Prism, the NSA has gained access to the systems of Google, Facebook, Apple, Microsoft, Yahoo, Skype and other giant Internet companies, allowing it to examine all kinds of information at will, including browser histories and the content of e-mails, live chats, file transfers and more.

Under the other, the National Spying-on-you Agency has apparently been collecting records for probably the majority of telephone users in the U.S. This "metadata" obtained from the biggest telecommunications companies is warehoused in a giant database that NSA analysts can "mine" for intelligence, again at will. 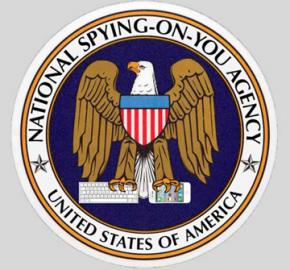 Edward Snowden has come forward to say he leaked the classified documents that were the source of these revelations. Snowden is a 29-year-old former technical assistant for the Central Intelligence Agency, who later worked at the NSA as an employee of various defense contractors.

In an interview with Guardian reporters, including left-wing columnist Glenn Greenwald, Snowden described how easily the agency can violate our rights:

The NSA has built an infrastructure that allows it to intercept almost everything. With this capability, the vast majority of human communications are automatically ingested without targeting. If I wanted to see your e-mails or your wife's phone, all I have to do is use intercepts. I can get your e-mails, passwords, phone records, credit cards.

The Washington establishment reacted to Snowden's leaks with alarm, and it's easy to see why: Revelations of the extent of NSA surveillance will shock and anger millions of people who had no idea that the government routinely and casually violates their rights, in the name of "national security" and the "war on terror."

What's more, NSA spying operations have been continuous--and may have actually accelerated--from the Bush administration to the supposed civil-liberties champions of the Obama White House. That's further proof, if more was needed, that leaders of the Democratic Party are every bit as committed as Republicans to the use of the government's repressive apparatus to defend the interests of the U.S. state. As left-wing writer Norman Solomon put it:

[T]he revelations of recent days are a tremendous challenge to the established order: nonstop warfare, intensifying secrecy and dominant power that equate safe governance with Orwellian surveillance. In the highest places, there is more than a wisp of panic in rarefied air. It's not just the National Security Agency that stands exposed; it's the repressive arrogance perched on the pyramid of power.

OF THE two most damning revelations among others--spying on Internet communications or on telephone records--it's hard to say which is more menacing.

The disclosures about phone records came first, in an exclusive Guardian feature by Greenwald. Snowden apparently provided an order from the secret court established under the Foreign Intelligence Surveillance Act (FISA) requiring telecom giant Verizon to give the NSA--on an "ongoing, daily basis"--records on all telephone calls in its systems, domestic or international.

The order covers a three-month period ending this coming July 19, but according to Senate Intelligence Committee Chair Dianne Feinstein, this was a routine renewal of a standing order in place for a number of years, unbeknownst to the public. The order leaked by Snowden doesn't say so, but there are almost certainly similar arrangements in place with other major phone companies.

"In other words," the Nation's David Cole summarized, "the federal government is apparently sweeping up records on every phone call any of us makes, without any specific basis for suspicion about any of us."

The order doesn't allow the NSA to listen to the calls, but in many ways, the records themselves are more revealing. As Ben Wizner and Jay Stanley of the American Civil Liberties Union wrote:

Even without intercepting the content of communications, the government can use metadata to learn our most intimate secrets...The "who," "when" and "how frequently" of communications are often more revealing than what is said or written. Calls between a reporter and a government whistleblower, for example, may reveal a relationship that can be incriminating all on its own.

James Ball of the Guardian pointed out another advantage to the indiscriminate vacuuming up of all phone records:

[C]ollection and storage of this information gives government a power it's previously lacked: easy and retroactive surveillance. If authorities become interested in an individual at a later stage, and obtain their number, officials can look back through the data and gather their movements, social network and more--possibly for several years.

Though it would probably surprise most people, information like phone records isn't covered by the Fourth Amendment's right to privacy--at least according to past court rulings. Nevertheless, the bulk collection of "metadata" flips upside down the standard procedures of government investigations--where law enforcement or prosecutors make their case to a judge about why they should have access to specific pieces of information about specific individuals or groups.

In effect, the NSA is saying: We'll take all the data you got now--and justify examining or using any part of it after the fact.

The NSA's Prism program to eavesdrop on Internet communications is similarly stunning in its scope and implications. In this case, Snowden turned over to reporters a 41-slide Power Point presentation apparently used to train intelligence operatives about what information they could get from Prism.

The presentation boasts about accessing information "directly from the servers" of major Internet companies--with the goal of "extensive, in-depth surveillance on live communications and stored information," the Guardian reported. "The law allows for the targeting of any customers of participating firms who live outside the U.S., or those Americans whose communications include people outside the U.S."

Thus, communications between U.S. citizens are supposedly not to be accessed. But once again, when it comes to abiding by such restrictions, NSA operatives aren't even accountable to a judge from the secret FISA court--and with Prism, they can look at not just records of communications, but the content itself.

Computer companies deny that they allow the NSA access to snoop. "If they are doing this, they are doing it without our knowledge," one executive told the Guardian. But the Prism presentation claims the program is going strong--and getting stronger. "The document highlights that the number of obtained communications increased in 2012 by 248 percent for Skype," the Guardian reported. "There was also a 131 percent increase in requests for Facebook data, and 63 percent for Google."

LAST YEAR, Sens. Ron Wyden and Mark Udall--who have bucked the Obama administration and fellow congressional Democrats in opposing the continuation and expansion of "war on terror"-era repressive policies--wrote a letter to Attorney General Eric Holder that referenced FISA court orders, like the one requiring Verizon to turn over phone records, to warn about the growing reach of the government's security apparatus:

Their point applies to the National Security Agency itself, with a staff estimated at 100,000 and an immense information-gathering network that reaches into outer space. "Satellites scoop up calls and e-mails in the ether and beam the information back to earthbound receiving stations," wrote Greenwald and other Guardian reporters. "One estimate suggests that each of these bases [vacuums] up roughly 1 billion e-mails, phone calls and other forms of correspondence every day, and the agency has up to 20 bases.

As one government official told the Guardian: "This is not science fiction. It is happening now."

It also generally happens behind a veil of secrecy--one that now has a big rip in it, thanks to Edward Snowden. But rather than answer for the spying powers they've claimed for the government, U.S. officials overwhelmingly condemned the messenger.

Director of National Intelligence James Clapper called the leaking of NSA documents "reprehensible." He lectured in a statement: "The unauthorized disclosure of a top secret U.S. court document threatens potentially long-lasting and irreversible harm to our ability to identify and respond to the many threats facing our nation."

But what Snowden has done is alert ordinary people in the U.S. and around the world to the imminent threats to their rights. He did so knowing that the U.S. government would seek vengeance. He has fled the U.S. for Hong Kong, knowing that he would not see his loved ones for a long time, if ever again.

Whistleblowers like Snowden, as one prominent political figure once put it, should be hailed for their "acts of courage and patriotism, which can sometimes save lives and often save taxpayer dollars, [and] should be encouraged rather than stifled as they have been."

If you're wondering who said that, it was Barack Obama--during his 2008 presidential campaign, when he was challenging the Bush administration's ruthless policies of shredding civil liberties in the "war on terror." But during his four-plus years in office, he's prosecuted "those same whistleblowers at double the number of all previous presidents combined," according to Glenn Greenwald.

THE BUSH-Obama war on whistleblowers is only one aspect of a common and continuous policy, spanning the two presidencies, that has checked off a number of points on any "aspiring tyrant's checklist," as Conor Friedersdorf of the Atlantic wrote:

The power to detain prisoners indefinitely without charges or trial

Ongoing warrantless surveillance on millions of Americans accused of no wrongdoing, converted into a permanent database so that data of innocents spied upon in 2007 can be accessed in 2027

Using ethnic profiling to choose the targets of secret spying, as the NYPD did with John Brennan's blessing

A torture program that could be restarted with an executive order

That's a far cry from Obama's promises in 2008 to curb the Bush administration's abusive policies and arrogant attitude that the White House was above the law--promises that helped win him the support of millions of people sickened by the Bush years, as Edward Snowden acknowledged in his Guardian interview. "I did not vote for him," Snowden said. "I voted for a third party. But I believed in Obama's promises. I was going to disclose it [but waited because of his election]. He continued with the policies of his predecessor."

Obama is hardly alone among the leaders of his party in defending the Big Brother state. With few exceptions, congressional Democrats sought to counter or quiet questioning about the NSA programs after the revelations. Senate Majority Leader Harry Reid, for example, told the Las Vegas Sun that "everyone should just calm down and understand that this isn't brand new. It's been going on for some seven years."

Then again, Reid and Obama are leaders of a party with a long record of saying one thing to win votes from working people, and then doing quite another to serve the interests of the corporate and political elite, regardless of party affiliation. As British socialist and Guardian columnist Richard Seymour wrote:

Expanding the state's ability to gather information on citizens, no matter what the justification, always increases its options...Obama's hoarding of executive power can only be understood in the context of his mission to restore American global power, rationalize its productive base, and expand the state's capacity to process dysfunctions. In this respect, his agenda is not fundamentally dissimilar from that of his predecessor, which is why he needs many of the same means.