Life in Falluja is a horror story

Dahr Jamail spent eight months inside Iraq working as an independent journalist during the first years of the occupation. As one of the few journalists not "embedded" with American forces, his reports earned a reputation among antiwar activists for being an uncompromising look at life under occupation.

In 2005, Jamail spoke to Eric Ruder about the destruction unleashed on Iraq during the occupation. This interview first appeared in the April 1, 2005 issue of Socialist Worker.

YOUR REPORTS have given a radically different view of what's going on in Iraq compared to the other media. Can you talk about what you saw?

I HAD done a little bit of journalism before, not a whole lot, and I was watching the discrepancies in reporting between the mainstream here in the U.S., and independent journalists, the alternative media and the foreign media. I grew more and more disturbed by this huge discrepancy, and so I decided to head over to Iraq to report on it myself. My first trip was in November 2003.

I was in Falluja during the April siege last year for a couple of days, and then I went back in May several times to report on what happened. But I didn't go in November, because the military cordoned off the city and maintains that cordon to this day. They're not letting any journalists in there. I've been getting information by interviewing refugees, or through some of my colleagues who have been in and out of the city several times.
Life there is horrendous. At least 65 percent of the buildings have been bombed to the ground, and what's left has been severely damaged. There's no water, no electricity and, of course, no jobs. And when people go back into the city, they have to get a retina scan and get fingerprinted, and then they're issued an ID card. 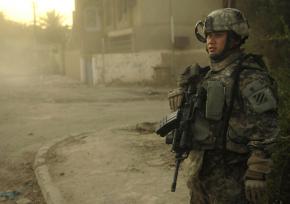 Then they go inside to find what's left of their homes, and in a really horrible situation in which the military remains in total control of the town. There are snipers everywhere, and the ambulances aren't able really to run--they're still being targeted by the military. The one remaining hospital--Falluja General Hospital--is barely functioning, because people have to go through checkpoints to get there.

Life in Falluja is really a horror story. Most of the city's residents are refugees and will continue to be refugees for quite some time. They're scattered in small towns on the outskirts of Falluja, as well as Baghdad and other cities. The last estimate I heard was about 25,000--maybe a little bit more than that--had returned back to a city that once had a population of 350,000.

WHEN THE U.S. announced its assault on Falluja, it claimed its goal was to root out the resistance. Can you talk about the strategic goal that the U.S. set for itself and also whether it succeeded?

I BASICALLY heard two reasons for going in and doing what they did to Falluja: what you mentioned, as well as another primary goal--providing "security and stability" for the January 30 elections.

What happened was that most of the fighters in the city left even before the siege began--even the military admitted to that. So of the roughly 3,000 people killed, the vast majority were civilians. Falluja was declared a "free-fire" zone for the military, meaning that they were not distinguishing between civilians and fighters, which is, of course, a violation of international law in a city where there might be civilians.

As far as accomplishing this goal of "rooting out fighters" and/or providing "security and stability" for the January 30 election, we can see that neither have been accomplished.
They have effectively spread the resistance further around the country. We have another sort of "mini-Falluja" situation in Ramadi, where rather than sectioning off the entire city and doing what they did to Falluja, they're doing it neighborhood by neighborhood. In essence, any fighters who are there are moving to a different neighborhood when one is being hit, and then moving back when the military goes to another neighborhood.

They're going to have to employ the same strategy in Samarra, in Baquba, in Bayji, in Mosul and even in parts of Baghdad. It's a strategy that the U.S. military has been using since almost the beginning of the occupation--using very heavy-handed tactics to fight the resistance. But by doing so, they're just spreading the resistance to other areas around the city or the country, and essentially creating more resistance.

WHEN YOU say the U.S. is spreading the resistance, is that because actual individuals go to other cities and start recruiting and organizing there? Or, is it because the horrors that the U.S. has caused have angered people who then join the resistance?

Plus, if you and I are brothers, and we're living in a predominantly tribal culture like Iraq, and someone kills you, if I don't go avenge your death, then I dishonor the family. In that way, when we look at the fact that well over 100,000 Iraqis are estimated to have died during the occupation--the vast majority of them at the hands of occupation forces--it's a simple matter of doing the math to figure out how many people are in the resistance.

LAST WEEK, there was triumphant talk by U.S. officials of an assault on an insurgent camp led by Iraqi ground forces with U.S. air support. Do you think this is a new turn in the occupation?

NO, ACTUALLY I think it's an old propaganda tactic being used by the military in Iraq, and being trumpeted by the media here in the U.S. We're already seeing massive discrepancies in the reporting on this situation.

It's similar to a situation I reported on back in December 2003, which happened in Samarra, where the U.S. military claimed that they were attacked by a large contingent of resistance and killed 48. Then, magically, the number went up overnight to 54.

I went up to Samarra myself to report on that. I interviewed doctors at the hospital. I went to the morgue. I interviewed civilians at the scene. Everyone said that eight people were killed, and they were all civilians. It was simply a propaganda smokescreen spewed out by the military to try to cover up the fact that they made a mistake, they were attacked and they killed some civilians.

Already, with the situation you just discussed, Reuters initially reported that Iraqi government commandos attacked an isolated camp 100 miles north of Baghdad. But there have been discrepancies in different reports coming from the military, from Reuters, from the Associated Press, Agence France Presse, which dispute where this took place, when exactly this took place, and how many people were killed.

There's much confusion, and it's going to take some time to get to the actual truth of it. But it does look pretty clear already that the truth will be quite a bit different than the initial report released by the military.

MEANWHILE, ONE of the things missing from the U.S. media is reporting on the increasingly frequent bombing of Iraq by the U.S.

THAT'S A very important point. It definitely is one of the most underreported things in Iraq. Daily, there are many, many air missions being flown, and huge amounts of bombs being dropped. In fact, the vast majority of Iraqi civilians killed have died as a result of U.S. warplanes dropping bombs.

For example, in Falluja, it's pretty safe to say that a large percentage of the estimated 3,000 people killed there were killed by U.S. warplanes. I can't tell you how many reports I heard from refugees discussing how entire houses, entire blocks of houses, were bombed to the ground by U.S. warplanes. Even to this day, bodies lay under the rubble of houses because of this.

It's a form of collective punishment, and it is definitely intended to send a clear message that if you mess with the U.S. military, you and anyone around you is going to be blown out of existence. More often than not, it's the case that when these bombs drop, it's civilians who are caught in them, not the fighters.

For example, several people reported to me that the way the U.S. military was getting its intelligence on where to bomb in Falluja prior to the siege of the city in November was that any Iraqi could literally go up to the U.S. base outside of Falluja and say, "Yes, in this house, there's a fighter." They were paid between $100 and $500, and then that house was bombed. So this was a method that many people used to settle old scores and make some cash.

On the flip side, of course, sometimes, they were right. Sometimes, there were fighters there, and they would be killed. But more often than not, as you can imagine, that wasn't the case.

THE BUSH administration says the Iraqi elections show that "democracy is on the march," and that this is justification enough for the invasion and occupation.

WE CERTAINLY can't say that there's democracy in Iraq just because there's been an election, or something resembling an election. An election does not mean democracy. Democracy means the will of the people is being carried out by the government that they voted into place. And so far in Iraq, that isn't happening.

If we're going to measure success in Iraq, I think we could measure it by how many promises of the Bush administration have come to reality on the ground. Promises like bringing Iraqis jobs and a better life. Letting them rebuild their country. And letting them have a truly representative government--a government of their choosing.

On just about every level you would measure it, things are worse now in Iraq than they were prior to the invasion. It's two years into the occupation, and there's certainly been enough time for the U.S. to get its act together and try to provide some of these things.

People ask me, "What are the success stories," or "What good has come of it?" I've heard Iraqis say that the only thing good that has come from the invasion is the fact that Saddam Hussein has been removed. But aside from that--and I'm just quoting Iraqis here--in every other aspect, things on the ground there have gotten worse since the invasion.

ONE FEATURE of mainstream media coverage has been the idea that there is a deep-seated antagonism in Iraq between Sunni and Shiite Muslims. Do you think Iraq is moving toward civil war?

THERE IS definitely an over-focus in the Western media about this threat of civil war between the Shia and the Sunni. There are some politicians and some religious leaders in Iraq who think it is definitely a possibility, but most other people--and certainly the common people I interviewed--said, "No, this is really not a threat. We've never had a civil war."

In fact, when I would ask people if they were Shia or Sunni, the most common response was, "I am Muslim, and I am Iraqi," and they wouldn't even tell me.

Another thing to keep in mind is that Iraq is primarily a tribal culture. Many of these tribes are half-Shia and half-Sunni, and so many marriages are [between] Shia and Sunni. When I would ask them what they thought of the potential for civil war, people would joke with me, "Oh, civil war? That means I would have to attack my wife?" They laughed at it.