Lance Selfa, author of The Democrats: A Critical History, unravels the myths circulating about the January 1 "fiscal cliff"--and explains what's really at stake.

NO DOUBT you've already heard it many times from the media and the pundits: If there isn't a "bipartisan compromise" between the White House and the Republican-led House of Representatives before year-end, the economy will careen off a "fiscal cliff." Recession, economic ruin, a loss of "business confidence" and a host of other evils will be visited on the U.S.

What you probably haven't heard is the way liberal economist James K. Galbraith describes the "fiscal cliff": "It's a crisis that was contrived a year ago...[T]hese deadlines...were established to create a climate of crisis when things could be done that could not immediately be subject to debate as you get before an election."

Galbraith is right. The "fiscal cliff" is the product of two previous deals between the White House and Congress.

In the lame duck session of Congress following the 2010 midterm election--when the Democrats were in charge of both houses of Congress--Obama agreed to extend for two years the massive tax cuts from the Bush years, including on the wealthiest Americans who benefited most. In exchange, Obama won an extension of supplemental unemployment benefits and a temporary cut in the payroll tax that all working Americans pay to fund Social Security and Medicare. 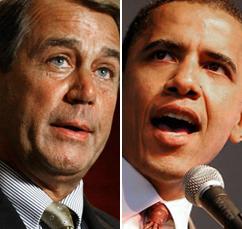 Then, during the debacle over the lifting of the federal government's "debt ceiling" in August 2011, Obama and the Tea Party-addled Republican House agreed, as a condition of lifting the ceiling, on an austerity plan that would force "deficit reduction."

The last-ditch compromise was that Obama and congressional leaders would appoint a "super-committee" of congressional representatives to propose specific cuts for Congress to enact. If the super-committee couldn't come to an agreement, than automatic spending reductions--called "sequestration" in Washington-speak--would go into effect on January 1, 2013. These cuts would affect both military and non-military "discretionary" spending--in other words, just about everything the government does besides paying for "entitlement" benefit programs like Social Security, Medicare and Medicaid.

As could be predicted, the super-committee, meeting as it did with an election season getting underway, didn't agree on any proposals. So the automatic spending cuts are set to take effect at exactly the same time that the tax increases will come.

It's true that raising taxes and cutting spending at the same time is a recipe for an economic slowdown--and maybe even tip the U.S. economy back into recession. The Congressional Budget Office has estimated that if the Congress and White House can't come to an agreement to avoid the fiscal cliff, the economy will fall into recession for the first half of 2013 before recovering in the second half. That means a drop in job creation, rather than the recent months of modest increases, and everything else associated with an economic slump.

Such an outcome should be unacceptable, but these consequences would take place gradually over the course of 2013. So in reality, the "cliff" is more of a "slope." At any point in 2013, Congress and the White House could agree to roll back many of these deflationary policies.

But politicians and the media keep flogging the "fiscal cliff" metaphor because they want to create a sense of crisis. Under pressure to "do something" to avoid "going over the cliff," the lame-duck Congress could pass legislation with far-reaching and harmful impacts on the social safety net.

That's why the forces most intent on forcing through cuts to entitlement programs like Social Security, while preserving tax cuts for the rich, are hyping the "fiscal cliff."

AS THE sides have formed, a freshly re-elected President Obama is posing confidently as a "fighter for the middle class" who will carry out his mandate to raise taxes on the richest Americans. He is daring the Republican House to send him a bill that extends the Bush tax cuts for 98 percent of Americans, while making the rich "pay a little bit more"--by letting the highest marginal income tax rates lapse back up to the levels they were at during the Clinton years.

Obama certainly has public opinion on his side. Not only did he win re-election after continuously vowing during the campaign that income taxes on households making more than $250,000 a year would rise, but multiple opinion polls show that about two-thirds of Americans want to see increased taxes on the rich. So Obama appears confident and willing to take the fight to the Republicans.

Liberals who were bitter about Obama's cave-in on the Bush tax cuts in 2010 are praising the president for standing tough this time. After a rare meeting between Obama and leaders of organized labor and inside-the-Beltway liberal organizations, AFL-CIO President Richard Trumka told reporters, "We are very, very committed so that the middle class and workers don't end up paying the tab for a party we didn't get to go to, and the president is committed to that as well."

So are the Democrats ready to fight this time for the working-class Americans they always talk about during election season and then forget when they get to Washington?

The Democrats are likely to get their goal of higher taxes on the rich this time around. Even Republican House Speaker John Boehner has conceded that he will allow the GOP-run House to vote for increased "revenues" (a.k.a. taxes) in whatever "fiscal cliff" deal emerges.

The Bush tax cuts expire on December 31 if nothing is done to extend them. So if the White House and Congress can't come to a deal and everyone's taxes go up on January 1, then the Democrats will introduce legislation to "cut" taxes for 98 percent of Americans and dare the Republicans to vote "no" and hold out for preserving lower taxes for the top 2 percent.

Both during and after the presidential campaign, Obama has been careful to keep his promises narrowly focused on winning increased taxes on the rich. He and his lead negotiator, Treasury Secretary Tim Geithner--a lame duck himself since he is expected to leave his position, and just plain lame to boot--haven't made firm commitments on much else in the negotiations.

While most of Washington is focusing on the Bush tax cuts for the richest 2 percent, there's far less being said about the expiration of the payroll tax holiday--something that will sock every working person immediately--or the expiration of supplemental unemployment benefits.

The White House has made noises about extending these two measures, but it hasn't drawn any "red lines" around them. So these attacks on working-class living standards could still emerge in a "fiscal cliff" deal, even if taxes on the rich increase.

And anyone who believes a newly emboldened Democratic Party will stand up for working people should consider what Democrats and Republicans have already agreed to. The same bill that set up the automatic spending cuts on January 1, which the politicians are decrying today, established a 10-year-long program of "capping" non-defense discretionary spending.

So Congress and the president have already agreed to cut $1.5 trillion from programs like Pell Grants, housing assistance, Head Start and care for veterans over the next decade.

FOR THE Washington establishment, Obama included, the "fiscal cliff" is about much more than "revenues."

Because all sides of the fiscal cliff debate operate under the rubric of "deficit reduction," the short-term issue of the January 1 deadline has become enmeshed in the Washington establishment's long-term obsession with cutting entitlement programs. As David Wooner of Next New Deal wrote in Salon:

[F]or the most part, the public discourse on how to avoid the "fiscal cliff" and fix our economy has been centered not on jobs or the vast structural inequality that now separates the top 1-2 percent from the rest of us, but on the deficit. This is unfortunate, for it means, in essence, that the country's economic agenda is still very much in the hands of the conservative right; that we are still focused not on the cause of our economic woes--a collapsed economy brought on by the worst financial crisis since the Great Depression--but on the by-product: the vast fall-off in federal, state and local revenue that naturally came about as a result of this collapse.

It makes no sense for politicians to be talking about changing programs like Social Security and Medicare, which may face fiscal challenges decades from now, in the context of a short-term fix for government fiscal policy. But the austerity-obsessed political leaders of both parties don't want to let this "crisis" pass without exacting a pound of flesh from the rest of us.

The Republican counteroffer to the White House budget plan includes a proposal to "fix" Medicare by lifting the eligibility age from 65 to 67. This would inflict needless suffering and financial stress on millions of seniors--but it likely wouldn't even save the government much money. And it would be an opening wedge in a longer-term assault on entitlements.

The White House dismissed the Republican offer as unserious, but we shouldn't assume that proposals to meddle with Medicare, Medicaid or Social Security are "off the table"--if the White House wants to get a deal.

These concessions may raise their ugly heads again if Obama believes that he can obtain the bipartisan "grand bargain" on deficit reduction that he's sought for four years.

The good news is that opinion polls show average Americans to be even more opposed to meddling with Medicare and Social Security than they are supportive of raising taxes on the rich. So if unions, advocates for the elderly and health care activists want to draw their own lines in the sand against the Washington establishment's desire to cut these important programs, they'll have millions standing behind them.