Why are Democrats behind in Wisconsin?

WISCONSIN VOTERS will go to the polls on Tuesday, June 5, for the recall election that pits the hated Republican Gov. Scott Walker against Tom Barrett, the mayor of Milwaukee and the same Democrat that Walker defeated in the 2010 regular election.

In Wisconsin and across the U.S., huge numbers of people who were inspired by the uprising early last year against Walker and his union-busting austerity program are hoping Walker will be kicked out of office.

Unfortunately, opinion polls over recent weeks show Walker with a narrow but consistent lead over Barrett.

If those polls hold up, it will be a painful loss for the movement that emerged from the uprising, when thousands of unionists, workers, teachers, students and citizens of Wisconsin occupied the state Capitol in response to Walker's "budget repair bill" that attacked public-sector unions and slashed away at social programs.

The occupation was ended by labor officials and Democratic Party leaders who argued that energy should be redirected into recall efforts against Walker and Republicans in the state senate. 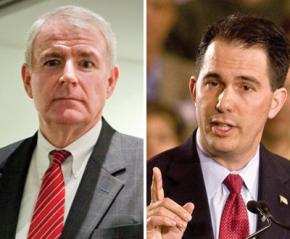 The recall of Republican state senators did win two seats for the Democrats, but that wasn't enough to overcome the GOP majority.

As for Walker's recall, an army of volunteers gathered 900,000 verified signatures to initiate the process. Unions spent $4 million on its failed contender in the Democratic primary, Kathleen Falk, and then millions more on the general election.

For his part, Walker has pulled in tens of millions of dollars in campaign contributions from wealthy out-of-state donors to finance his campaign. But the Democratic Party itself is ultimately responsible for its candidate's poor performance.

EARLY ON, the Democrats conceded the debate about unions to Walker. During the Senate recall races last summer, Democrats quietly dropped restoring collective bargaining and union rights from their campaign speeches.

In this spring's primary to choose a candidate against Walker, other Democrats attacked Falk, a former Dane County Executive and the labor leadership's favored candidate, as being in the pocket of unions. In an op-ed supporting Barrett, former Madison Mayor Dave Cieslewicz jabbed at Falk: "A candidate beholden to big unions is no more appealing to independent voters than one who answers to the Koch brothers."

During a debate with Walker, Barrett made a point to mention that he was not labor's candidate. Rather than put up a defense of unions, the Democrats have treated them as supporters of "special interests" and an embarrassment.

Barrett has ceded further ground to Walker on austerity. Walker's rationale for budget cuts has been a familiar one: the state is out of money and needs to control its expenses. Yet despite the fact that Wisconsin's corporations are taxed at a rate below the national average--and that the current tax burden is primarily on Wisconsin's middle class rather than the rich--Barrett made no attempt to challenge Walker's claims.

Instead, Barrett emphasized that he won't increase taxes on corporations and the wealthy. He told a Milwaukee radio station, "It is certainly my hope that by the end of my first term, at the end of my second term, and at the end of my third term that Wisconsin will take in less tax revenues from its citizens and businesses each year."

While Barrett says he will reverse corporate tax cuts that Walker passed in January 2011, the Milwaukee Journal-Sentinel reports that "he doesn't want to raise taxes beyond the levels they were at when Walker took office." This means that while Barrett could shift some priorities around, he wouldn't be able to restore most of Walker's cuts, including $1.25 billion taken from education and $500 million from Medicare.

During last year's uprising, Barrett proposed an "alternative budget repair bill" that included Walker's cuts to benefits and pensions, but extended them to police and firefighters, whom Walker had spared.

Wisconsin Democrats have complained that the national party has not channeled enough resources into the recall campaign. But when the Democratic National Committee did get involved, it was to reinforce the same political message--by sending former President Bill Clinton, who enforced neoliberal policies at the national level in the 1990s and who recently praised Mitt Romney's business record, to campaign with Barrett.

The right-wing Wisconsin Club for Growth has put up billboards pointing out that Barrett used Walker's anti-union Act 10 to extract concessions from Milwaukee municipal employee unions last year. This gave the right more ammunition to claim that Walker's measures were necessary.

The myth of the overcompensated public employee has been debunked thoroughly. However, in a state with a declining manufacturing sector and high unemployment in rural areas, many people see little reason to stand up for the collective bargaining rights of 130,000 unionized public employees.

Kathy Cramer Walsh, a UW political science professor who surveyed political attitudes in northern Wisconsin, told the Capital Times: "Many of the people's take was 'Here I am, working hard, I haven't fixed my teeth in seven years, and I'm paying high taxes for these great [public] pensions.'"

Although Walker's baiting of public employee's has gained some traction, labor could counter his "divide-and-conquer" tactics by supporting universal health care and access to education, and putting the blame for the budget crisis on corporations and the wealthy.

Creating this class-wide solidarity would require a new kind of labor movement--one closer to a social movement, including organized and unorganized workers, rather than the current service model of unions as "insurance companies and grievance machines," to use the words of author Stanley Aronowitz.

Unions must challenge austerity and insist that the rich pay for the crisis they caused. But this can only happen if labor breaks with the Democrats and their neoliberal politics.

The Teaching Assistants' Association (TAA) at the University of Wisconsin-Madison, the union representing graduate student employees, voted--in a controversial and close decision--to withhold endorsement from Tom Barrett at the last membership meeting of the semester.

At a membership meeting in March, the TAA had previously voted to withhold endorsement from Falk, too. Though Falk was the union leaders' top choice, she would not agree to the goal of a full restoration of Walker's public-service cuts or a restoration of public workers' benefits. She also campaigned on her record of slashing $10 million from workers' wages and benefits "without taking away collective bargaining rights," while she was Dane County Executive.

Members of the TAA who opposed endorsing Falk or Barrett argued that the original aims of the Wisconsin uprising in winter 2011--that is, to kill the bills attacking union rights and drastically cutting social services--must not be reduced to the electoral aims of forcing Republican politicians out of their seats.

After the primary, other TAA members argued that the union should "Grin and Barrett" and support Barrett's campaign, even though he is not the ideal candidate, because he is now the only chance to unseat Walker. Recalling Walker has for many become the only way to imagine victory, and there was immense pressure to campaign for him.

But this political orientation, which puts winning elections--and more specifically, electing Democrats--at the center of movement strategy, is what led to the dismantling of the Capitol occupation last year and continues to threaten the vitality of the labor movement.

While rightly identifying the danger of Republican politicians, labor's Democratic supporters ignore the fact that forcing workers to pay for the economic crisis and undermining the power of unions are points of broad consensus between the Democratic and Republican Parties.

As AFSCME Local 171 member Mike Imbrogno said of his union in an interview with the Isthmus, "We supported [former Democratic Gov.] Jim Doyle when he ran on reducing the state workforce by 10,000 jobs, and we gave him money to do that. Why are we paying for them to lay us off and to furlough us?"

If Walker wins on Tuesday, it will be a blow to many people's morale. But we shouldn't forget that in a period of rising class struggle on a national and global scale, it remains possible to build a fighting labor movement here in Wisconsin and elsewhere. Whoever occupies the governor's seat on June 6 shouldn't anticipate an end to the battle. The future of our movement will depend on taking an independent stand for workers.