Hatred strikes in the “capital of bigotry”

Nicole Colson looks at the political questions surrounding the mass shooting in Arizona--and argues that it's more important than ever to stand up to the right wing.

WILL THE U.S. media and political establishment confront the hard questions about the connections between the mass shooting in Arizona and the violent rhetoric of the Republican Party's right wing?

That issue loomed over the aftermath of the January 8 nightmare at a Tucson, Ariz., shopping center that left six people dead and at least 14 wounded. The alleged gunman, 22-year-old Jared Lee Loughner, apparently targeted U.S. Rep. Gabrielle Giffords--a moderate Democrat recently re-elected to her House seat, who was hosting an event at a local Safeway to meet with constituents.

Giffords survived being shot through the head at point-blank range, though she was in critical condition at the end of the weekend. Among the dead were federal judge John Roll, and 9-year-old Christina Taylor Green, who was recently elected to student council in her grade school and wanted to meet her representative. 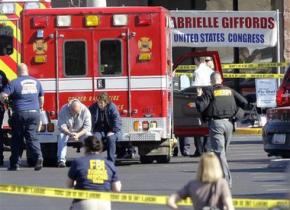 His political beliefs are also uncertain. One woman who claimed she knew Loughner as a teenager described him as a liberal, but Loughner more recently attempted to join the military, and was rejected for undisclosed reasons.

According to Fox News' Greta Van Susteren, a leaked Homeland Security memo raises speculation that Loughner was attracted to American Renaissance, a racist and anti-Semitic organization. According to the memo:

Strong suspicion is being directed at AmRen / American Renaissance. Suspect is possibly linked to this group. (through videos posted on his myspace and YouTube account.). The group's ideology is anti government, anti immigration, anti ZOG (Zionist Occupational Government), anti Semitic. Gabrielle Gifford is the first Jewish female elected to such a high position in the U.S. government. She was also opposite this group's ideology when it came to immigration debate.

Whatever else emerges about Loughner in the days to come, though, the wider context for this tragedy is clear: The abuse and hate spewed by the right-wing Tea Party and their allies in the Republican Party--not only against scapegoats like immigrants and Muslims, but also establishment politicians who don't agree with every vile prejudice the right promotes.

When you look at unbalanced people, how they respond to the vitriol that comes out of certain mouths about tearing down the government. The anger, the hatred, the bigotry that goes on in this country is getting to be outrageous. And, unfortunately, Arizona, I think, has become sort of the capital. We have become the Mecca for prejudice and bigotry...

People tend to pooh-pooh this business about the vitriol that inflames American public opinion by the people who make a living off of that. That may be free speech, but it's not without consequences.

ARIZONA Sen. Jon Kyl couldn't wait to denounce Dupnik for his statement, telling Face the Nation the following day, "I didn't really think that that had any part in a law enforcement briefing."

But the truth is that conservative Republicans like Kyl have been whipping up exactly the kind of vitriol Dupnik was referring to--and their intolerance has found a wide hearing in the Tea Party movement and its far-right fringes.

Sadly, the Democrats have been unwilling to call out Republicans for the hatred they stoke. Barack Obama has the worst record in this regard--he has refused every opportunity to respond to nakedly racist attacks on him as a supposed non-citizen and closet Muslim, no matter how vicious they become. And with every retreat by Democrats, the voices of hate have grown louder.

Giffords has been targeted for violence before. After she cast a vote in favor of the health care law last year, her office door in Arizona was shot out, apparently by a pellet gun. In August, police removed a protester from a Giffords constituency meeting after a gun he was carrying fell out of its holster and onto the floor.

During last year's elections, Giffords was among 20 Democrats targeted by Sarah Palin in a Facebook posting showing a map of the U.S. with target crosshairs over 20 congressional districts. The map was linked to a message sent by Palin to her followers on Twitter that read: "Commonsense Conservatives & lovers of America: 'Don't Retreat, Instead RELOAD!'"

Then there's Giffords' opponent last November: Tea Party candidate Jesse Kelly, whom Giffords narrowly beat to win re-election. A former Marine, Kelly appeared on his campaign Web site in camouflage gear and holding a gun to promote an event where supporters were encouraged to shoot an automatic rifle. "Get on Target for Victory in November," read the message from Kelly. "Help remove Gabrielle Giffords from office. Shoot a fully automatic M16 with Jesse Kelly."

As SocialistWorker.org pointed out a year ago in the aftermath of the health care law passing, the supposedly "grassroots" protests by Tea Party groups "displayed the same naked racism (and naked stupidity) as similar protests in the past--references to Obama as a Nazi, dressed in Hitler garb; questions about where he was born; references to the health care bill as a communist plot that would mean 'death panels' for senior citizens."

During one demonstration outside the Capitol in Washington, Tea Party protesters surrounded Rep. John Lewis, a former leader of the civil rights movement, and called him a "nigger." Rep. Barney Frank was denounced as a "faggot."

Various Republicans openly incited the Tea Partiers--as when GOP lawmakers stood on a Capitol building balcony and waved yellow "Don't tread on me" flags at the crowds of right-wing demonstrators assembled outside on the day of the House vote on health care.

The violent rhetoric continued into the congressional election campaign. In Nevada, Tea Party favorite Sharron Angle, who narrowly lost her race for Senate against Majority Leader Harry Reid, spoke about the need to pursue "Second Amendment remedies" if political change lags behind the Tea Party's fantasies. As SocialistWorker.org wrote:

Such rhetoric is a barely disguised attempt to whip up the worst elements of the right wing. These kinds of tactics are hardly surprising, however. For all the claims that the 'tea partiers' are an independent 'grassroots' movement, the truth is that they represent, for the most part, the same old reactionary core of the Republican Party...

Today, the tea party protests are part of a "movement"--and it should be emphasized that it is by no means the mass movement that the media portrays it as--that recycles these same myths and lies for a new generation.

Whether or not Loughner was a Tea Party follower, it's not unreasonable to think that the virulent tone and actions of the right shaped the climate in which he acted.

FOLLOWING THE shootings, the Republican establishment--no doubt recognizing the disgust with which most people now view Sarah Palin's "target" map--tried to pull back from its more incendiary rhetoric. House Speaker John Boehner, for example, offered condolences for the victims, and praise for Giffords in particular.

But Republican leaders couldn't completely muzzle the voices of hate in their party--there are just too many of them.

Sarah Palin's spokesperson Rebecca Mansour, for example, claimed that Palin did nothing wrong by putting out a map with crosshairs on Giffords' district--and added, for good measure, that Loughner is a "left-wing liberal."

"We never ever, ever intended it to be gun sights," Mansour claimed in a radio interview with Tammy Bruce. "It was simply cross-hairs like you'd see on maps," she said, suggesting that this was a "surveyor's symbol."

Of course, as Politico.com's Ben Smith noted, Palin herself referred to the symbol as a "'bull's eye icon" immediately after the election.

After the shootings, Palin's flaks were quick to delete the flood of negative comments on her Facebook page that took Palin to task for her incendiary rhetoric against Giffords. But as one commenter pointed out, Palin's people left up a comment that celebrated the death of 9-year-old Christina Taylor Green. "It's ok," the comment read. "Christina Taylor Green was probably going to end up a left wing bleeding heart liberal anyway. Hey, as 'they' say, what would you do if you had the chance to kill Hitler as a kid? Exactly."

More nauseating--if that's possible--was Tea Party Nation founder Judson Phillips, who complained in a statement released before it was even confirmed that Giffords was alive that he and others on the right were being unfairly singled out. Phillips also took the opportunity to remind everyone that Giffords is a "liberal." In fact, she is a former Republican turned conservative "Blue Dog" Democrat.

In a separate statement sent directly to Tea Party Nation members, Phillips added, "The hard left is going to try and silence the Tea Party movement by blaming us for this." Bill Clinton, he wrote, used the 1995 Oklahoma City bombing to "blame conservative talk radio, especially Rush Limbaugh...The tactic worked then, backing conservatives off and possibly helping to ensure a second Clinton term."

Right-wingers like Phillips are right to be worried about what the future holds for them. The shooting in Arizona has demonstrated in the most shocking way how easily the hate-filled rhetoric of supposedly respectable politicians can spill over into violence.

Whether it's the wave of Islamophobia that leads to the stabbing of a New York City cab driver, or a political assault on immigrant rights that turns into actual anti-immigrant violence, or an anti-abortion climate in which doctors can be assassinated as they attend church services, none of these acts occur in a vacuum.

Would Tea Partiers like Phillips be complaining about a "rush to judgment" if, say, the shooter had been an undocumented immigrant? Or as filmmaker Michael Moore asked on Twitter, "If a Detroit Muslim put a map on the web w/crosshairs on 20 pols, then 1 of them got shot, where would he b sitting right now? Just asking."

Phillips' reference to the bombing of the federal building in Oklahoma City in 1995 is telling. That murderous attack also took place in the wake of a midterm election in which Republicans swept to power while advocating "small government" and budget-slashing.

Very quickly, Newt Gingrich and his fellow Republican "revolutionaries" in Washington proved that they were devoted to corporate interests instead of the "little guy" they claimed to represent. But in Oklahoma City, Timothy McVeigh showed the consequences of the Republicans' anti-"big government" rhetoric when it is seized on by the far right as an excuse for terrorism.

The real agenda of the right wing--whether in the form of slashed budgets and corporate welfare, or vile hate and racist scapegoating--is opposed by a large majority of people. But it will take a challenge from the grassroots to expose the truth about the Republicans and the Tea Party--and to build an alternative that puts the interests of working people first.