An open letter to Barack Obama

Haidar Eid, a professor of English, political commentator and resident of Gaza City, asks whether the president of the United States remembers anything from his long-ago meeting with the late Palestinian intellectual Edward Said.

You will probably not read this letter due to your busy schedule and the huge number of messages you receive from presidents, kings, princes, sheiks and prime ministers. Who is a Palestinian academic from Gaza, after all, to have the guts to write an open letter to the president of the United States of America?

What has triggered this letter is a picture of your Excellency sitting with the late Palestinian intellectual Edward Said. That, of course, happened before 2004--i.e., before you underwent a process of metamorphosis which I personally think is unprecedented in history.

Seeing you with Edward Said, I must say, surprised me. Said, a true public intellectual, must have said something to you about the suffering of the Palestinian people. In the picture, you and your wife seem to be listening attentively and admiringly to him.

But the point remains: Did you really understand his eloquent, passionate defense of the rights of the indigenous inhabitants of Palestine? Judging from your recent policy shifts, I very much doubt it. It is precisely the incongruity between the photograph and these policy shifts that has prompted this letter. 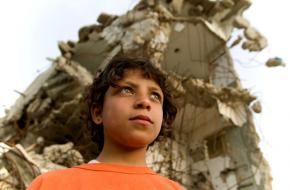 The whole world celebrated your election as the first African American president of the U.S. I did not. Neither did the inhabitants of the concentration camp where I live.

Your sympathetic visit to Sderot--an Israeli town which was the Palestinian village of Najd until 1948, when its people were ethnically cleansed--your first visit three years earlier to a kibbutz in northern Israel in support of its residents, and your pledge to be committed to the security of the state of Israel and its "right" to retain unified Jerusalem as the capital city of the Jewish people, to give but few examples, were all clear indications of where your heart lies.

Another reason for the writing of this letter is shock at the indifference and arrogance with which Secretary of State Hillary Clinton dismissed Palestinian concerns about Israel's illegal Jewish-only settlements in the West Bank. Only a few weeks ago, you made the admirable statement that all Jewish settlement construction must halt, and you made it clear that this included the expansion of existing settlements as well as the construction of new settlements.

However, when Israeli Prime Minister Benjamin Netanyahu let it be known that he had no intention of stopping settlements, you missed a historic opportunity to draw a line--no more billions and no more weapons for Israel unless and until this condition is met. Now Secretary of State Clinton has the Herculean task of pretending that your position on Jewish settlements has not changed, though it is clear you have chosen not to use the very real power at your disposal to bring Israeli policy into line.

About six months after your election, you gave a speech in Cairo, addressed to the Arab and Islamic worlds, which some people found impressive. I found it impressive in form, but not in substance, because your actions have not matched your rhetoric.

Why did I not buy the new language of the new American administration? Because while you were giving your speech, we were burying my neighbor, a terminally ill patient who needed treatment in a hospital abroad, since--thanks to the siege imposed by your own administration and Israel on the Gaza Strip--the facilities that would have saved his life are not available in Gaza. Like more than 400 terminally ill people in Gaza, my neighbor lost his life.

In spite of the fine Arabic words of peace, "Salaam aleikum," you made it crystal clear that the point of reference in any negotiations in the Israeli-Palestinian conflict is Israel's security. By doing that, Mr. President, you are effectively marginalizing the whole issue of Palestine, and unfortunately setting the stage for renewed Israeli assaults against a starving Gaza--an entity that has, thanks to your "unbreakable" ties with Israel, been transformed into the largest concentration camp on Earth.

Your failure to support the Goldstone report from the United Nations, and your indifference, not to say your contribution, to Palestinian suffering and the process of "politicide" against the Palestinian people of Gaza is, to say the least, unfathomable, coming from a man who listened so earnestly to Edward Said.

Your advisers must have told you about the cutting off of medicine, food and fuel to the concentration camp where I live. Patients in need of dialysis and other urgent medical treatment are dying every single day. A majority of our children, many the same age as your two beautiful daughters, are badly undernourished.

You must have skimmed through the executive summary of the Goldstone report detailing the horror inflicted on 1.5 million civilians for 22 days--horror caused by F-16s, Apache helicopters and phosphorus bombs made in American factories. Hundreds of children were burnt to death by phosphorus bombs; pregnant women were brutally targeted in what Israeli soldiers boasted of on their T-shirts: "1 bullet, 2 kills." And yet, not a single word of sympathy, Mr. President!

Edward Said had this to say upon his first visit to Gaza: "It's the most terrifying place I've ever been in...It's a horrifyingly sad place because of the desperation and misery of the way people live. I was unprepared for camps that are much worse than anything I saw in South Africa." This was back in 1993, Mr. President, before conditions dramatically deteriorated. Gaza has now become, as the leading Israeli Human Rights Organization B'Tselem describes it, "the largest prison on Earth."

Unlike your predecessor, you seem to be a smart man. You must have realized that a two-state solution has been rendered impossible by Israeli colonization of the West Bank, by the war on Gaza, by the construction of the apartheid wall, by the expansion of so-called Greater Jerusalem, and by the increase in the number of Jewish settlers in the West Bank. You must have realized also that there are 6 million refugees, most of whom live in miserable conditions waiting for courageous, visionary leaders committed to true democracy, human rights and international law to implement UN resolution 194.

And yet, you and your secretary of state, like every U.S. president since 1967, have decided to support Israel in creating conditions that made the two-state solution impossible, impractical and unjust.

Were you a supporter of the Bantustan system in South Africa under the apartheid system? Are you opposed to equal rights and the transformation of Israel/Palestine into a state for all its citizens? The two-state solution means the Bantustanization of Palestine, a solution you, to our knowledge, never supported for South Africa.

Are you, Mr. President, opposed to civic democracy, which is the demand of most Palestinian civil society and grassroots organizations? This is what people like Martin Luther King and Steve Biko died for. Was Nelson Mandela wrong to spend 27 years of his life in prison in pursuit of justice by demanding equality for the indigenous people of South Africa? Do you realize that what you are supporting in the Middle East is a racist solution par excellence? A solution based on "ethnic nationalism"?

Your secretary of state and your envoy to the Middle East unashamedly stood, with beaming smiles, next to Avigdor Lieberman, who not only defends openly the ethnic cleansing of Palestinians, but also calls for a new genocide in Gaza! Do you realize, Mr. President, that this Hitlerite fascist might become Israel's next prime minister, thanks to your administration's complacency and support?

Our only immediate demand is that your administration insures that Israel fulfills its obligations in terms of international law. Is that too much to ask?

We, the Palestinian people, are fed up!